up with figs (rerun), mug shot 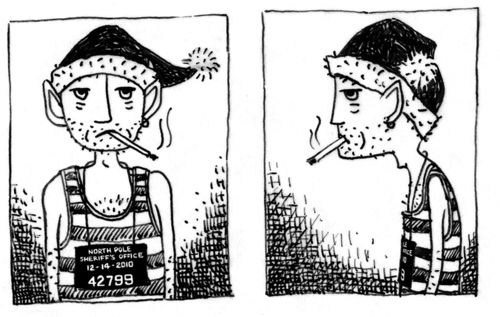 ‘Twas weeks before Christmas, when all through the house

Several creatures were stirring, including Larry, the louse.

The stockings were hung by the chimney by Claire,

In the hope that her boyfriend would put a ring in there.

When what to her wondering eyes should appear,

But a wee little man who whispered, “All clear?”

And then in a twinkling she heard on the roof,

The thumping and banging, which meant she had proof.

He was dressed like a wino, from his head to his foot,

And his wifebeater was covered in ashes and soot.

And she knew from that moment that he wanted her purse!

The stump of a blunt he held tight in his teeth,

And the smoke it encircled his head like a wreath.

He spoke not a word but went straight to his work,

Then sniffing the air, he turned, with a jerk.

He flew through the air like an arthritic old elf,

She reached out and grabbed him, in spite of herself.

Claire sprang to her phone, to give the cops a whistle,

They arrived at her door, like a heat-seeking missile.

“Off to the pokey!” the exclaimed as they drove out of sight.

“Merry Christmas to All! And to all a good night!”