Lucy has been getting much, much less puppy-ish. She can be calm and sane and reasonable, as long as there are no cats around. She does the outside stuff outside and when inside, she is mostly trustworthy. So much so that this morning, when I thought she was chewing on an approved chew toy, I stopped paying much attention to what she was doing. But what she was doing was this: 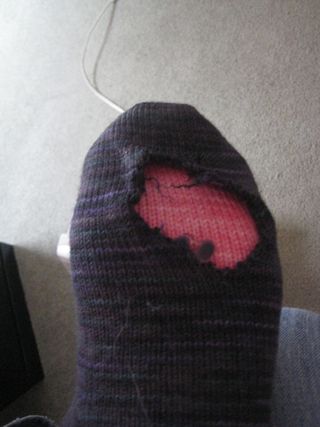 (Two notes: the sock wasn't on my foot at the time and, in this picture, I am also wearing a pink sock and don't have some obscure foot disease.)

Those black socks, lovingly knitted by yrs trly out of a delish skein of socks that rock in one of their raven colors, were my absolute favorites. I weep. I gnash. I'd rend my garments but, well, that's the cause of the weeping and gnashing in the first place. 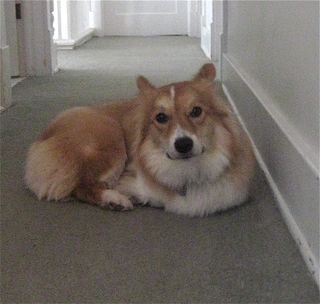 In related news, it's a good thing that I've got half of another pair almost done, eh? They won't be as good or as perfect, mind. But one does what one can.

Even when they aren't remotely puppyish they can do these sorts of things. Stella is four and ate something she shouldn't have. Ended up in the hospital. $800 later...grrr

Note to self: do the laundry. (Sam likes panties. Dirty ones.)

Do you have any raven left? If not, cut off the offending toe and put up the sts and put on a bright, sparkly new toe that only you will know about with your shoes on.

PS. they are cute so we won't kill them.

Lucy is waaay too cute to me mad at. (Yep, grammar issues there.)