and now we are one

Officially, Lucy's birthday is February 29. You can see the issues this causes. The house is split on the best way to handle it. I say we should celebrate on March 1; Maddy believes the proper date is Feb. 28.*

So look at the rest of this post when you feel you should.

Today (or tomorrow), Lucy turns one. 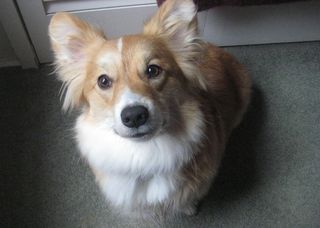 Photo snapped minutes ago. Now she is under my desk, hogging my space heater and making the whole room smell like mulch because she was just out digging in the mud. Oh, the glamour.

She still acts like a puppy, mind, snapping into fits of unstoppable enthusiasm for walks and socks. But she is settling down, too. She's a good girl, mostly, even if she makes us batty at times.

But we've come a long way from this... 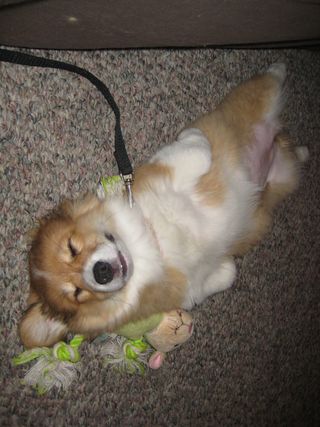 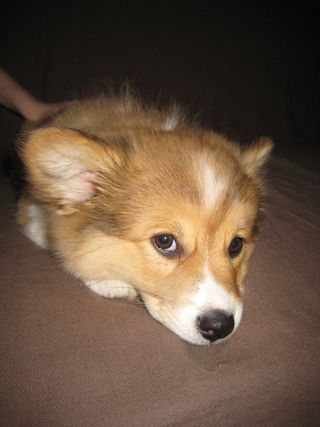 * The other two people in the house have yet to voice an opinion.**

** In all honesty, we probably won't do much of anything (if we do anything at all) until Saturday, because this week has been a crazy one, what with Tech rehearsals and Scout meetings and homework and personal hygene.

up with figs, room with escher views 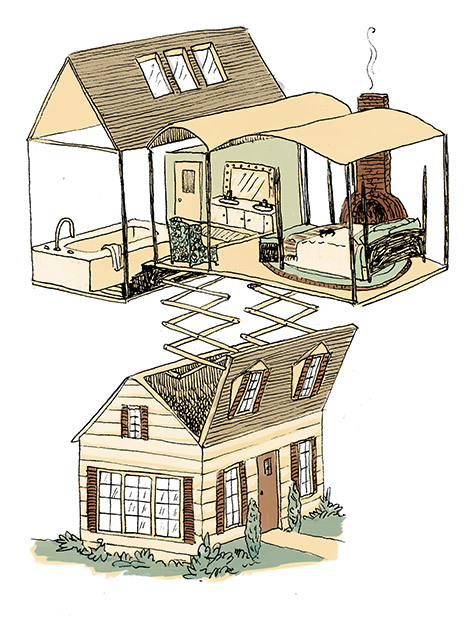 My standard recurring dream used to involve waking up in a new town in a new house with no idea why we’d moved there. Invariably, in the dream, the move would be my husband’s fault. Because he tired of his job or got a better offer or some such. I’d wake up incandescent with rage, furious at not being consulted on this life change.

My husband has learned to deal with this.

This dream has ended, mostly. But there’s a new one. In this one, I discover a room in our house that we didn’t know was there. Usually, it’s a master suite, complete with a sumptuous bath and skylight. Sometimes, there’s a pool. Or extra staircases. Or a ballroom.

Every time I discover the new space or spaces -- which must have TARDIS-like properties to fit in the existing house’s shell -- I wonder why we aren’t using it and make plans to move our stuff in. Then, I wake up, amused by how un-subtle my brain is.

* These dolls are powerful objects. And creepy. Let's not forget creepy.

* What happens when scientists play with mini figurines.

* Solve the outbreak. I am tempted to get an iPad just to play this game.

* On Celiac and gluten. And a rebuttal, sort of.

* Note to self: see if Sheri wants to knit for the mitten tree. (And if you know Sheri, please ask her.)

* A holiday we should all embrace.

My Dad has slowly been transferring the contents of his house to mine. Turnabout is fair play, mind. For years, I slowly transferred the contents of various dorm rooms to his house. I'm getting the better end of the deal. I gave him tatty Duran Duran posters and he's been passing along Items of Quality.

Like the latest batch o' things, which was a trash bag filled with sweaters.* Some of the sweaters are destined for the costume shop on campus, because I have a sneaking suspicion they could be of use. But a couple are staying here. 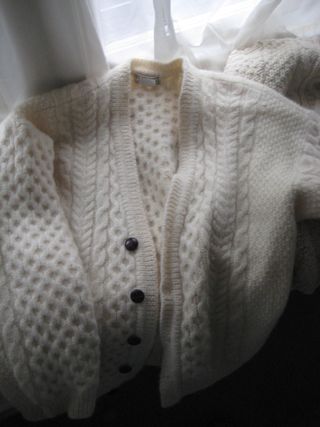 The cardigan on top is a heavy Aran from L.L. Bean. It comes down to my knees and I could fit both children and myself in it but I'll keep it around for the next blizzard. Because there will be a next blizzard.

I'm not sure what to do with the white sweater underneath, tho. It suits me not but the label intrigues me: 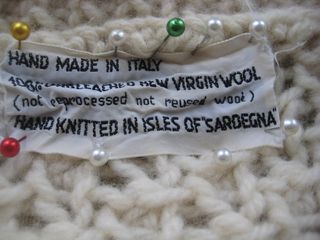 While my knee-jerk impulse is to felt it and make something else with the result, it feels wrong to do such violent things to something from the "Isles of 'Sardegna.'" Or is that just me?**

But the last sweater is the one that I will never, ever felt. Not ever. 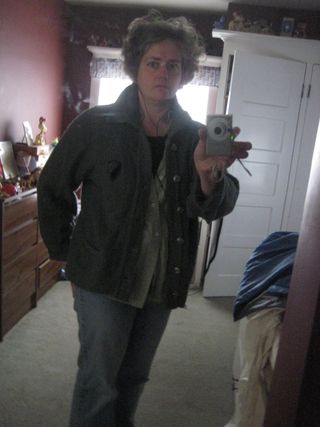 (Picture snapped in the Boy's mirror. Yes, my hair was having a day.) (I've included this picture only because my jawline looks fantastic! Carry on.)

This is the sweater that I always grabbed when I was chilly at my Dad's house, which was all of the time, because he prefers his house cool enough to store meat. I have loved this sweater for years and years. This love is the problem. The sweater has seen better days. It's still wearable but I have fears for its future. 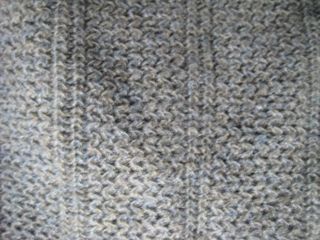 I'm pondering trying to replicate it somehow - but can't wrap my head around this stitch pattern. Anyone?

* I have no pictures of the bag itself. Because, really, you should be able to imagine this.

** I suspect I already know the answer to that.

“She looked like Sam Spade, if Sam Spade had been a girl and had a weekend gig fronting a ska band.”

Quickly then, because it looks like this day will be spent with me running around like a harried bumblebee.*

Tony at the Bonito Club is knitting some mittens for the tree, once it cools off in Melbourne, Australia. Australia, y'all! We're going international!

So have you started your pair yet?

* Is that a thing? It should be a thing.

up with figs, under his hat 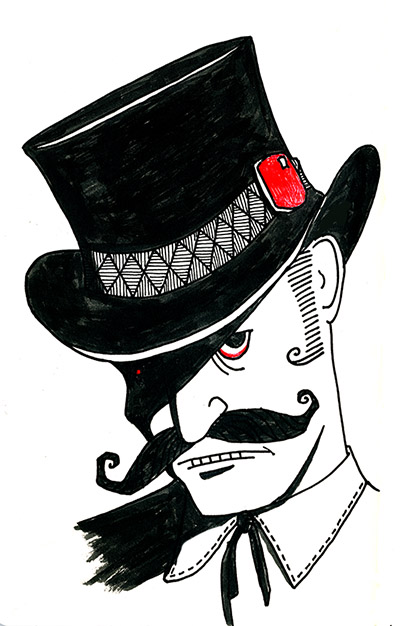 It was the hat that made him do it, that turned ordinary Martin Ignatz into a hipster bartender who made his own bitters and artisanal mustache wax. He’d been an accountant, Martin had, but then he found the hat on the sidewalk walking home from work one day. And, bang. No more numbers in columns. No more 9-to-5 with lunch in a paper sack, made from grocery store cold cuts and American cheese. Now, he brined pickles and onions for the bar and snacked on hand-rubbed peanuts from a hyper-organic farm in Northwestern Alabama.

The hat also whispered other things to him. Dangerous things. About charcuterie and hog slaughter. And other slaughters, too.

But, so far, Martin has been strong.

* Jonah Lehrer apologizes like Lance Armstrong does. Which is to say, not really at all.

* Keep your red stuff out of my head.

* Know any classroom teachers? Or any scientists? Send them here.

* My name is Adrienne and I am also a stationery addict.

on trying a new thing 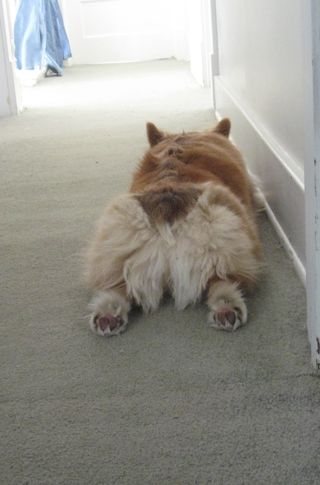 Lucy's keeping an eye on the Boy's door because today is President's Day, the kids don't have school, and the Boy is spending some time in his room until he can figure out how polite discourse works. Or until he puts pants on. Whichever comes first.

Over the weekend, I did something I've been meaning to do for quite some time. I bought a quarter of a cow.

See, while we don't live in the country, we are pretty darn close to it. There are a lot of farmers here, who I want to support because it is work that I couldn't do myself. I can barely keep houseplants alive, much less convince them to bear useful fruit. But there are many others around here who excel at such things and I'm happy to give them my money for food whose provenance I can identify.*

We've had a chest freezer in the basement for a few years, bought with the intention of filling it with meat. And, finally, we have. 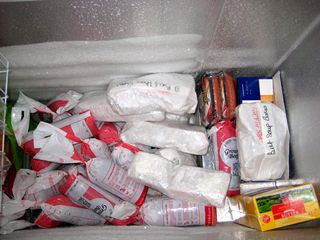 My only problem with grass fed, etc., meat is that it can be kinda tricky to cook because it comes from cows who have actually moved around during their lives and isn't buttery soft. But last night's brisket was a huge success. 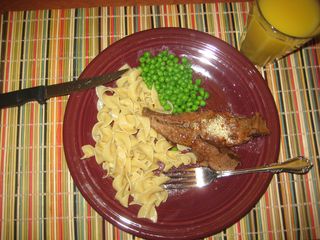 Seriously. You don't even know.

The recipe was from smitten kitchen's cookbook.**

But I'm wondering about the rest of the meat, because I suspect there will be some trial and error. And more error. And some trials. Anyone have any go-to recipes?***

* which isn't to say I'm all religious about, like, artisanal parsley. Just that I try to keep the source in mind most of the time.

** Tonight's dinner will be the gingerbread pancake and I'm making the broccoli salad later in the week.

***And does anyone want some beef liver? I wound up with more than I want to deal with, which is more than any. Perhaps the dog will be getting some extra fancy treats?

"Quite a few people in the state of Alabama, however, would not set foot in our room after the iguana moved in, including our mother. The iguana wandered implacably across my schoolbooks, and often across me, and at night he'd hang by his claws high on the silk curtains, thinking his special Paleolithic monster thoughts, backlit by the moon. It was an excellent primer on how to live with a dragon."

"If you don't understand history," his wife adds, "how can you understand human beings? This isn't just iron. It's engineering and technology. It's the bravery of the soldiers. It's the sheer foolishness of it all."

-- "The Shell Hunter" by Chris Dixon