"Everywhere I go I'm asked if I think the university stifles writers. My opinion is that they don't stifle enough of them. There's many a best-seller that could have been prevented by a good teacher."

-- Flannery O'Connor who was celebrated by The Writer's Almanac this week.

bow before my plastic bins

The yarn closet has been tamed. 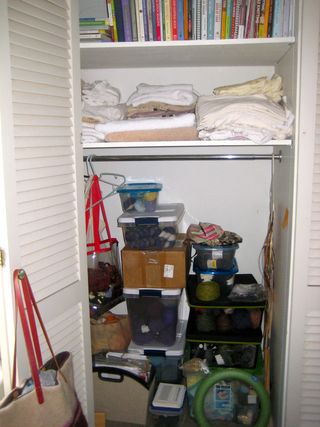 The yarn is in bins* - plus I had enough room to also bin up the spinning fiber and to shelve most of the pattern books. I also found another wee skein of green yarn, which you can see in the center bottom--ish part of the picture. It'll be mittens soon.

I was so thrilled by my progress on this closet that I tackled the one next to it. No big dramatic pictures but I did find two things I'd long thought were lost forever. 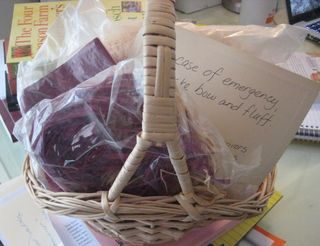 Back before the turn of the century, long before we had cell phones and flat screen TVs, I spent six months making gift baskets** at the brand new Central Market on Lamar. I know. I'm old.

When I left Austin, the women I worked with gave me a going away party and presented my with this emergency gift basket kit. Things have never gotten bad enough to use it. May they never do so.

Also -- I FOUND THE SNOW GIRAFFE, whose death I'd long feared. 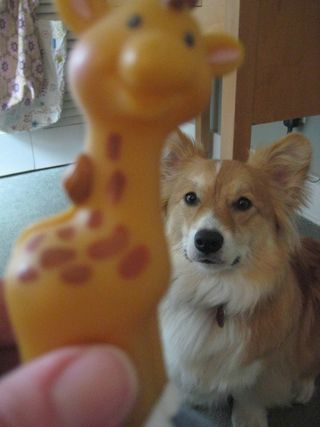 My sincerest wish is that I won't need to put the giraffe to its purpose before November. I am so over this winter.

*I wish I had the space (and kid/pet free house) to do this. Next life, maybe.

up with figs, perish 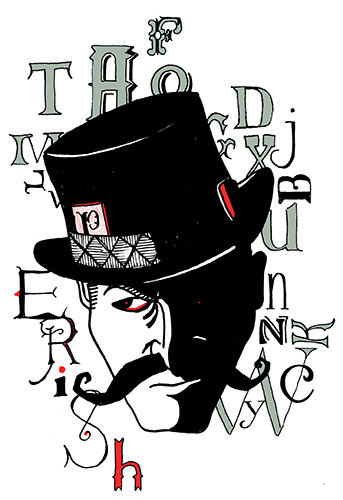 Martin Ignatz waxed his mustache, put on his hat, adjusted its angle to just the proper degree of rakishness, and went out into the late winter air for a stroll down to the local brewpub (where all of the offerings were brewed with indigenous hops and wheat) for a quick pint before the start of his shift.

Three feet from his front door, he found an old wooden piece of type, the sort that were common before the advent of hot lead. It was a T. Capital and serifed and about as big as his pinkie finger. A few steps later, an A. Then an O. He was a be-mustached mouse following a breadcrumb trail.

His pockets were full by the time he reached the pub. Ditto his hat, which he’d pulled off of his head to use as a basket.

All that was missing, he reckoned, was the lowercase p but his memory might be playing tricks on him. As memories can.

* We're going to Seattle this summer and might just have to make a side trip here.

* What it really looked like, because we tend to forget.

* Looks great. Wants to kill your children, tho.

* My love for this is mighty.

* I've mentioned that my birthday is coming up, yes?

The kids and the college students are on break this week. The Boy and the Diva's paternal grandmother has whisked them away to points south. I was scheduled to join them but had to make the adult decision that too much else needed to be done -- and would get done much faster while they were away.* It'll be a different ballgame once my semester ends but, for now, the papers and grades and sundry bookkeeping has to happen.

That doesn't mean that I don't have time to knit a bit:

My first pair of mittens are done. The yarn was a gift from the lovely Delia. It came from New Zealand and is soooooo soft but sturdy, in that way that good wool can be. The pattern came from the link in this post. And if you're asking yourself - why green mittens? Click here.

My other goal, apart from the job-required stuff, is to impose order on my secret shame: the yarn closet.** 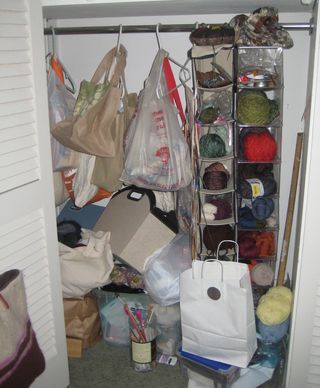 Wish me luck. The trick will be keeping the dog's schnozzle out of the yarn that I'll have to pull out, sort, and put back in. I'll let you know how it goes.

* The Featureless Saint decided to celebrate their absence by getting the stomach ick that's been making the rounds. I spent a goodly part of the weekend bleaching and Purelling because, ew.

** This is also the cross-stitch closet but doesn't contain the auxiliary fabric shelf. That's another project for another day.

qotd, it's an ethos

"Guildenstern: It could have been - it didn't have to be obscene! I was prepared. But it's this, is it? No enigma, no dignity, nothing classical, poetic - only this, a comic pornographer and a rabble of prostitutes!
The Player: You should have caught us in better times. We were purists then. "

-- Rosencrantz and Guildenstern are Dead, Tom Stoppard, which I am making my playwriting students experience.

up with figs, scooter 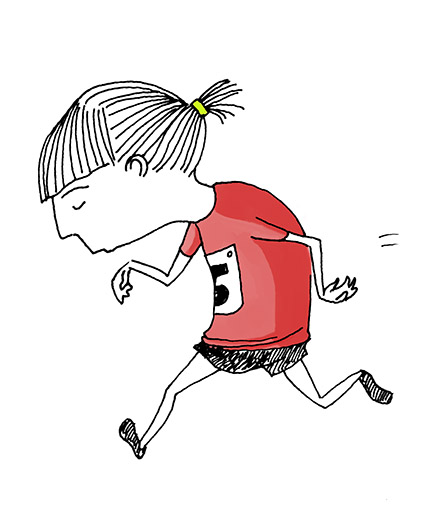 I keep reminding myself that it is not how far or how fast I run but the fact that I run at all. That ought to be enough.

But in my mind, I dream of being Kenyan. After five gazelle-graceful miles I’ve only broken a sweat. At ten, which I stride through with soft footfalls, my feet making less noise than a leaf on the wind, I’m finding my groove and could go for 20 miles more.

But I am not a Kenyan. I am an overweight 40-year old whose ragged breathing and thudding strides alert all to my passing. I do not glide. Those who’ve seen me after a run fear for my well-being. I’m doing my best to make peace with my non-Kenyan-ness, even though it also makes me mad.

But I run, regardless.

* It tickles me to no end that my local brewery is paired with Westeros.

* I don't drink soda - it's not a health thing (even thought they are lousy for you) just an aversion to beverages with bubbles - but only make an exception for Jarritos Tamarindo. I just open it and wait for it to get flat. I know.

* I didn't watch The Taste beyond the first episode but enjoyed this piece by Bourdain anyway. And really want to meet Nigella.

* Children and their toys.

* This matches my experience at a Knoxville cat show. But, you know, in Spain. With Spanish cats.

* A Day in the Life of Oneonta. Cute - but who is this Connor kid?

* My birthday is just around the corner, you know.

it grades the papers

We have entered that magical part of the semester, the one where it feels like I spend every waking moment grading student papers. This is what most of my weekend looked like: 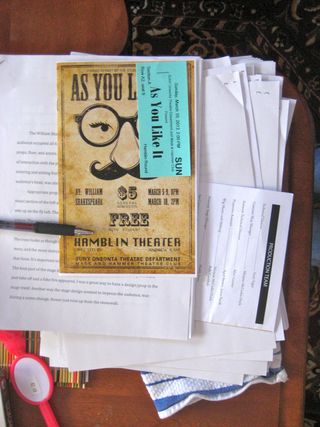 All that is missing from this picture is the box of tissues that was on the other side of the table, since both the Boy and I have a case of the late winter sniffles. The Diva had them earlier in the week but seems to have rallied. As has the Boy, who bounced off to school today. Me? Not so much.

"We're an old-time string band, which has this drive to it, and it's often just one part all the way through, with some shouting in the middle, so it kind of sounds like the Sex Pistols."