* I'm not so much proud that I got all of the questions right as I am sad that so many don't.

* As a former reporter and a former Knoxvillian, this story fills me with unseemly glee. And Cari Wade Gervin is doing a great job with it.

* What writers make (and the irony that this is published on a largely non-paying site is not lost on me.)

* I really, really try to not judge other parents too harshly -- but I really want to punch this woman in the neck. Politely. With as little judging as possible. Especially in light of this.

*  How quickly would the kids destroy this? Still, I kinda want one.

* Pockets. It's really all we ask for.

shameless self-promotion, 378 in a series + into the woods

The shameless promo: from the local almost daily: confirmation that it's not just me.

This is the weekend when everything seemed to happen simultaneously. I ran a 5K*. Clara yarn showed up**. But the biggest excitement was the weather, since this was the first weekend that actually felt like Spring.

The Diva got lucky with the weather, because this was also the weekend of a long anticipated Girl Scout camp. A fine time was had and she can't wait to do it again, despite the expression on her face in this post-camp picture. 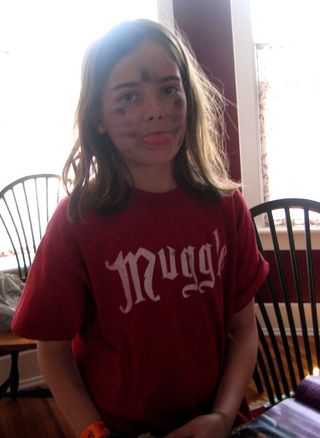 Around here, we don't like to waste good weather -- it is as precious to us as clean sheets and as rare as tidy children -- so the Boy, the Dog and I went for a walk at a nearby Audubon bird sanctuary. 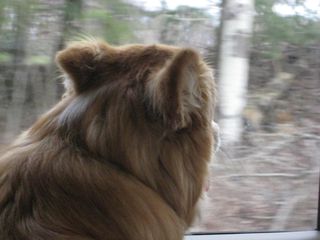 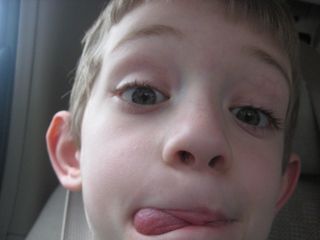 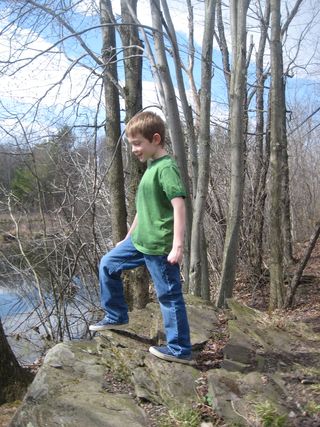 He claims this rock for all of Boy-kind. 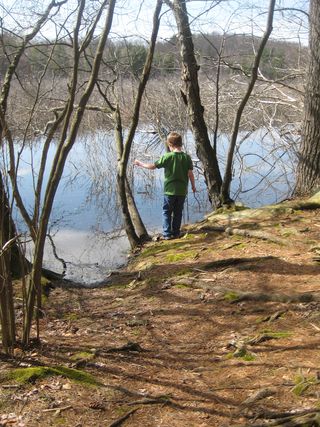 The woods have only just started to green up. And the Canada geese spent a very long time letting us know that we were near their turf and that we should feel free to just bugger right off. 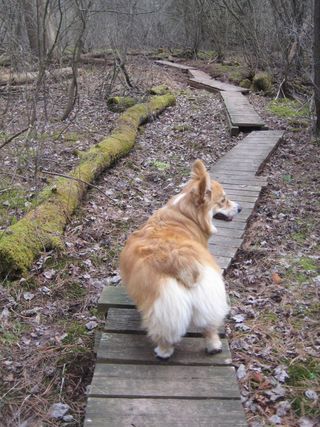 My view for most of the hike. When we got home, Lucy was so wiped out that she fell asleep on an ottoman, slipped off of said ottoman, and didn't even readjust herself after she landed in a heap on the floor.

* More later in the week when I can find the results and/or pictures online.

** More later in the week when I have a minute to think about it.

*** No, I don't know why my kids have such a problem with keeping their tongues in their faces.

-- Bill Bryson, In a Sunburned Country, which I've read but am currently listening to as an audiobook.

When I went to pick up yesterday's mail, these were waiting for me: 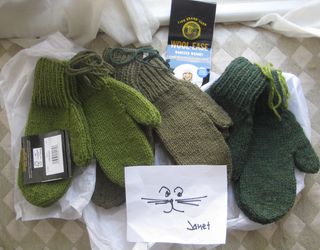 Six (!) pairs of mittens from Janet* in Arizona. Now we know the answer to the question, "how many mittens will one skein of Lion Brand Wool Ease make?" The answer is: four, for a total of 12 mittens in all, in Avocado, Loden, and Forest Green Heather.

Thanks Janet! They are in the bin.

(If you are wondering what all this is about, then, click here.)

Since I had the camera out, I decided to capture an image of Barney,** our quasi-feral former barn cat. Now that the weather has grown marginally less dire, he'd much prefer to be outside but was inside, for reasons known only to him. 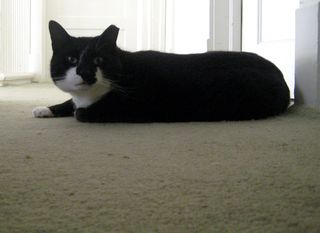 Right after I snapped the picture, he sauntered over and bit the top of my head. Jerkface. 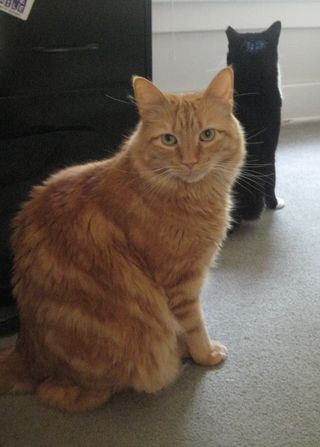 Then he sat in front of his window and waited for the person who he'd just bitten to come open it. Which I did, because I am a sucker.

Note McGregor's disdain. Not sure if it's for me or for Barney.

** a.k.a. Barnstable, the Barnacle, Asshat. Depends on everyone's mood, really. And, yes, he is missing the tip of his ear. Pirates were involved.

up with figs, the key 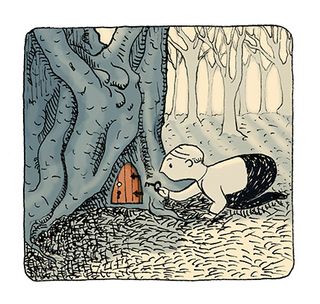 The problem, Norbert now realized, wasn’t finding the key. He’d always had it, tucked away in his gran’s potting shed, back behind the pile of peat moss. The key had long been his and he knew it.

No, Norbert thought, it isn’t about the key. It’s about maintaining one’s enthusiasm for trying your key in all of these darn doors in the hopes that one day your key will work.

* "Adoption is the new pregnant." (Warning: You will probably weep after reading this. Or be filled with rage. Or both.)

* Turns out that women write literature, too. Who knew?

* Dang, Daniel. I have some pollen in my eye. That's all.

* Peter Dinklage answers 20 Questions, one of which involves an artichoke. (This is on the Playboy site so while the interview is safe-for-work, the site itself may not be.) (Also: Tyrion's best lines. Not at all safe for work.)

* This is probably only amusing if you've seen Call the Midwife.

* We ought to be less afraid of singular nuts with weapons and more afraid of what's likely to harm us.  Plus, we actually have some pretty good ideas for how to help prevent the latter.

before they get here

Quick post, because a) we are in the last three weeks of the semester and my brain is soft and b) my afternoon will also contain my annual squishing of my boobs, which takes up some time.

It doesn't take time because there is a lot of boob. Really, the time is taken by the waiting, not the squishing. Um.

I had the privilige to co-exist in the same city as Yee-Haw Industries, which has now become but a memory. But one of the Yee-Haw partners has moved to L.A. and kickstarted a new business, Church of Type. Here is my reward for shoving a few bucks his way: 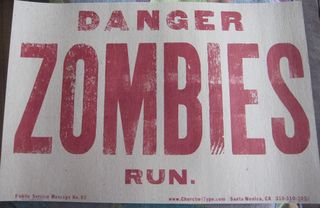 Now I just need to figure out where to put it.

"As for Vic -- her story shows that even the greatest athletes are still human. There are no perfect runners, and although you can improve, sometimes greatly, you can never train yourself out of your own body and mind."

Last Christmas, my gift to myself was a share in Clara's Great White Bale. Today, I got a taste of what's to come. 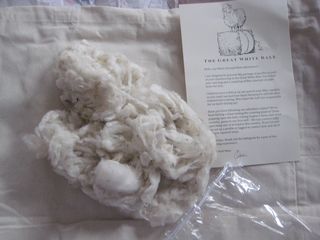 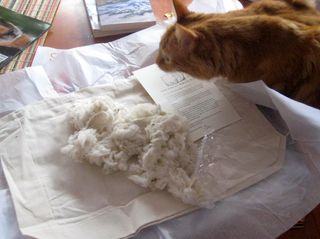 This is why I can't have nice things, McGregor. 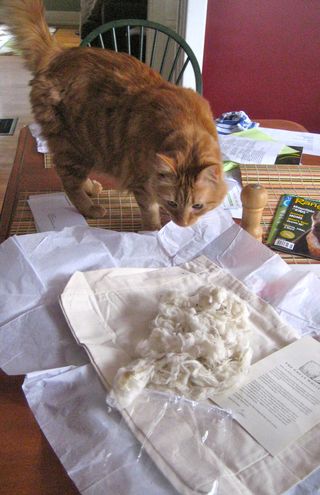 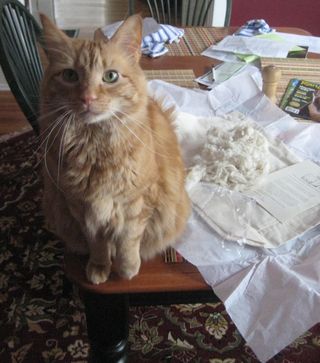 I'll move it off of your table in a minute, cat. Sheesh.

Today, there will be no up with figs.** Lisa and I were both too heartsick to bring the funny earlier this week. We'll do our best to be back on form (such as it is) next week.

In the meantime, two bonus many things and a brief story --

* Want to do tangible good? Put books in kids' hands.

The Boy has been learning about presidents for the last few weeks. He now gauges all units of history by who was president, which frequently makes us scramble to wikipedia to find the right answer because neither Scott nor I can barely remember who is president now, much less who was president during the Teapot Dome scandal.

Anyway, the kids and I were driving home and a song*** that was big when I was in high school was on the radio. The Boy mentioned that he liked it. I said I did, too, back in the day. Was Nixon president then? he asked. Sigh, I said. How old do you think I am?

Enjoy the rest of your Wednesday.

** But you may have missed a previous installment...