the balls of mother's day

Yesterday, I woke to the delightful odor of cinnamon rolls and bacon. My Mother's Day only improved from there.

To be honest, since becoming a mother, I can't remember having a truly awful Mother's Day. And now that my children appreciate the wonderfulness of sleep and I've figured out what I really, really want*, my expectations and my reality now align.

The family outdid itself yesterday, though. 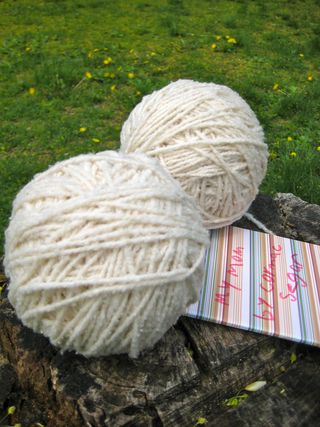 After a good, long run, I had free time enough to wind two giant yarn balls from Great White Bale Lot 1** and cast on for a project from it.**** While casting on, I also watched The Great British Sewing Bee, which pushed every single one of my TV buttons. The Husband mocked, as I suspected he would, but I pre-emptively forgave him because of my comments about the Golf Channel. Because, really? A Golf Channel?

Delight number two was the book the Boy made. Here's an interior page: 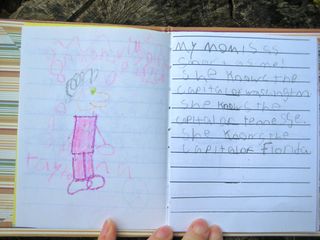 Apparently, his class is learning about metaphors and similes. In the Boy's eyes, I'm as "curious as Curious George, as cool as J.J.*****, and as creative as Vincent Van Gogh." Which is so sweet I can't even tell you. And then there's this: 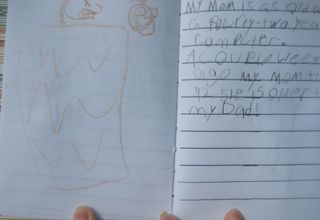 "My mom is as old as a fourty-two year old computer. A couple of weeks ago, my mom turned 42. She is older than my Dad!"

You should really look hard at the picture, too, to get the full effect. That kid.

The husband made dinner, too, and the Girl straightened her room. It was a good day. And, yes, I know how lucky I am.

* All I want is a clean car, one where all of the kid crap is out of the backseat and the dog slobber is wiped off of the windows. I am a simple creature.

** Rather than bust out the swift and winder, I wanted the pleasure of doing the balling by hand. And, oh, it was a delight.***

Yay! Last year I asked to have the car detailed for my gift, too. Nothing better!

It might interest you to know,
speaking of the plentiful imagery of the world,
that I am ...

as amazing as a countryside,
as peaceful as a monk,
as neat as a grownup, and
as superior as a super hero.

Aren't computers measured in something akin to dog years? I have a 22 year old computer and it is so decrepit and small of brain it can't even get on the internet. ;)