up with figs, butterfly tied 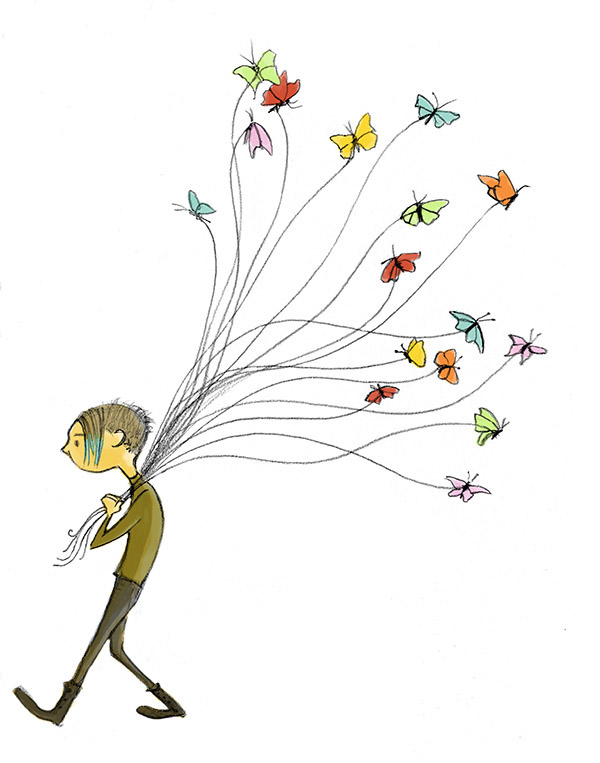 Ideas are like leashed butterflies, she said. And I could see what she meant.

But I still felt bad about keeping them tethered, by my inarticulateness, my laziness, my faults. I can only see the ones that I didn’t pay enough attention to. Those are the ones I drag around behind me, dun-colored and ragged.

Focus instead on the ones still vibrant and flying, she said. Figure out how to let those fly free.

Now, she said, didn’t you say something about pie?

* Halfway around the Carousel of Progress.

* Whenever you start to feel nostalgic about The Good Old Days, read this. Or this.

* When I grow up, I want to write like Stephanie Piper. She nails it every time, mind, but hit this one over the fence.

* Breaks your heart in all of the best ways.

* Where are the newsworthy cocks? (NSFW. Really.)

* Found myself in a click-trance-memory-hole thing when I read this review of Jomama Jones' Austin show. The writer's name was so familiar that I started clicking through his other stuff, like this lexicon of stagespeak, which should be part of the stagecraft classes. Then the dominoes fell and I remembered Enfants Perdu, a show Frontera@Hyde Park did and that I stage managed (and wrote about.) And then I really wanted to make some big, cheap theater.

Got back yesterday from Readercon, which was a good and lovely as always. Today, however, has been spent running around doing all of the things I didn't do while away. Unless you want to hear a blow-by-blow description of my trip to the grocery store* and/or this morning's hot (and more hot (and humid)) long run**, I've got nothing of interest right now.

Except for this: I was on a few panels this year. Scott Edelman recorded one. He also captured one of my favorite writers reading on of her best stories. So if you need something to look at and listen to because you are out of new episodes of The Supersizers Go***, those two clips would be options.

** Actually, that describes it pretty well.

"The world has always been evil. Grownups think the world becomes evil because they mistake their growing wisdom for a change in the land itself."

-- Chris Willrich, The Scroll of Years.

I can get a little nutty* in the summer and start all of the projects I've been planning all at the same time. Like, say, that curtain for the front door, which had spent the last five years covered with a ratty polyblend faux-lace monstrosity. 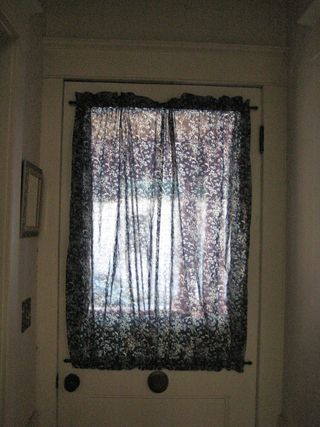 If I were a better photographer, you would see the detail in this blue and white cotton voile print. As it stands, trust me when I say, it's lovely.**

I've also started a biology experiment on the kitchen counter.*** 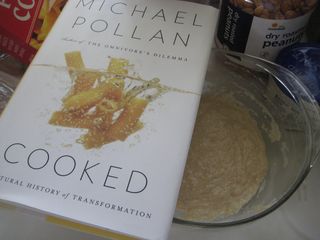 My goal is to make Pollan's bread recipe, the one where he harvest wild yeasts. This is how the starter looked on Day One.

And on Day Two: 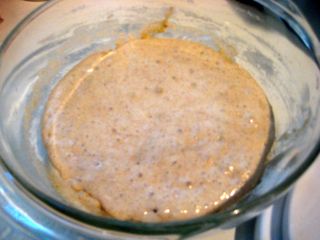 It bubbles! It smells vaguely of beer! Critters are definitely growing in there. Only time will tell. You are on the edge of your seat, aren't you?

* I heard the smart ass who just muttered "a little." No bread for you.

** The husband is dubious but willing to give it a chance.

*** Although, really, isn't all cooking and eating a biology experiment?

up with figs, wren will it end 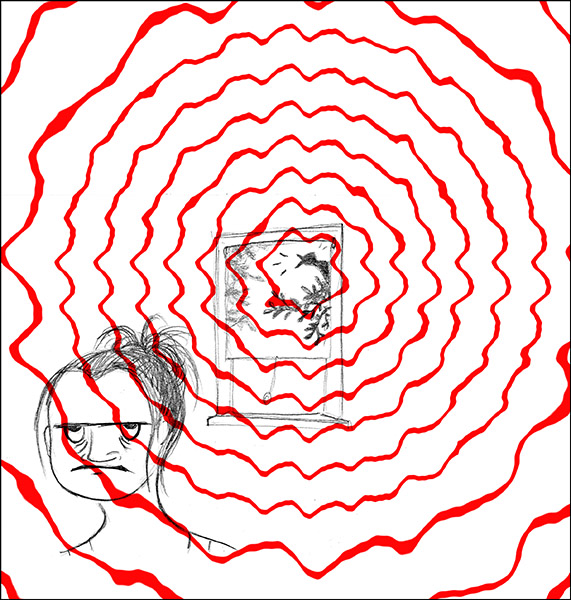 Billy Collins has a great poem called “Another Reason Why I Don’t Keep a Gun in the House.” It never mentions guns, mind, but does go on about his neighbor’s barking dog and how it is interfering with Collins’ ability to work. The reader is left to make the connection between the title and the situation. It’s a clever piece of work. You should look it up.

For now, however, let me say this: there is a squawking bird just outside my window. I can’t see him (or her - who the heck can tell with birds?) but it sounds like he is the bellows of a bagpipe being squeezed in summer’s armpit.

No, I don’t keep a gun in the house either. I’m starting to reconsider it.

* One letter makes a big difference.

* I can't really describe this. Just go read it.

* On the wonder that is Jomama.

* Two from the NYT: Your children aren't the exception and The joy of old age.

* The more you know.

* This is kinda genius.

In addition to all of the July 4th fun around here, I spent the morning building a catapult. As one does. The initial firing did not go as planned, sadly, when the arm snapped off because I tensioned it too tightly. 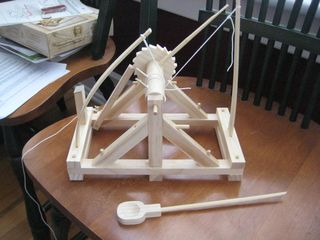 But we will rebuild! Better! Faster! And Stronger!

In other news, I'll be at Readercon  this coming weekend. Should any of y'all also be there, here's my schedule for your stalking convenience.*

8:00 PM    G    The News and the Abstract Truth. Robert Killheffer, Adrienne Martini, James Morrow, David G. Shaw (leader), Gayle Surrette. The controversies surrounding Mike Daisey's The Agony and the Ecstasy of Steve Jobs and John D'Agata and Jim Fingal's The Lifespan of a Fact arose when art and truth collided. While fiction can play fast and loose with facts in order to tell a compelling story, monologues and essays are held to a higher standard. The authors of these books were surprised by audience reactions to the discovery that their "factual" accounts were fabrications; they claimed that their work was more "beautiful" or "lyrical" than the truth. But which are more important: true words, or beautiful words? Why do some writers think it necessary to take liberties with the truth in order to create great "nonfiction"?

11:00 AM    ME    The Fannish Inquisition. E.C. Ambrose, F. Brett Cox, Jim Freund (moderator), Adrienne Martini. Many writers have had the experience of being asked, at a panel or at a signing, to elucidate some minor plot point of a barely-remembered story or novel written years earlier. Many panel moderators have dealt with audience members who see the question period as an opportunity to deliver their own elaborate theories or critiques. From the point of view of the author or moderator, how should such lapses of politesse be most tactfully handled? Which questions do you wish someone would ask? From the point of view of fans, how can you be sure you're asking meaningful questions that might interest other audience members besides yourself?
3:00 PM    ME    Knit One, Print Two: Handicrafts, Replicators, and the Future of Making. E.C. Ambrose, Natalie Luhrs, Adrienne Martini (leader), Eric Schaller, David G. Shaw. Take your average 21st-century American knitter on board the Enterprise and the first thing they'd do is replicate a heap of yarn and some needles, or roving and a wheel to spin it with. The replicator might obviate the need for real plants and animals as sources for raw materials, but not the desire of people to create beauty out of those raw materials, or just to do something with their hands on long trips. Given this, why do we almost never see handicrafts in SF futures with replicators? What can futurists learn from the recent simultaneous booms of 3D printers (which are arguably proto-replicators) and handicrafts, both under the header of "making" and often employed and enjoyed by the same people?
Saturday July 13
11:00 AM    F    A Visit from the "Suck Fairy": Enjoying Problematic Works. John Benson, Cathy Butler, Barbara Krasnoff (leader), Yoon Ha Lee, Adrienne Martini, Kate Nepveu. Encountering problematic elements within fictional works isn't uncommon. As readers develop awareness of racism, sexism, homophobia, and ableism—development that occurs on both a personal and a cultural level—they may be appalled to stumble across bigotry in childhood favorites or long-lauded classics, or struggle to appreciate a book that everyone around them is enjoying. Can you still love a work after you've seen something horrible within it, or does continuing to enjoy it mean tacitly approving of not only that specific work but problematic works in general? How can we make room for complex reactions in conversations among critics and readers?

* I'm also putting it here so that I can find it quickly - and make sure that I wind up where I need to be. Also, if anyone has any comments/ideas about any of these panels, please share. I'll do my best to work them in.

-- Mary Robinette Kowal sets the record straight. And, yes, I know the 12 (or however many) rabid weasles in the genre are simply crying out because their assumed privilege is dying and it hurts them but, really? Enough already.

up with figs, bored 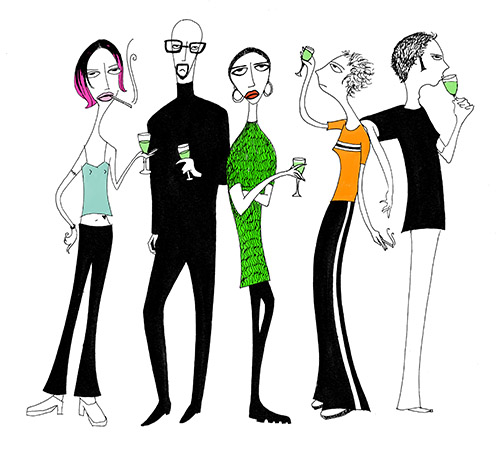 It has been said that only boring people are bored. The 86th street Absinthe Drinkers Club (formerly the Mustache Appreciators’ Club (and formerly Picklers’ Club)) would mock that sentiment if mocking didn’t require active engagement.

(Truth be told, they aren’t really a “club,” since that word is so 1953. They are a “loosely allied group of enthusiasts who don’t follow trends but seek what is most cool right now.” That, however, was too long to fit on a t-shirt. Not that they would be louche enough to wear a t-shirt but it is good to keep one’s options open, just in case an artisanal t-shirt shop should bubble up from the underground.)

Instead, they will drink at you with unveiled disdain, which looks a lot like boredom to those who are too unhip to see the difference.