qotd, works best when you have bags of money

"That's not worth worrying about. If pressed, I'll use the never-fail universal apology."

"'I was badly misinformed, I deeply regret the error, go fuck yourself with this bag of money.' But it shouldn't come to that..."

-- from The Republic of Thieves by Scott Lynch. So good.

a day in the life

College classes started yesterday, which means I'm back to the day job, which is teaching a couple of said college classes, which shouldn't effect you, dear reader, at all. But it might - because my kids will be going back next week and there will be a good 10 days or so of utter bedlam. More than usual, that is.

I don't know what that means, either. I was just stuck for a segue and really like this glass art that we saw in Tacoma.

Speaking of glass and days of tumult, there was another installation that I was drawn to. 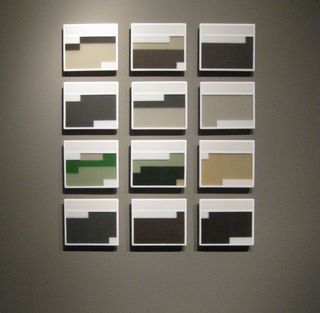 At first, it was the colors that caught me and how much these rectangles look like calendar grids.

Because, as it turns out, they are. 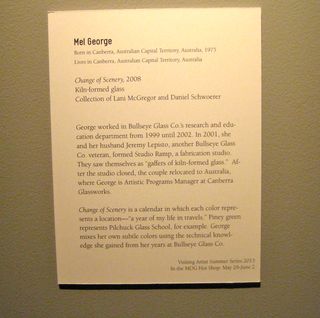 What struck me after reading this is how fiber artists do this as well. I can think of at least two patterns that translate days into colors. Can I find links to those patterns now? No. No, I can not.

But your collective memory is much better than mine. Can you think of any fiber artists who use their work to abstractly document their days?

ETA: Found one of the ones I was thinking of. Still tempted by it.

up with figs, long way down 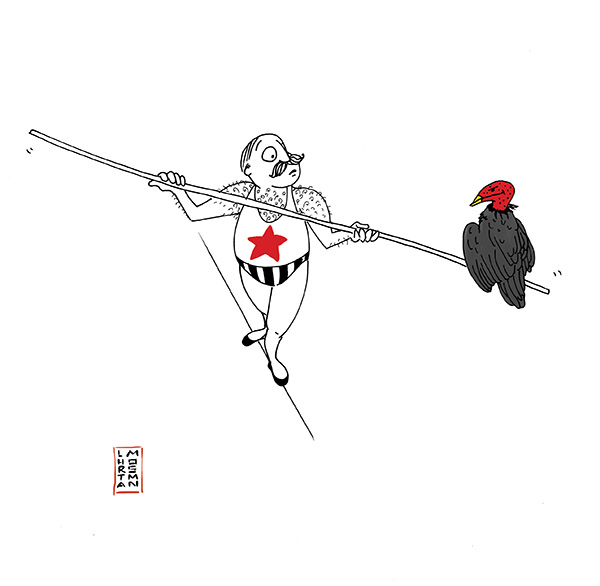 On his best days, Nicoulos was convinced that the worst part of the gig was squeezing into the costume.

The height was no problem. His balance was excellent, honed by years and years of practice. His Dad - the Papa Nicoulos from the song those longhairs had a hit with in the early ‘60s - used to make his son walk the wire while being pelted with little tiny stones. After 20 years, young Nicoulos could walk across any wire, no matter how heigh or how long.

But the Spandex was always a drag, especially on the extra sweaty nights, which was most nights on the Citrus Circus Circuit.

They say it can always get worse, though. One afternoon in the badlands, it did.

* The Kevin Fitzgerald segment of this show makes me laugh every dang time.

* My kids and I watched the heck out of the Steve Martin Muppet Show episode. I need to remember to show them this.

* And you thought you worked hard.

* Some advice for new grads from Lewis Black. (The last piece of wisdom is what I tell my students, too.)

* This might only be funny to a certain subset of my blog readers but I laughed, especially about the Ohio bit.

* Number nine is the one that scares most of us the most.

shameless self-promotion, 383 in a series

From the local almost daily: It's all just material.

Also -- it's time once again for the big splash of self-promotion! Please buy some fine Martini merch if you are so inclined. Like, say, an ebook full of five years worth of parenting columns! In Kindle format or all other formats! Or Sweater Quest! Or Hillbilly Gothic!

Thank you for your support.

"Prepare the child for the path, not the path for the child."

1) My Blumchen has found a new home: 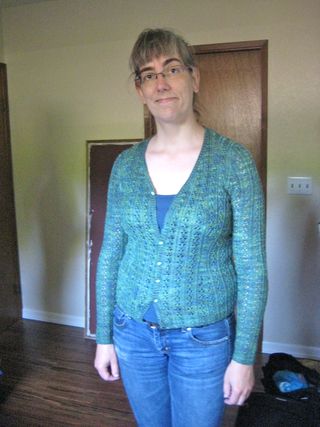 Scott's sister was happy to give it a home, even though my sub-par button sewing left them littered all over her house.

2) I made a little something with the second batch of Clara Yarn: 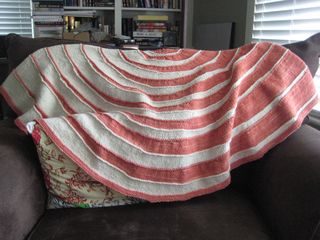 Merging Ripple Shawl. In hindsight, I wish I'd gone up a needle size. Ah, well.

3) Our elderly cat Trout, whose decline I've been chronicling, decided to stop grooming, which is a problem for a very long haired cat. He'd become a matted mess, one who was clearly itchy under all of the fur. And, so, steps were taken. 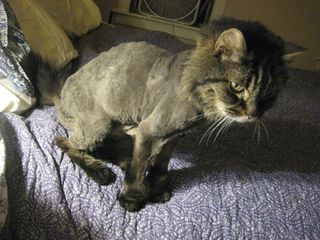 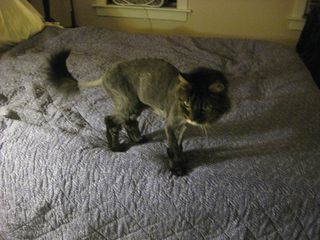 It's like he's wearing little kitty UGG boots on his front paws. We will say nothing about the tail. 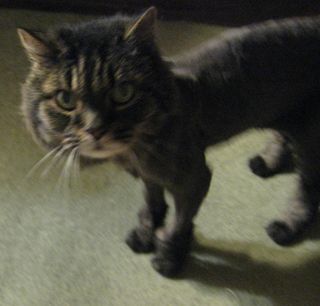 The upside is that we were able to get an x-ray while he was sedated and know what the cause of the problem most likely is, which is, essentially, spinal degeneration. We're not sure what to do about it yet, however, but are leaning toward drugs for the pain and not further traumatizing the Trout, because even just taking him to the vet taxes his nervous system. Like the Stones said, what a drag it is getting old.

up with figs, intervention 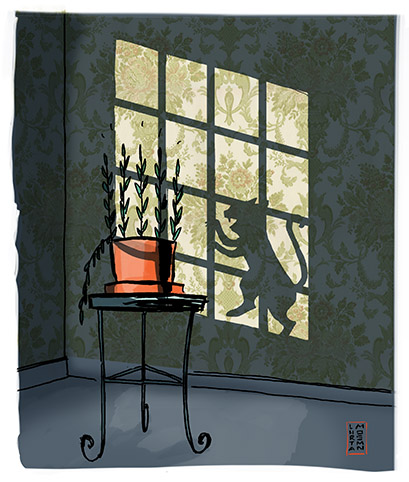 Consider this a cry for help.

My house has become where plants go to die. Actually, that’s not really true. It makes it sound like the plants were ready to shuffle off of this mortal coil. No, my house is where perfectly healthy plants are brutally snuffed out of existence. I can’t remember to water them or put them in appropriately sized pots. I have zero ability to gauge what kind of light any window gets.

But I’m not the only murderer. All three cats are serial killers, gleefully ripping the poor plants out, then sprinting around the house with them, trailed by shredded leaves.

Yet I can’t resist trying to keep a plant or two alive. Which is a sign of something.

* Yet another reason to not sleep well tonight.

* The Post-Partum Mother's Bill of Rights.

* More about the man behind Forgotten Bookmarks.

* Science fiction is for men.

* I have yet to read anything that describes Neil Gaiman in less than flattering terms - probably because he is really like this.

* I often find myself Dreaming of Shetland.

* The Business of Death. (Warning: graphic.)

A couple of packages were waiting for me when I got back from Seattle.* Two of them, were full of mittens. And, O!, what mittens.** 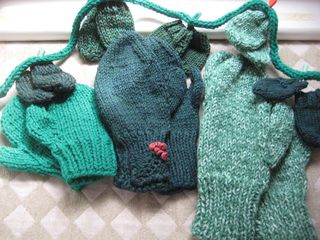 Mittens for the whole family from Dr. Karen Purdy, who I've had the pleasure of bumping into at two Southern Festivals of Books. The momma-sized pair has a wee ickle pocket on them. Right? 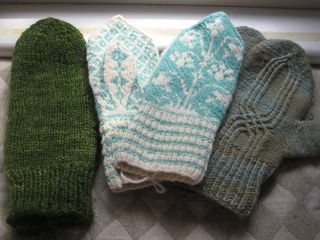 Three pairs from Alice in Manchester, CT. I want you to take a good look at the middle pair. Here's a close up. 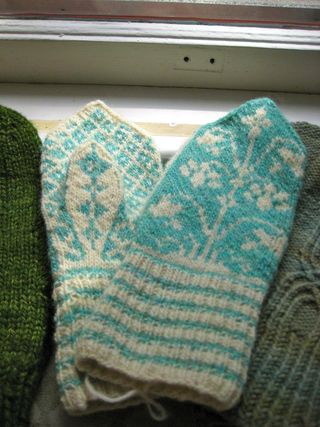 Fair. Freaking. Isle. For a pair of charity mittens. I am in awe.

These will go on the shelf, which I really should sort through soonish so that I know how far we have to go. You guys are awesome! Keep spreading the word and knitting the mittens!

* One of them was full of dried cow parts, which made a certain corgi very happy and some humans very queasy.