I've been diligently knitting away on my Chimera sweater. The back is done and blocked: 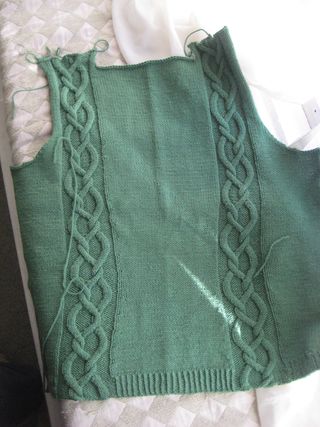 (Yes, there is a cable error on the back. I'm going to fix it in post-production.)

Also done but not blocked is one sleeve. The other sleeve is about halfway knitted. Also done and blocked are the fronts. Except: While pinning the fronts out for blocking, I noticed that they were identical, rather than mirror images. Which means that I have knitted to right fronts because I fail at directions. And given that the Tween was with me as I was pinning them out, I couldn't swear for hours on end about it; not because she can't handle swearing but because I'm trying to model pragmatic behavior in the face of adversity. Or something.

At some point this week I'll be ripping out one of those fronts and trying again. Whee.

The corgi would like you to know that it is snowing here, which is her favorite precipitation, even though this picture doesn't really convey that: 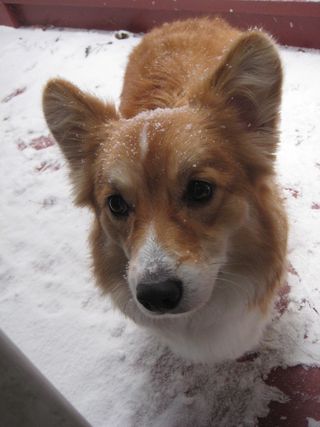 I've just decided to rip out the whole thing and start again. As it turns out, the cable isn't right and the shaping is on the wrong side.

This is a much more mature response than my first implies, which was to set it on fire.

yeah. don't set it on fire. You'll need the yarn!

That second front is a tragedy almost as bad as running out of peppermint chip ice cream at 1am. At least you can rip and reknit. The no-ice-cream thing is unfixable.