shameless self-promotion, 394 in a series 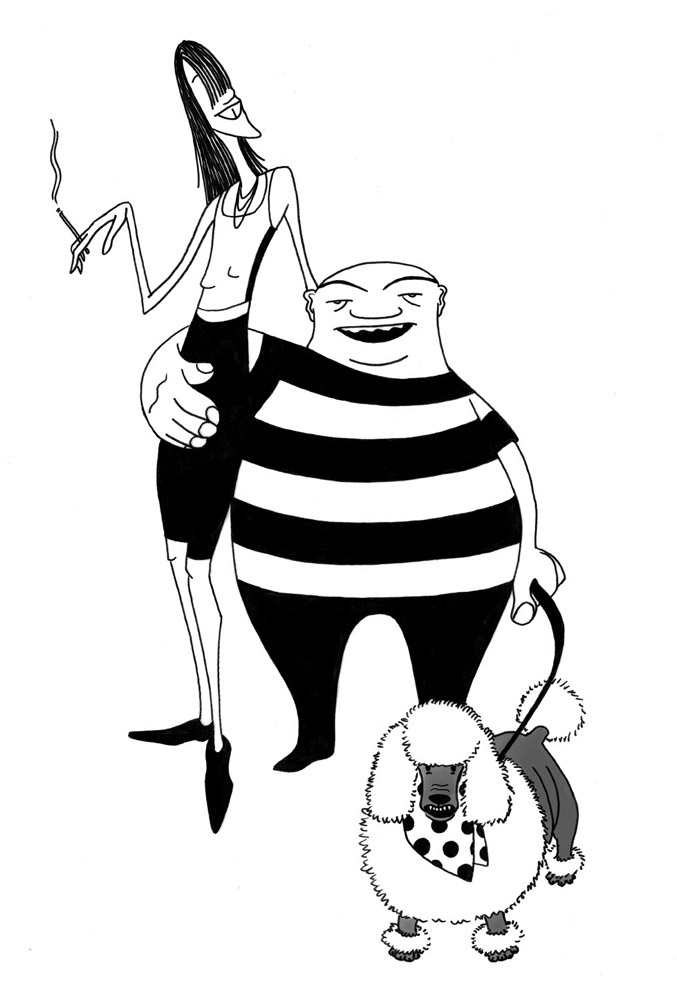 They called him Pierre The Piddler, Stainer of Carpets.

But in the deepest recesses of his doggy heart, he longer for something more dignified, like Thor or, even, Fluffy.

“But here we are,” P the P sighed. “One incident is all these people needed. And don’t even get me started on the fur pom-pons and polka dots. Do I comment on their accidents? No. No, I do not. Because I have standards.”

Then he lay down, covered his snout with his dainty paws, and dreamed of bunny-filled meadows and peanut butter trees.

* Don't even know what to say about this.

* I just happen to have a waffle maker and an intense curiosity.

* On low-tech games: Article 1. Article 2. (And I want to play a bunch of those, fyi. Except for Pandemic, which I just can't love, for reasons I can't quite pin down.)

* I suffer from Tsundoku.

Computer mice don't last long in this house. Not because the humans are especially hard on them but because Lucy likes to snatch them up and chomp them.

This wouldn't be a problem, mind, if the kids' computer, which is my very, very old Mac, could be operated without a mouse. It can't anymore because the touchpad packed it in at least three years ago.

It also woudn't be a problem if the kids used it someplace other than my office floor and/or could remember to put the mouse up on my desk when they were done with it. Lucy isn't a tall dog, nor is she a great jumper. The mouse would be safe.

And, yet. The last week saw me at Office Max buying yet another computer mouse.* I had something of an epiphany in the computer accessory aisle, when I snatched up the cheapest mouse and realized why it was so cheap. It still had a cord. A cord! Why did I not think of this earlier? 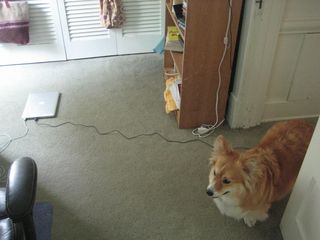 Lucy, of course, still tries to steal it.** But she can't get far -- and won't chomp on it if she can't take it to the dining room downstairs. Genius. I just wish I'd thought of it four mice ago.

*Yes, I did think about letting them both experience the natural consequences of forgetting to pick the mouse up. The Tween, however, needs a computer for her math homework and I am sure as heck not letting her use mine.

** In that picture, it's under her belly, which is where she'd dragged it before running out of cord.

in honor of the day

I am not a lover of poetry in general, but the poets I love, I love deeply.

“And then Jack chopped down what was the world's last beanstalk, adding murder and ecological terrorism to the theft, enticement, and trespass charges already mentioned, and all the giant's children didn't have a daddy anymore. But he got away with it and lived happily ever after, without so much as a guilty twinge about what he had done...which proves that you can be excused for just about anything if you are a hero, because no one asks inconvenient questions.”

Also: Here's my another mother runner recap for the Pgh Half Marathon. And, spoiler alert, I'll still be blogging over there on a regular basis. Woo! (Also, also: anyone local want to carpool to next year's Pgh Half?)

Sorry about the silence yesterday. The transition from badass mother runner back to working mom (who is in the middle of finals) has been hectic. At best. Until we reach stability* again, have a corgi, who is wearing a bandanna I picked up for her at the Pittsburgh Marathon Expo. 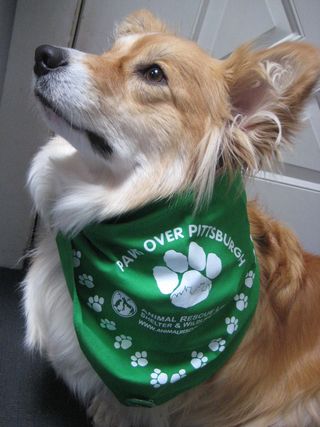 ARL Paws Over Pittsburgh does some good work, by the way. And the volunteers really don't mind someone talking their ears off about the wonder of corgis. Ask me how I know....

* (stable for this house, anyway)

Right. Home again and struggling to get Back On Top of Things. Until then, some other things. Many of them.

* Letter of the week.

* On the bubble. Also - why Pennsylvanians talk so strangely.

* You're doing it right.

runner of steel (in her jammies)

Before I hit the long road home, this is what a mother runner of steel looks like at the end of a long, good day. 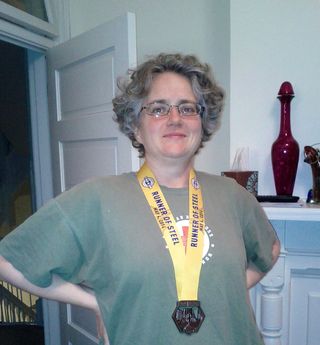 I may wear my medal everywhere for the next week. You have been warned.

"If you are losing faith in human nature, go out and watch a marathon.”
― Kathrine Switzer, 26.2: Marathon Stories

And this week's Martini Friday is live at another mother runner. Cider is involved.