On Friday evening (and into Saturday morning) our house was full of tween girls celebrating our Tween's birthday. There was pizza and roller skating and lots of loud giggling and bacon. 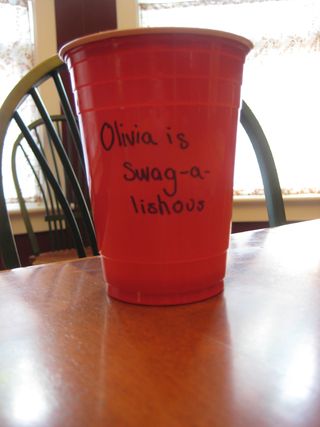 It is not a party without red Solo cups.

As I posted on facebook, I have no idea what time the girls actually fell asleep -- but I do know that they were still going strong at 3:30 a.m. and that at 9 a.m., when I went to wake them up, it looked like a scene from the Walking Dead. A good time was had, which is how it should be. Scott and I, however, are still recovering.

Then, on Saturday, after the extra girls left, the Tween, the Boy, Scott and I were taken to Pie in the Sky  by my husband's father, where were had celebratory ice cream and an epic checkers match broke out. 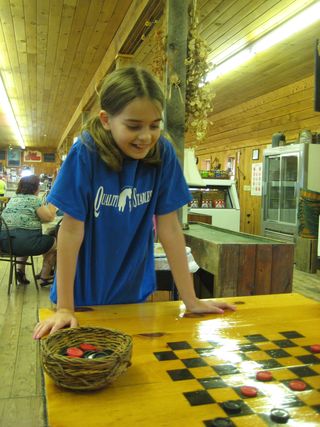 The Boy relies on distraction rather than strategy.

I wandered about while the game went on. And spotted these: 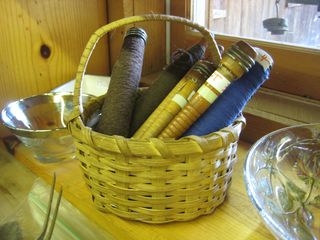 Any fiber people want me to pick these up?

qotd, it's all blood

Guildenstern: Is that what people want?

The Player: It's what we do.

-- Rosencrantz and Guildenstern are Dead, still one of my most favorite plays ever.

Also: A bonus (!) Martini Friday over at another mother runner. This time, I ponder socks and races.

so many things in common

I make no apologies about my love for Jon Stewart. There's so much I'd love to just sit and talk with him about, because I think it would be great good fun. But what I didn't know was that our kids have somethig in common: Celiac Disease.

My daughter's experience was similar to his son's -- lots of vomit, anemia, general malaise, and wasting away. When she was 3, we watched her fade before our eyes. Where the experience differs, however, is in how quickly the Tween was diagnosed. Our peditrician at the time caught it in a flash. It sounds like Stewart's ordeal went on much longer.

The interview is here. It's technically more about Jennifer Esposito's book but, as with most good interviews, it wanders a little. 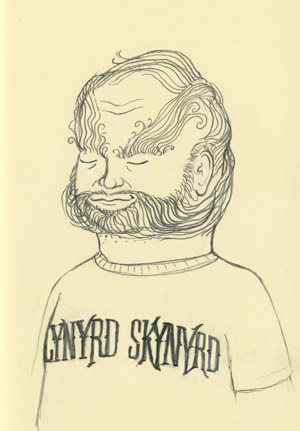 Here at the Hair Club for Super Manly Men, we know that you have a lot of choices when it comes to your hair replacement therapy.

You could go with plugs that have been vigorously cultivated from your should hair.

You could thatch your denuded head with a mat woven from freshly plucked goat beards.

You could choose creams, gels and unguents, rubbed into your manly scalp by strong lady hands.

But when those fail, we know you’ll choose our patented BrowComb (TM) Technology.

Remember, those of us at the Hair Club for Super Manly Men are also clients.

* Glen Weldon is my spirit animal. Here's his take on first lines.

* The bit about South Carolina is fascinating.

* I am an avowed camping hater.

* This has made the rounds but still so funny.

* As a kid who read John Irving far too young (according to some), I couldn't agree more with Judy Blume. I didn't get all of the "adult" bits until I actually was one.

Usually, on Mondays, I like to show-and-tell about our weekend. This weekend, however, I spent in my local indie bookstore, The Green Toad.

I've worked at the Toad for, um, maybe three years. During the academic year, when I'm busy with my "real" job, I only work 3-ish hours per week. In the summers, though, I'm there a lot more, what with having more time, other employees needing more time off, and wanting to get away from my summer vacationing kids. This weekend was a full one -- and I'll be back behind the counter tonight.

The extra cash is nice, don't get me wrong. That's not why I work there, though. I just love bookstores. Really, really. I've worked in them intermittently since I was 16: first a Waldenbooks* in Ross Park Mall, then a college bookstore in Austin,** and now the Toad.***

The most obvious reason I love bookstores is that I love books. That is a given. I like to hang out with all of the books, both the ones I love and force on every person who asks for a recommendation**** and the ones that I would just as soon mock but still firmly believe you have the right to read.***** I've handsold a lot of books this way and hope to continue doing it.

(True story: an older woman comes in nearly every Saturday and asks for something light, set in Europe, and without any deaths because her husband just died after many years of suffering from Alzheimer's. I'm running out of ideas. We've covered the most obvious titles, like Beautiful Ruins. Most of what I suggested lately has been too "weird" for her. Anyone?)

After so many years, I've developed an uncanny ability to remember authors and titles as well as their shelf placement and cover colors. Nine times out of ten, if you mention a title, I can tell you if we have it -- without consulting the computer. Yet in my non-bookstore life, I can barely recall the names of my children or where I put the phone.

But what I love most about bookstores are the people who frequent them. No one ever has to buy books. They aren't like groceries or gas. Nearly everyone who shops at the Toad is there by choice -- and their happiness about all of the books can't help but rub off.

** Also RIP -- and Wallace's University Bookstore is so dead that I can't even find a decent link online.

**** Depends on the person, really. Still I don't think you can go wrong with Jincy Willett, Karen Joy Fowler, or Bill Bryson.

***** Bill O'Reilly and Dick Cheney's tomes leap to mind, to say nothing of the Shades of Grey.

"I'm turning myself into something a little less promising,
A little more useful."

Also: It's Martini Friday! This installment is slighty more somber than the norm. Hilarity (such as it is) will resume soon. (And in case you want to know more about my friend Quinn and/or doula services in the Bath, Maine, area....)

While there are far more important things that are celebrated on this day (and far sillier), I would be remiss if I did not point out that it is National Martini Day.*

* I'm of the opinion that the Martini (cocktail) was invented on the East Coast, simply because that's where most of the Martini (people) are. I never met another Martini when I lived in Texas or Tennessee but here in Yankeedom, they are thick on the ground. Q.E.D. Correlation is causation, yes?

gratuitous corgi, such a noble breed

The Tween has been playing with my camera again. 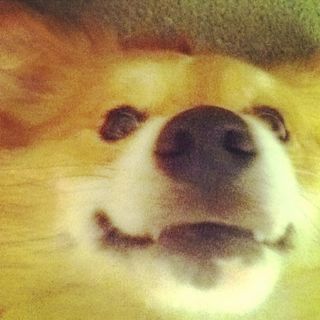 * My sleeper train experience pales in comparison to this one. Of course, our trip was back before the turn of the century.

* Insert "Time Warner" for "Comcast" and you've described my first week of June. I did not shoot Jason Ringenberg with a chicken, however.

* A reflection on Sweater Quest, music, and knitting. (I agree with her, btw. (I also wish I played the cello - but that's a different story.))

* My children made me a much better writer (and human) too.

* Flammable dresses.  (There's an ad. Click through for the story.)