On Monday I drove down to exit 67A of the Garden State Parkway* to pick up my mother and this guy.

His name is Denny. He and Lucy** have gotten on like a house a'fire. Every waking moment has been full of playing and leaping. Both dogs are covered in drool.*** It is doggy heaven.

My mom, as some might recall, doesn't live in New Jersey. A Floridian friend of hers drives up every year to visit with her daughter in the Bruce Springsteen state and mom hitched a ride. She'll be here for two weeks, then we'll do the whole thing in reverse.

It's nice to have both her and Denny here -- but the house is a little bit more chaotic than usual and covered in twice as much dog hair. It's only a matter of time before OSHA shuts us down.

* As I mentioned on Facebook, the Garden State Parkway sucks donkey balls. I'm not sure how long it will take to get my shoulders to unknot from driving 80 miles per hour in bumper to bumper traffic while still being passed like I'm stationary.

** She's feeling a little bit better, by the way. Still limping and prone to just passing out from exhaustion but better. Thanks for the well wishes.

*** Denny also has amorous intentions toward Our Lucy, even though he lacks the necessary puppy making equipment. She's tolerating it but smacks him down when she has had enough.

I had to make a quickie run down to Toms River, NJ, and back (more on that later) and lost track of the day. So a day late:

* Hey! I went to college with this guy!

* Yes. Yes you were wrong to blame her.

* Do you know what it means?

* Our 20th (!) wedding anniversary is today. If I'd planned better, I would have gotten these.

* Mike has been posting some Civil War ephemera he found. The last in the series is here.

I took the dog to the vet a few weeks ago for her yearly check-up and shots. As they do in these parts, they also drew blood to check for Lyme disease. I didn't think much of it because Lucy had been behaving more or less like a two-year old corgi should, which is mostly the best dog ever and an occasional sock-stealing ratfink.

Turns out, she also has Lyme. The vet took a wait and see approach; if she stays asymptomatic, no need to worry. But last week that changed. She developed a limp, then exhibited the "walking on eggshells" symptoms. She stopped eating. In general, she was not a happy pup. 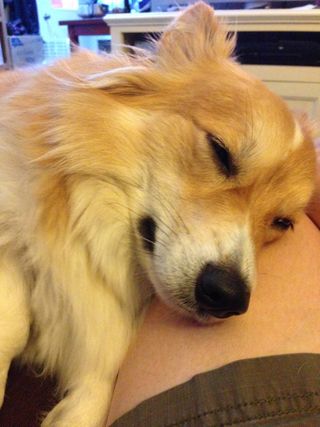 And so antibiotics are on the menu. So far, so good. Pilling a dog is sooooo much easier than pilling a cat. Lucy seems to be feeling better. She has been an extra snuggly pooch, though.

"Now, eating primarily for health is like marrying for money. In other words, it's not entirely crazy, but unless a meal or a relationship commences with yum, I don't see it going anywhere."

-- Roy Blount, Jr. on boiled peanuts in the April/May Garden and Gun.

And in this week's Martini Friday -- a focus on the positive and on lunch.

This is what we do to stumpy dogs who have attempted to eat yet another flip-flop: 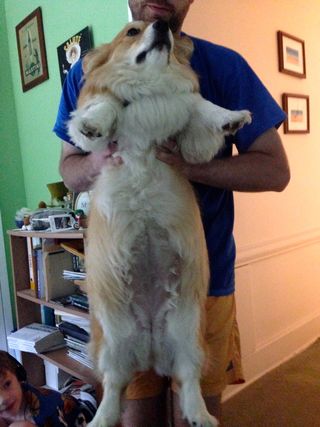 Stumpy, flip flop eating dogs hate this. Do not eat the flip flop.

and now we are nine

The real party will be on Saturday. We did a low-key celebration yesterday, which consisted of a day full of nag-free video games and a trip to Ruffino's, which is where he wanted to eat a birthday dinner. And, yes, because it was his birthday, he could take his Kindle into the restaurant. Otherwise, it's verbotten.

'Twas just the Boy and I, too, because the Tween had a swim meet. We talked about the things important to a nine-year old, which included Minecraft, Bill Cosby, and explosions. Good times.

* Given the number of single socks we have floating around the house, I might need one of these.

* The more you know.

* I may have to put this in my syllabus. Also: I'm thinking about ditching my attendence policy.

* Because we need another Florida?

shameless self-promotion, 397 in a series

From the local almost daily: reflections on an English Muffin.

"Now look, your grace," said Sancho, "what you see over there aren't giants, but windmills, and what seem to be arms are just their sails, that go around in the wind and turn the millstone."

"Obviously," replied Don Quixote, "you don't know much about adventures."

-- Don Quixote as quoted in The Telling Room, which is surprisingly good.

Also: Martini Friday is back! And this one is a double shot.

On Tuesday, the Tween competed in her first swim meet, which was held at the natatorium at Colgate University, about an hour from our house. She's long loved swimming, mind, but this is her first summer on a team.

The Boy kept himself amused as best he could: 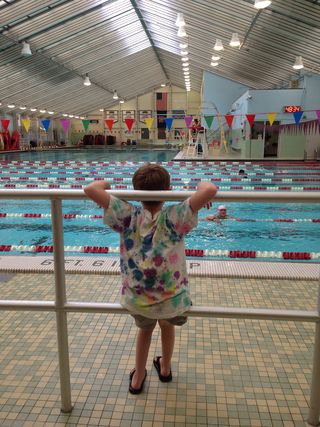 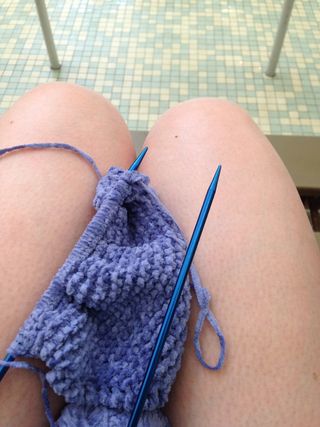 And the Tween swam, and swam well, in my opinion. She was pleased, too. 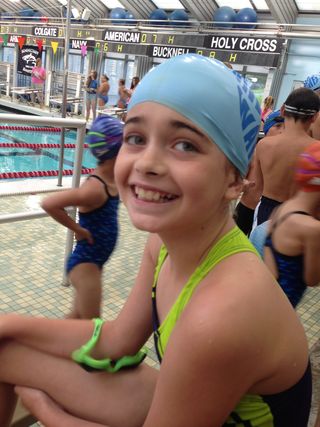 As is our custom after sporting events, we went for ice cream. 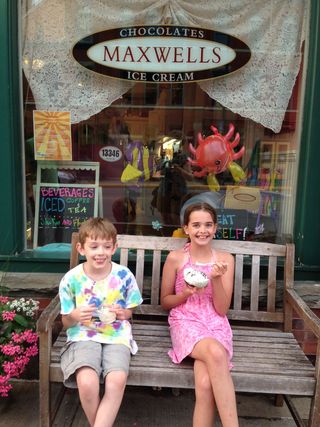 A good day, no matter how you keep score.