that's where it is

Like on Sunday. It was a nutty day, with an extended morning trip to our UU church, followed by a speedy lunch and a trip to the mall to get the Tween some boots, and an even speedier vacuuming of the downstairs so that I could make it out the door to the Catskill Chamber Singers' seasonal concert.*

I went solo and brought some knitting. Worst that happens, I thought, is that I make some progress on a sock during this hour that I've worked so diligently to carve out. Instead, I was delighted.

See - I have a think for Chamber music. Full orchestras confuse me but give me a few voices and/or a quartet and I'm in. Also: this slate of songs was focused on medieval/early Renaissance music**, which is my favorite. Really. I'm all about the Gregorian Chant. Plus (plus!) I knew my favorite Christmas Carol -- the Coventry Carol for those scoring at home*** -- was on the slate.

Reader: I had chills. So, so good. And so, so worth the craziness trying to get to that point. For such an small and isolated city, we have some pretty amazing singers. It was an hour so well spent and gave me that evanescent holiday glow -- and will definitely be on the agenda next year.

* And when I got home, I finished the vacuuming, made dinner, paid some bills, and baked a rum cake. I feel I deserve applause.

** My college thesis was about a medieval morality play called The Castle of Perseverance, which requires its producers to dig a moat around the playing space... anyone?

*** Which I was first introduced to by Alison Moyet in the late 1980s.

"You don't really see ugly people that are old, or a bit grotty and smelly, in the media. If a Martian came down, they would think we were all tall, thin, attractive and wealthy."

-- Jo Brand, who I only knew from her post-Great British Bake Off show on BBC Two until I saw HBO's Getting On, which is a US version of her UK show. Got that? Probably not -- but know that both she and Getting On are wonderful, if not for every taste.

and we trimmed it

One of the advantages to the kids having an early dismissal on Tuesday was that we finally managed to get some ornaments on the tree. 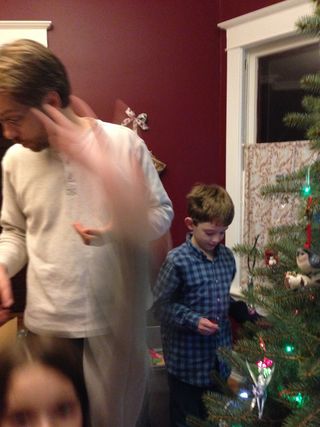 The Boy, with a photo bomb by his sister. Seriously. That's what she yelled before she jumped in. 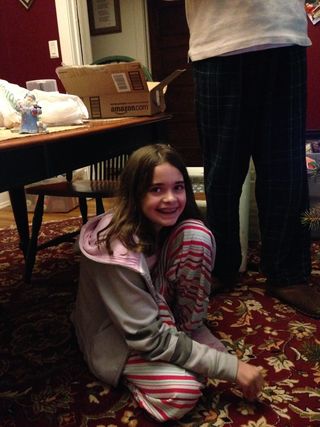 The sister in question, looking impish.

This year I took the time to hang my one string of bubble lights on the tree. I'd forgotten how happy they make me. 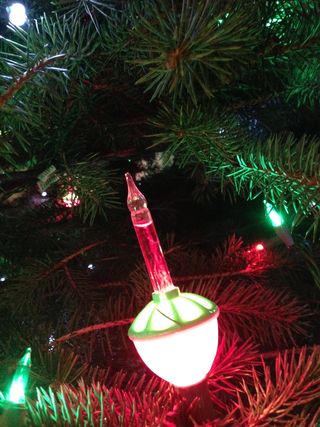 Also making me happy is this ornament, which I picked up during my London trip. 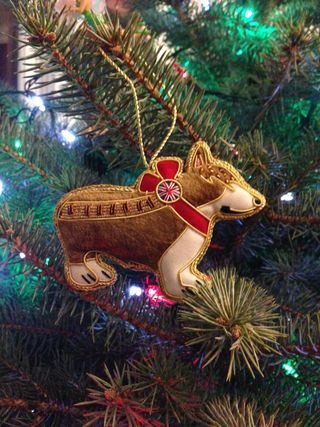 Actually, I'm really just happy I remembered I had it.

As for the actual corgi, well, she doesn't find decorating the tree terribly interesting... 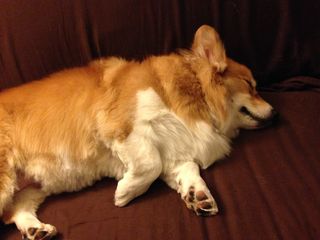 ... and spent the entire time like this. Of course, she'd also spent part of the day at the groomer's place, which is exhausting. I could make a pun here about both tree and dog being trimmed but, well ...

up with figs, the horror 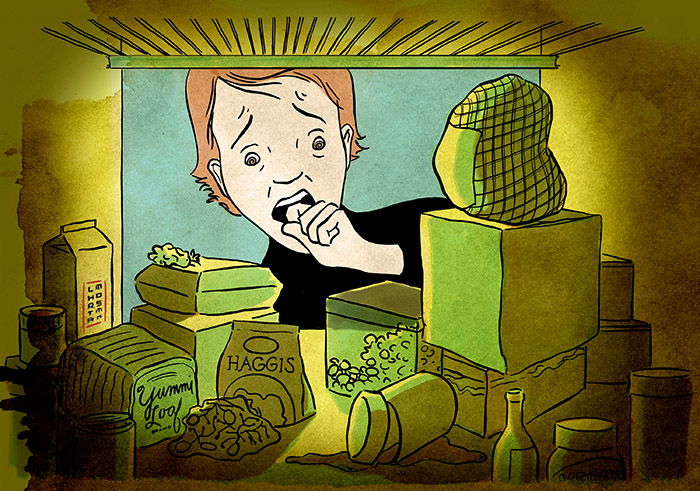 I haven’t told you my other method for dealing with writer’s block. I give myself a choice — I can either write whatever needs to be written or complete some odious task, like scrubbing the innards of the refrigerator or washing all of the upstairs windows or cleaning around the 9-year old Boy’s bed, including the crack between the frame and the mattress, which is where all of the extra-grody stuff lives. Nearly every single time I’ll just sit down and write. And, even if instead choose the odious task, at least there’s one less odious task on my list. It’s a win no matter what.

* Two of my favorite things: food and books.

* Just when you think you'd see it all.

* While I respect your right to do this, I never want to do it myself.

* How to be creative.

attempting the holly and the jolly

Scott and I are not lovers of Christmas. Some of this stems from our general curmudgeonly souls. The bulk of it springs from seasons upon seasons working in various theaters. The Nutcracker, A Christmas Carol, and Best Christmas Pageant Ever lose their luster when you've seen them six shows a week for the better part of two decades. Add to that all of the seasons I worked in various retail outlets and, well, we'd just as soon not deck any halls.

We're not anti-festive mind; just that we both seem inclined to not create our own holiday joy. Still, we do the annual tree hunt because it brings us tons of family fun.* 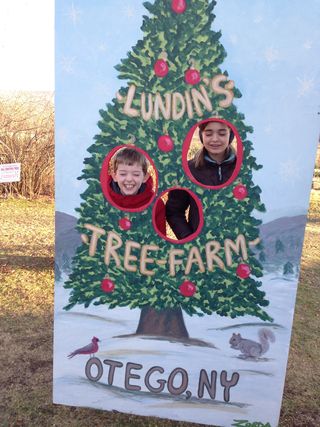 Not that you could tell that we're having family fun based on this picture. You're just going to have to trust me. 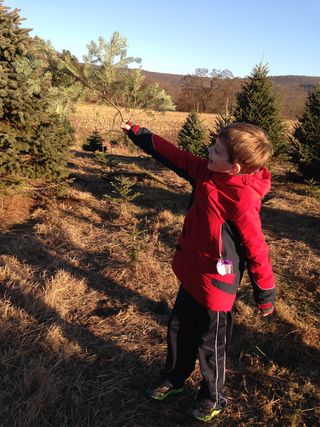 The Boy and his branch, which he later used to whack his sister on the back on shoulders repeatedly. Because sister. 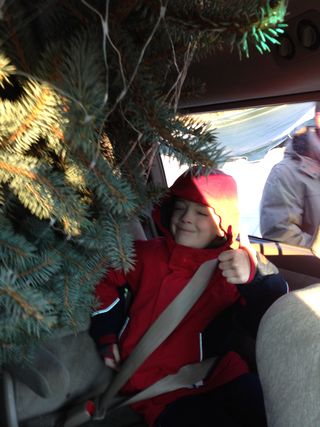 The Boy did approve of the tree we wound up with, even though it was far too large to hit anyone with.

Said tree is now in our house, awaiting lights and ornaments, most of which will then be knocked off of the tree by one of the cats. Because cats.

* I also take great joy in sending and receiving cards.

"Everybody believed that they were special, that they weren't really a waiter, that they were the one who was getting out. ... I had to come to terms with the fact that I was just like everybody else, a girl with a dream and a plate of hot fajitas. You get out not so much because you're special but because you've got enough steel in your soul to crawl up."

-- Ann Patchett as quoted in The Writer's Almanac. Related: Bel Canto is one of my all-time favorite books.

Also: Martini Fridays is all about the Schuylkill.

you know what? never mind.

Here's the thing -- I largely ignore Chuck Pinkey, our local Tea Party partisan who is convinced that things were so much better in the good old days when men were men and everyone else knew their place, which is to realize that the men had it all under control, thank you very much, and that any pain you might be feeling is your own damn fault.

But his column in this week's paper got under my skin, so much so that I spent the morning drafting a response. Then I realized: fuck it. There is no way on this earth or any other than any possible thing I could say or do would make the slightest dent in Pinkey's belief system. My time would be better spent teaching my cat to play the banjo -- because then, at least, we could while away the winter listening to "Foggy Mountain Breakdown."

Besides, Chris Rock said it all better than I possibly could.

up with figs, muscle 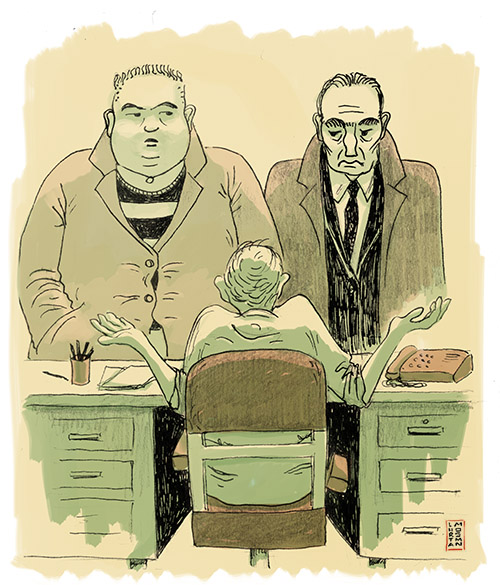 Have I ever told you my sure-fire method for avoiding writer’s block? Seriously - this could not be more true and you just drew an image that lived only in my brain. What I do is this: I image two thuggish guys — one craggy-but-devious, one doughty-but-strong — standing right in front of me demanding copy right now. They know I’ve been holding out, see, and need me to focus on how much I love my knee-caps. Works every time.

* This is my catnip, my crack cocaine.

* Let me be this awesome when my time comes.

* A familiar (and incredibly well reported) story for any who live near a college.

* If you are thinking about taking up running -- and I think you should -- this would be a good podcast to listen to.

* I find this funnier than is seemly.

* Americana music is for realists.