“Inevitably, our children come to see us as we are. Not as we wish we were, or even as we should be.”
― Michael Perry, Visiting Tom: A Man, a Highway, and the Road to Roughneck Grace

And this week's Martini Friday is up!

up with figs, killer squirrel

I’ve long been convinced that, if reincarnation exists, the best living thing to come back as would be a squirrel on a college campus. They just always look like they are having the best time ever, those squirrels, chasing each other around trees and picking up ramen crumbs and not worrying too much about cars and cats. And, it almost goes without saying, pelting undergrads on the noggins with nuts, which is the real draw, when you get right down to it.

* What new moms need to hear.

* Miss Universe National Costumes! And, again! These make me so happy.

* Sometimes you need a chart.

* Given that I live in New York State, I'll be keeping an eye on the Silver case anyway. But I'll also be watching because Preet Bharara is my new hero.

* Because we have no sense of history.

* How to interview a woman writer. (HT Trish.)

* I agree with Linda Holmes on Broad City. Thrilled it exists; doesn't hold my interest.

* This. (And the rest of the episode is pretty amazing, too.)

sometimes, I knit. And dye.

Because I was intrigued when my friend Terri posted her version, I whipped up a little bracelet from a tasty yarn sample (Titus 4ply from Eden Cottage in Slate) tucked into our treat bags at the last Knitter's Review Retreat. 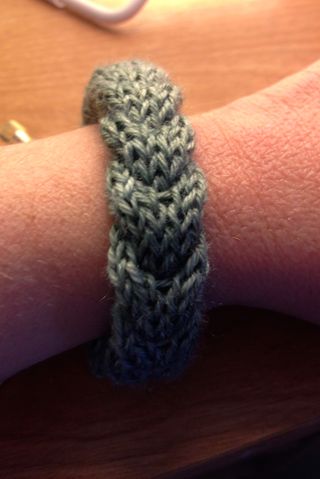 Cute, right? Not sure I'd make another one -- it's more fiddly than I'd like -- but it's cute. And the yarn is tres soft. The pattern is here but modified for a bracelet, not a necklace, which I can't seem to find online.

My wrist did more than model bracelets this weekend. It was also collateral damage in another project. 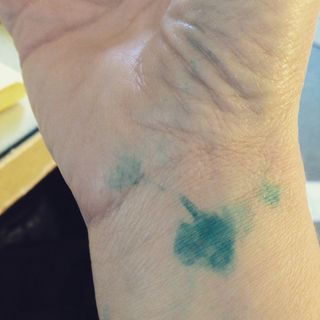 The Tween crossed another milestone off of her list this weekend and dyed her hair, as you do when you are a Tween. Rite of passage. 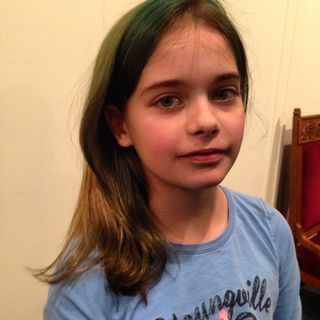 The photo makes it look more subtle than it is. But we have learned a few things for next time. I'll keep you posted.

"No one tells Chris Carter or David E. Kelley, 'Wow, why do you write women so well?' [Agent Carter writer}" Michele Fazekas says. "There's this preconceived notion that women only write women stuff and men can write anything."

did not recite one naughty limerick

I've been meaning to recap my trip to Pawtucket for the Slater Mill Knitting Weekend, where I was Friday night's keynote speaker -- but keep getting distracted by shiny things and children (and a job) with demands. As one does.

So -- the short version: it was lovely. The Slater Mill audience laughed in all the right places and asked questions that were full of insight. Afterwards, many of the assembled knitters had such kind words for me that I will now insist that all places I speak have free-flowing wine before, during, and after the event.*

Then, I crashed into my Comfort Inn bed like a mighty writer who crashes after the event.

The Mill by daylight could not be more scenic. 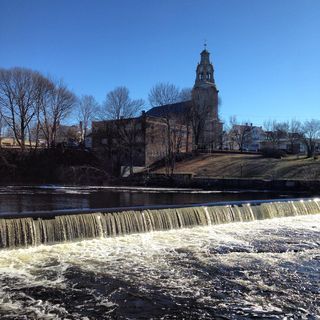 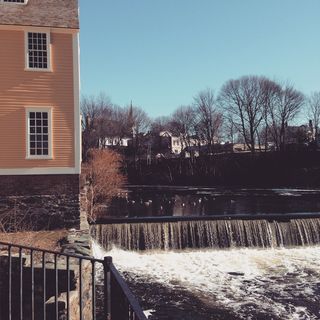 The yellowish building is the main building. And what you can't tell is that those picturesque ducks are likely frozen to the river. There is no cold like a New England cold, which made itself known over the weekend. 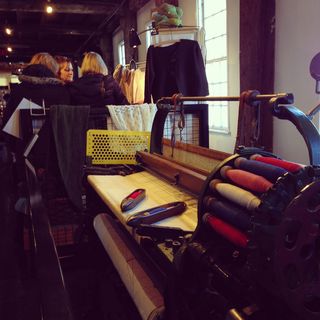 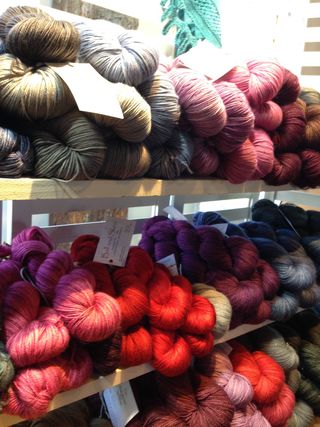 So many lovelies, some of which I took home. Like this Fiddlehead mitten kit from Foxfire: 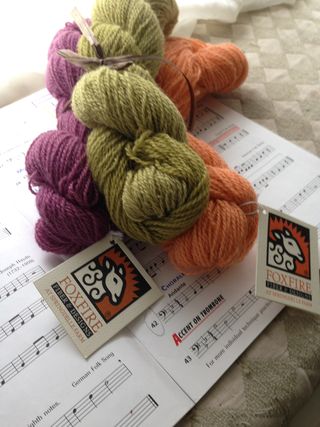 And this scarf in potentia from my new favorite Quebecois dyer Julie Asselin: The picture doesn't even come close to doing the colors justice.

All in all, a great weekend. My heartfelt thanks go to organizers (and generally kick-ass women) Mary Lee Partington, Ruth Sunn, and Lori Urso for all of their enthusiasm and smarts. If you're in the area, drop in. Slater Mill is a wonder for anyone with even the slightest interest in how fabric used to be made.

Other recaps (with better pictures) are here and here, btw.

* I read this piece about Elizabeth Zimmermann and selected parts of Sweater Quest. For those at the event, a picture of my grandmother and her mother: 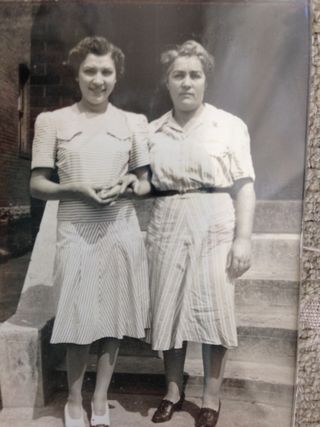 up with figs, alas, poor Lothario 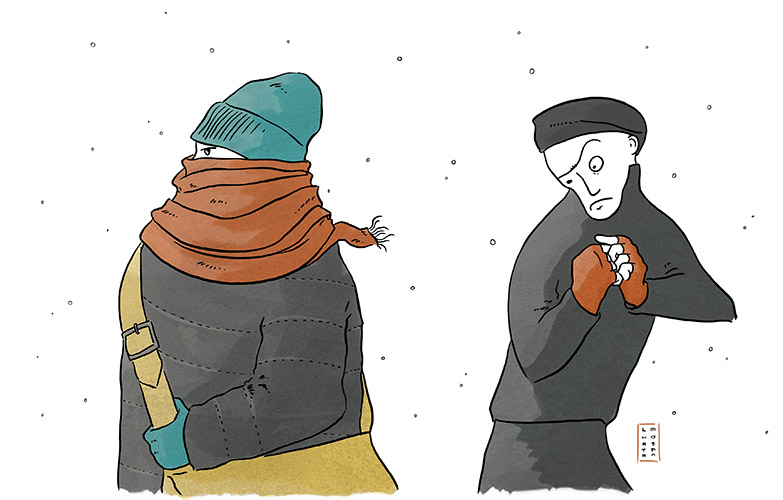 The Lothario of Smith Street hates the winter.

It’s not the ice or the cold or the snow. That the Lothario can handle.

His hate stems from all the fine females who wear big, puffy coats. He can’t admire their fine forms, is what draws his ire. The Lothario can’t tell which chicks to make a move on when, in the big, puffy coats and acres of hats, scarves, and socks, he can’t even tell if they are, indeed, fine females.

It frustrates the Lothario, who yearns for some quality Spring wooing.

* You can try to "fix" education as much as you want -- but until you are willing to face the real problem, nothing will change.

* Start with a cardboard box -- and if you hang on to it long enough, it also become a toy.

* Don't read this if you're already feeling wanderlust-y.

* On a vast lot of rubber duckies. And a related title, that I've read and enjoyed. (HT: Heidi)

* I *heart* the Punch Brothers.

* Most drug users aren't addicts and here's why.

* I'd really have to hate someone to do this to him/her.

qotd + plus running and dullness

Plus: It's Martini Friday!

not knitting but still craft. sort of.

Not sure exactly how it happened but I managed to scratch some projects of off my long-term project list during the past few weeks. A few are still in progress and/or really not ready for their close-up. Two, however, are. 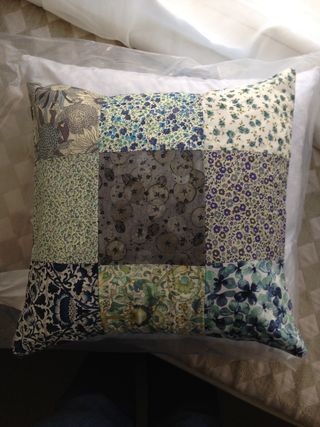 I picked the kit up during my quickie pilgrimage to Liberty London this summer. I could have spent the better part of the day in there, frankly, and it's best that I didn't because I would like to be able to send the kids to college. Still, a pillow kit was a) affordable and b) packable. And so it went.

The biggest challenge was finding a pillow form to fit said cover. The closest craft store is an hour from here so I dove into the internets. The first pillow form -- the size the kit told me to get -- was waaaaaay too big and is the white blob beneath the finished pillow. It's not worth the hassle of returning it so it looks like there's at least one more pillow in my future.

From this point forward, I would like to be addressed as the Pillow Tsarina, thank you very much.

The other big project was to attempt to make puff pastry from scratch.

Yeah. I know. You can buy it. Here, however, I can only get the Pillsbury kind, which tastes like chemicals.* Plus, it's not that hard to make your own, just slightly tedious and a little scary. It's a low-stakes project, too. If I'd screwed it up, I'd be out less than $10 in ingredients.

I didn't screw it up: 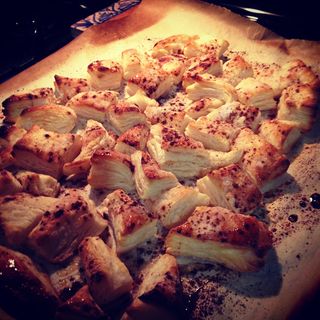 These are the off-cuts, which I baked with cinnamon and sugar.

What I really made was an almond galette a la Mary Berry: 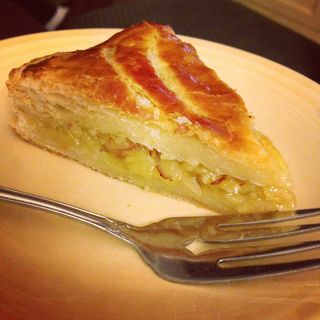 It was good -- but could have been better if I'd rolled the pastry thinner. Next time.

So what have you been working on?