"It wasn’t just that his brain was writing cheques that his body couldn’t cash. It had gone beyond that. Now his feet were borrowing money that his legs hadn’t got, and his back muscles were looking for loose change under the sofa cushions."

* I'm pretty sure the Vimes books are written just for me....

I spent all day yesterday either on the couch like this: 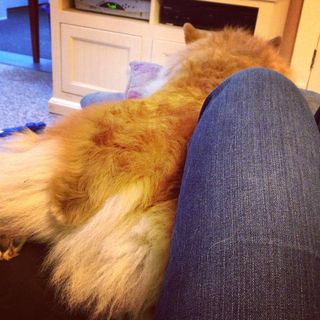 or unconscious in bed.*

My first thought was that one of the children had passed some dread illness along. But this morning the Boy woke up just as sick as I am -- and has added puke to the mix.** So I'm now thinking I might have picked something up on my trip to the city.

Upside: while I still have a ton of stuff I should be doing and will have to catch up on once I can function again, there is nothing crucial this week nor am in training for anything.

The downside, of course, is everything else.

If you are local, I'd suggest treating our house like a plague house and stay outside the perimeter. This bug is pretty awful and I can only bleach so much before I need another nap.

* HRH Lucy didn't know what to do with herself yesterday morning. She'd spend five minutes snuggled with me, then five by the door, then five in her crate, only to then repeat the cycle. Once I gave up on sitting on the couch and lay down in bed, she snuggled right up and napped with me. She groks naps more than one of her people being home in the morning.

** Honestly, today has not been my favorite day.

* Which one is your favorite?

* Does anyone else immediately respond, "EWWWWW."

* All those platitudes are bullshit.

Every year, my office hooks current business and economics students up with alumni who work in those fields in New York City. Usually, a couple of folks I work with go down to keep an eye on things. This year, I got to be one of them.

It was a quick trip -- down Thursday afternoon and back up Saturday morning -- but it's always great to be in the city, no matter how zippy the trip. While I'm nearly certain I couldn't live there*, I rock being a visitor. Give me a Metro Card and a vague plan and I'm good to go. 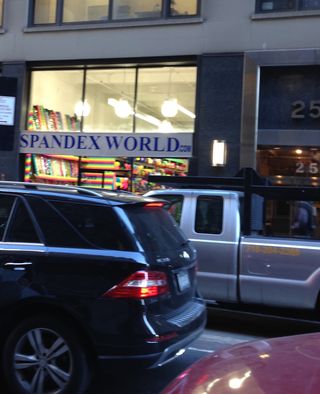 Sadly, I did not have time to go to Spandex World. Life is unfair.

I did get to go to Ernst & Young, Treasury Partners**, and Shawmut Construction.*** And while I have zero envy of our alumnus' jobs in those firms, I am thoroughly jealous of the views. 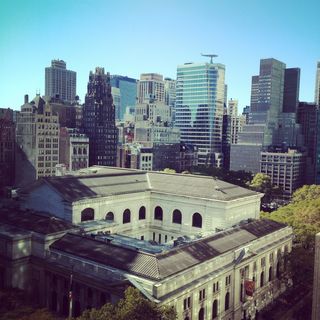 Right? How could you get anything done?

That's the NY Public Library, btw, which is also where I snagged a cup o' joe and a snack. I also think this pattern for a sweater back: 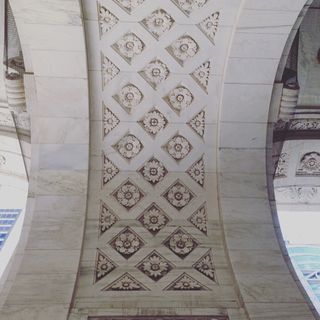 We're planning to take the kids down in December as an early Christmas gift. The Boy, naturally, wants to go to the Nintendo store. I asked the Teen what she wanted to do and her response was, "New York City stuff."**** Which was less helpful.

We'll likely go to the Museum of Natural History. What else do you think we should add to the list?

* unless I had bucket of money

** One of the students described the alumnus in question as a "total baller."

*** While they were at Bloomberg, which another co-worker handled, the students got to lay eyes on the former mayor. He's apparently even shorter than you'd think.

I made this its own separate post, even though I'd initially planned to put it in a "many things." Why? Because I want to find some local folks who'd be interested in Cookbook Club. It's like Fight Club -- but totally different. So nothing like Fight Club.

* What happens when you focus on the women.

* This: 'It feels like I'm desperately homesick, but I'm home.'

* I obsessively watched this show right after 9/11 happened. It was my meatloaf, my mashed potatoes.

* Carl Hiaasen is a national treasure.

I found a new running buddy during Saturday's long run: 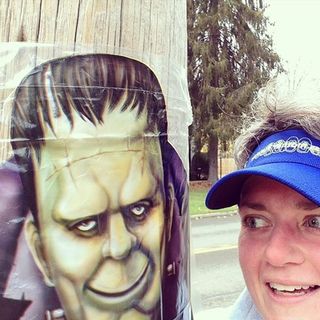 He says his name is Frank. Not much on conversation, though.

"The universe throws us some obvious little pitches sometimes, and we need to be awake enough not to let them slip by."

-- Berkeley Breathed in this Fresh Air interview about the (welcome!) return of Bloom County.

time for a trot?

Coincidentally, I read this New York Times  story nearly five minutes before the information about our local Turkey Trot popped up in my facebook feed. I'll be running on Thanksgiving morning. How about you?

And, just because I'm curious, does your local trot feature a turkey on the t-shirt?

* I laughed so hard -- then I burst into tears.

* Parenting: it's the long game that matters.

* Walk and talk (not related to Aaron Sorkin.)