* On life as an older woman with blue hair.

* There are salads, though.

* The options for writers seems to be either running or drinking.

* Our annual board game vacation in the mountains will take place soon. So many to choose from. And, yeah, they are all so much more fun than Monopoly.

* I'm pleased that the college I work for is nurturing her so well.

* THIS APPEALS TO MY INTERESTS.

* It was the Mary Todd Lincoln joke that got me.

Because both of these landed in my email at about the same time:

* Want gear for Christmas? AMR has got you covered, with discounts on Saucony, Soleus, Balega, and more. So. Much. More!

* I finally read this teaser for the Rock Lobster** Relay and started having ... thoughts. If I should put a team together, who is in?

"The results were especially surprising, [Eric] Churchill says, because the nutritional bar for preventing scurvy is so low. 'You can have a handful of McDonald’s ketchup packets a day, and that’ll give you enough vitamin C to keep you from contracting scurvy,' he says."

-- from Karen D. Brown's Slate story on scurvy. Good info to have, I say, once the zombie apocalypse comes.

shameless self promotion: part 348 in a series

* So it's basically Game of Thrones in Louisiana right now....

* You thought you didn't want to read about Guyana.

* This would be a good holiday gift.

* The cost of college football.

qotd, and so it goes.

Here's the One of Life's Little Ironies Alert: On Monday, I'd scheduled this to post. It's about the death of one of Scalzi's outdoor cats. Having lost pets before, it touched me. Also on Tuesday, our always quasi-feral cat Barney went out and has still not returned. We're starting to suspect his end has come -- or that he's been taken in by some other suckers. But most likely the former. So if you live in our neighborhood and see a black-and-white car with one and a half ears whose just generally a jackass, let us know....

"In its way the last week is a bit of a microcosm of life, with pets as the players: People come into your life, people go out of it. You miss the ones that go, and remember them. You welcome the ones that come in, and try to make their stay in it worth the memory. Life goes on, and it is good. You get to be part of it, too."

-- Scalzi, on the loss of his Lopsided Cat*

* who looks a lot like our dear, departed, staggeringly dim cat Trout.

We've added a new member to the family. 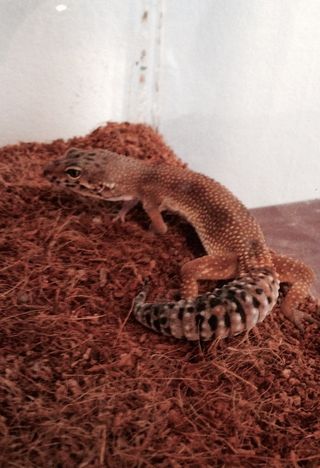 His name is Cosmo and he's a Leopard Gecko. Did I wake up one morning and think, hmmm. Geckos. There's a niche we've not yet filled in our home ecosystem?

No. No, I most emphatically did not.

The Teen, however, has gone on and on about how much she loved them -- and, most importantly, did all of the research needed to care for said reptile. Cosmo is 100% her responsibility, other than parent-financed trips to the store for crickets* and mealworms**.

We're nearly a month into Gecko-ness and so far, so good. And, yes, he has been 100% her problem, which is nice, you know?

** even more icky than I remember from high school bio.

* I might just have to print this out and put it on the fridge.

* This isn't alarming at all.

* On small towns and suicides.

* If you enjoy Science Fiction at all, you really should read these books -- and this review does a great job of explaining why.

* What ticks me off the most is how nothing happens.

* Note to self: convince Teen to start watching Daria. (Also note to self: rewatch Daria.)

I watch a lot of documentaries, so many, in fact, that I've started to lose patience with feature films, what with their flashy effects and too pat story-telling. Which isn't to say I can't intellectually appreciate big explosions and bravura performances, just that I tend to not get too emotionally invested in them.

My recent dread illness gave me lots of couch time to catch up on my docs. And, just in case you, too, like a good true tale, here are three that I didn't fall asleep during:

* The Diplomat -- while I was old enough during the Balkan crisis to know that there was one, I wasn't old enough to really understand what was going on. I get it, now, and am retroactively horrified. What might be most interesting about this film isn't so much the history but what it means for a son to tell the story of his famous (and infamous) Dad, who seemed to be at the table during quite a few global conflicts.

* How to Dance in Ohio -- Three young adults on the autism spectrum get ready for a dance. The filmmakers never overtly go for the viewer's heartstrings but still tug 'em by being honest. (Some of the same team also made Stagedoor, which is what every kid who wants to be in the theater should watch.)

* Mile Mile and a Half -- A group of artists decide to hike the John Muir Trail. Unlike Wild, which is certainly on my list of most favorite films (even though it is not strictly a documentary), Mile... has zero drama. It's not deep. They all get along. Nothing terribly dramatic happens. The result, however, is gorgeous. Almost gorgeous enough to make me want to hike the JMT, which is crazy talk.

And not a movie and (hopefully) not a documentary: Getting On, which just returned for its third and final season. While a comedy (sort of) about geriatric ward might not be to every viewer's taste, it most decidedly is to mine. Plus, I have an abiding love for Laurie Metcalf and Alex Bornstein (whose recent (seriously NSFW) stint on @midnight nearly killed me.)

So what films/shows have tickled your fancy lately?

"... our founders were really crabby people who were angry a lot of the time. I find it weirdly reassuring to think about these founders not as this wise generation that went extinct. They had their moments, and they certainly could do a lot worse, but they weren’t perfect. Jefferson, who was probably the most brilliant one of them, was a terrible governor of Virginia. Like, he can’t figure out how to have Virginia get it together to supply the army that’s defending Virginia."

-- Sarah Vowell on her most recent book.