that time of year again...

As I have done for the last four years at this time, I gave the last sermon of the current year at the UUSO. It has now become a tradition.

And as I have done for the last four years, I'm putting the full (uncorrected) text on this here blog and will post a link to the podcast version once it is a thing I can link to. I'll put it behind the cut. Before you click on, let me be the first to wish you a happy New Year.

Before the sermon text, however, the reading I chose, read by the man who wrote it: "Forgetfulness" by Billy Collins.

After a while, I realized that what Americans called a "dysfunctional family" is what we in England call "a family," having never encountered any of these functional ones.

shameless self promotion, 512 in a series

"Norovirus sends tens of thousands of people to the hospital each year and kills as many as 800. Overall, estimates the CDC, foodborne illnesses kill about 3,000 Americans annually."

-- Emily Sohn at NPR on the "stomach flu." The upshot of which, imo, is that while terrorism and gun violence is totally a thing, The bacterial, viral, and fungal world also want you dead and are much more effective at doing the job.

not the ending we'd anticipated 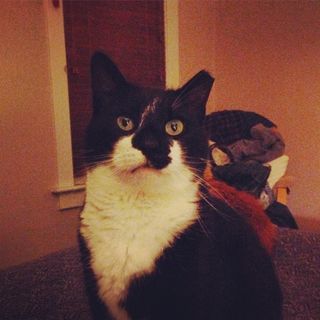 Yes, I know it's better to keep cats inside. Our other cat is an indoor one. But Barney spent the first eight months of his like in a barn, hence the name, and that fending for yourself habit is one we've not been able to break.

Almost four weeks ago, Barney went outside and failed to return. After the first week passed, I figured that either a) he'd found a new batch of suckers to take him in or b) he'd tangled with something larger and not won. By week two, I was pretty sure we'd become a one cat family.

And then on Thursday last week, the cat came back at about 6 a.m. and announced his presence by yowling at my 2nd story office window, which has long been his favorite entrance to our house. 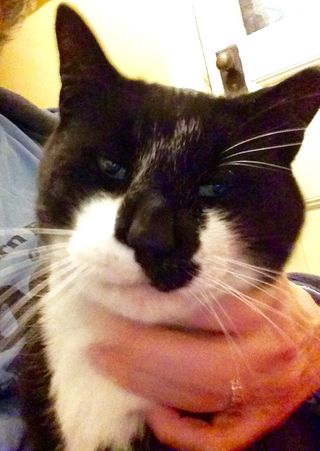 He was kind of grimy, yes, and had lost a few pounds (which he won't miss, if you get what I'm saying*) but appears otherwise unscathed. It took him all of five minutes to try to bite my hand as I was petting him, which is standard Barney behavior because he's kind of a jackass. He does seem extra cuddle-y lately, though.

It's great that he came back. And it's great that my expectations were upended. His sudden return does make me wonder what he'd been up to but he's not dropping any hints. Jerk.

*which is that he was pretty fat when he left

“We get on like a house on fire, don’t we, Claude?”
I picture the flames, the screaming. “Yes,” I say.
–Paul Murray, The Mark and the Void

Also: I chit-chatted with Sarah Bowen Shea about acupuncture and running for the Another Mother Runner podcast this week. Give it a listen, if you are so inclined, and you can learn about my love for cupping.