do the work. the magic will come.

A million years ago (or, you know, about 25), I worked in the theater in Austin. In the mid-1990s, it was the place to be if you really wanted to learn and work and grow in the arts. And while it was hard on so many levels -- money was in short supply, my own mental health was already unhelpful, and just being in my early 20s -- I wouldn’t trade that time for anything. It was as fulfilling and, at time, fun as it was hard.

Ultimately, my professional life steered me out of theater. I got stuck at a crossroads between what I was trained to do but that was starting to wear me down and what I always wanted to try to do but was too scared to walk down a road I didn’t know. For a while, I did both, writing about theater while still working as a stage manager for shows that pulled at me when I read them.

And, yes, in Austin at the time there was a enough live theater to write two or three (or more) reviews/essays weekly. It was like a live theater firehose -- but in a good way.

I always wanted to work on any show that Daniel Alexander Jones was involved with. From the first moment I met him, which was in the lobby of Hyde Park Theater, I felt a connection to him. Maybe it was because he was my age -- I spent a lot of time working with folks who were at least ten years older, and the difference between early 20s and early 30s is vast. Maybe it was something cosmic -- but the pragmatist me rejects that while the rest of me tells the pragmatist to just get over itself already and lean in.

Our lives intertwined in Austin. I stage managed a few productions he was in or directed (and have a much longer story to tell about Talking Bones, his show that very nearly broke me). At the Chronicle, I did my best to document all that was going on then, including talking to Daniel and Vicky Boone, who really deserves a book more than a blog post. My husband designed lights for Blood: Shock: Boogie, which was where Jomama Jones began her manifestation.

Hang onto Jomama Jones for a minute. I’ll circle back.

Eventually, we all left Austin when it was time for that to happen. I stopped doing theater and, frankly, don’t really miss it much. Scott, my husband, got a gig as the technical director in the theater department at SUNY Oneonta. And Daniel is a performance artist, a phrase I bristle at because it sounds so very self-indulgent and esoteric. But is the best phrase to describe his work.

I saw Daniel’s last show, DUAT, the night before I ran the New York City marathon. Even though we’d kept in touch and grabbed the occasional dinner together, that was the first show of his I’d seen in decades. Dang, I thought, about fifteen minutes in. He knows exactly what he’s doing and what he’s doing is amazing. Not that he didn’t know how to perform 20 years ago, mind. But DUAT was the work of a skilled grown-up who knows how to get out of his own way.

Cut to a couple of weeks ago when my almost-16-year old and I were sitting on the couch watching Drag Race. Some domino in my brain fell. “Do you want to go down to the city with me to see my friend’s show? It’s an evening with Jomama Jones, who is sort of his feminine alter-ego but not really. She’s more this celestial being he channels? But not? It’s not drag but it’s also not-not drag? Anyway,” I said. “I think you’d enjoy it."

Cut to Saturday, when Scott, the Teen, and I made a super-fast trip to Manhattan.

Because of the trip, we missed our local March for Our Lives but wandered through Bryant Park, which seemed to be where a lot of marchers drifted after the march further uptown. After a wander through the park and a trip to the Japanese bookstore, we checked out the Public Library’s exhibition about the protest movements of the 1960s, which seemed apropos. then we went downtown to see Jomama’s Black Light at the Public Theater.

The New York Times review gives you the postcard version of what the show is like (and I disagree about the songs). It can’t capture what that room felt like, as Jomama gradually pulled each audience member into her orbit. It’s a show about the times we’re in. It’s about the word “witness," like the word “love," being a verb. It’s also wry and warm and honest and entertaining.

You never quite know how a teenager will respond, especially to something her parents take her to. I knew it was the right call when I glanced at her at the middle of the show and could see her drinking in every single moment. Something was going on in the Teen, even if she isn’t able to articulate it yet.

After the show, when we introduced her officially to Daniel, she went right in for a hug, which is not her usual response to a stranger. When we were leaving the theater, she asked for a second hug.

That would have been enough. But Black Light keeps reverberating in me, too. Part of it is because it reminds me of who I was and who I’ve become and how I couldn’t have predicted any of this, not even with infinite monkeys and typewriters. Part of it is a nudge to keep doing the work, even when it feels like the work isn’t important. And it’s a reminder that the long moral arc of the universe needs us to bend it.

Also? It reminded me that, sometimes, there is magic. 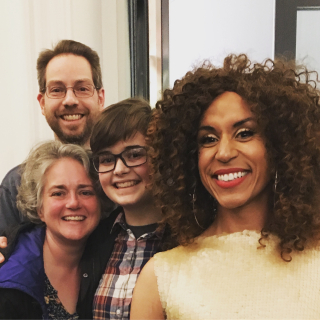 qotd, the umlaut sells the joke

"I understand the argument that both Speaker Ryan and Leader McConnell need to calibrate their remarks to stay in the middle of the sentiment of their respective caucuses. Paul Ryan knows the Trump-hadis, yahoos, InfoWars conspiracy fanboys (looking at you, Matt Gaetz), dead-enders, and political anarchists on his right flank are restive, worrisome, and would stone him to death in a hot minute if Trump asked them to do so. In the center of the GOP caucus, the sense of doom is so thick you can cut it with a knife. For McConnell, his crafty, baroque mental calculus is less clear, but with Jeff Flake and John McCain headed out the door, he’s left with almost no one willing to publicly stand up and take on this president. For all that, both men are on the hot seat this week as Trump edges closer to Muellerdämmerung."

-- Rick Wilson, Only Ryan and McConnell  can pen in Tyrannosaurus Trump.

shameless self-promotion, 8 in a series

Just in case you ever wondered what my mother runner origin story is, it's over here on the Another Mother Runner blog.

qotd, how else will we learn?

This, of course, includes the country that elected him. Mueller is teaching an awful lesson, but one that is no less important for the view it gives us of our republic and ourselves."

shameless self-promotion: 628 in a series.

This week's Dry Martini column: in which I run a little and rest a lot.

“I think [Bowie] understood happiness and pleasure really well,” [Laurie Anderson] said, “and also, he wasn’t pushing difficult stuff away. As an artist, he loved stuff that had real pain in it. I thought of him as such a successful human being.”

-- From “The Bowie You’ve Never Seen” in the New York Times.