shameless self promotion, 63 in a series

I’d be lying if I said things weren’t a little chaotic with a new, pony-sized doggo in the house. He and the corgi have had a few teeth-bared and all-the-growling arguments (one of which ended with her entire head in his mouth, which shaved about a decade off of my life) but then lay down together for naps so it seems to just be a part of figuring out the pack order. My bets are on the corg coming out on top. Though she be but little, she is fierce. And stubborn. And bossy.

As for Lobo, he’s taking it in stride: I’m starting to think about writing a children’s book. It would be about how hard it is to adjust to a new sibling, especially when that new sibling seems to take up all the space (both literal and emotional) in the house. Anyone good at drawing dogs?

Also: I may need to up my vacuuming routine.

In other news, my latest Dry Martini column, which contains no dogs but does involve pictures of the beach.

He’s from Puerto Rico. He lives with us now. How this came to be is kind of a long story. Settle in.

Lucy, our corgi, has entered middle age. She’s not an old dog, mind, but is starting to slow down. The worst attribute of dogs is that they don’t last forever and we wanted to get a new dog into the house while the older dog still had the energy to help us train him or her. That window was starting to close.

So I started the hunt. I wanted to get a rescue -- but the shelters in this area are full of pit bulls with problems. While I have zero problems with pit bulls, the “with problems” was a road block. I just don’t have the energy, y’all, which is why I also wanted a young dog but not a puppy. And a dog that wouldn’t try to eat the cats or the kids. Which was turning into a bigger problem than I’d imagined.

A work friend -- she rescues Great Danes (and likely could have hooked me up with one if I felt I could handle the drool (I can’t)) -- mentioned the Sato Project. I got in contact with them, talked about our needs, and, Bob’s your uncle, we were hooked up with Lobo, who was still in PR but would be flown up to a muni airport near Newark, NJ, on August 18.

Perfect, we thought. We would be visiting friends in New Jersey and we scheduled to drive home that day anyway. Newark would only be a little bit out of the way. It’s like fate had put her golden finger on the whole endeavor.

On Wednesday, I got an email letting me know that the airport was having its runways painted on the 18th and that the flight would be delayed until the 19th. Not a huge deal, really. We re-jiggered some plans and decided I would drive home on the 18th because I had some stuff to get done before the end of the weekend, Scott and the kids would spend an extra night with our friends, then go get Lobo at 8 a.m. on the 19th.

Which is what they did - except the charter flight left PR later than expected (which is an even longer story) and wouldn’t hit near Newark until 11:30 a.m. So Scott and the kids wandered around and enjoyed whatever local culture was open at that hour on a Sunday. (It was McDonalds, Trader Joes, and Petsmart, in case you wondered.)

Shortly before the plane was due to land, it was diverted to Columbus, Ohio, because of wind and/or fuel and/or restricted airspace because of the president’s round of golf. After refueling, the flight would land at 1-ish.

Except it couldn’t because the wind and/or golf hadn’t stopped. So, instead, it landed in Allentown, PA, at 1-ish. At an airport that hadn’t ever really had 50 dogs turn up on a charter plane and was a little caught out by the whole thing. To say nothing of the dogs themselves, who had been packed up and flown around for hours and hours by this point.

Absolutely none of this, by the way, is anyone’s fault. Sometimes, shit just happens - and it seems to happen a lot when airplanes are involved. 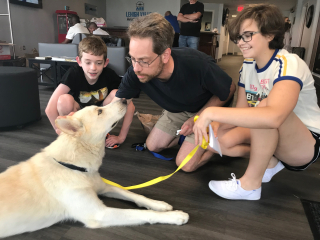 Lobo, Scott, and the kids met each other in Allentown at 2 or so. And it was good. 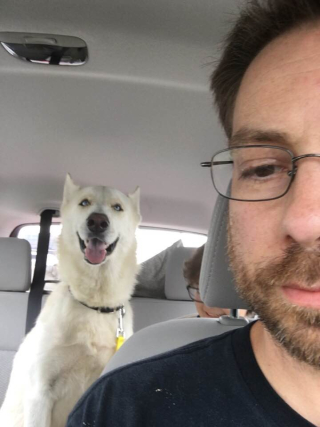 And then it was time for the three hour drive home, which Lobo celebrated by sleeping the whole way.

When we got here, he hit the back yard and peed for a good five minutes, so much so that I thought about this. Then I got my first look at our new gentle giant, who is a very good boy and twice the size I thought he’d be. I didn’t think we’d be getting our own direwolf. Still and all, he’s a keeper.

We don’t know a lot about his background, other than he was found in the streets of Barranquilla and fostered for the last few months. When he was found, it was pretty clear he’d been in at least one fight, with puncture wounds and not able to put weight on one of his front legs. He groks riding in cars, however, and will sit on command. So who knows what adventures he’s had.

A note about the name Lobo: he came with it and, despite my daughter’s dislike for the name, we’re keeping it. His full name is our hearts will be Lobo Blanco, because Lobo is just a dog but Lobo Blanco is a dog with a story.

So far, he and the corgi are getting along well. She only gets growly when he sticks his nose in her ample hind-end. Which is fair.

Also so far, he wants to be where his new people are, no matter what. Last night, Maddy slept in the front room with him so that he wouldn’t howl all night.

It’s a shame they don’t get along at all.

"'Insatiable' Is Lazy And Dull, But At Least It's Insulting"

If you love that headline (and I do), you'll enjoy the review (and I did).

shameless self-promotion, 6.2 in a series

Over at the Another Mother Runner blog: How I won Beach to Beacon.

Also: a reminder -- winter is coming. You will need mittens. Let me knit some for you.