From her yadoya in Shingoji, Isabella witnesses a small procession walk past the house, “consisting of a decorated palanquin, carried and followed by priests, with capes and stoles over crimson chasubles and white cassocks. This ark, they said, contained papers inscribed with the names of people and the evils they feared, and the priests were carrying the papers to throw in the river.”

So maybe that’s a tradition to revive this weekend? Couldn’t hurt.

After her night there, Isabella takes a boat to Kubota, which as far as I can tell, is essentially what we now call Akita.* It’s a good-sized city of 36,000 people. Ito takes her for “foreign food, ”which is a good beef-steak, an excellent curry, cucumbers**, and foreign salt and mustard. It was a meal she needed. 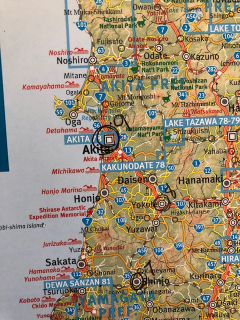 During the next few days, she visits a hospital, where the “odour of carbolic acid pervades…there were spray producers enough to satisfy Dr. Lister!” She also visits the Normal school, which is where teachers are taught how to teach.*** The approves of the natural science curriculum, which uses Ganot’s Physics as its text.

“My next visit was to a factory of handloom silk weavers, where 180 hands, half to them women, are employed. These new industrial openings for respectable employment for women and girls are very important and tend in the direction of a much-needed social reform.” 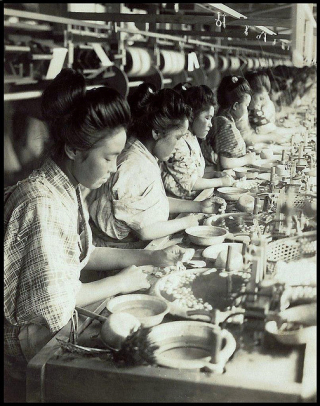 “On the whole, I like Kubota better than any other Japanese town, perhaps because it is so completely Japanese and has no air of having seen better days….I have become quite used to Japanese life, and think that I learn more about it in traveling in this solitary way than I should otherwise.”

*Kubota was the name of the castle that once stood in the center of what’s now Akita. I think.

*** the SUNY school where I taught and my husband teaches started as a Normal school.

Isabella is stuck in Akita/Kubota because the rain “is so ceaseless as to be truly ‘a plague of immoderate rain and waters.’” Others arriving at the yadoya have tales of impassable roads and washed-away bridges. She and Ito are staying put until it improves.

She’s taking this time to write a bit about Ito. While her observations go into great detail,* a couple of sentences stand out:

“He is never late, never dawdles, never goes out in the evenings except on errands for me, never touches sake, is never disobedient, never requires to be told the same thing twice, is always within hearing, has a good deal of tact as to what he repeats, and all with an undisguised view of his own interest.”

Most of his wages are sent to his mom, a widow, and the remainder is spent on sweets, tobacco, and “the luxury of frequent shampooing.”

His strongest feeling, Isabella thinks, is his patriotism. “I never met with such a boastful display of it, except in a Scotchman or an American.”

She also has some words to say about Japanese horses:

“I have now ridden, or rather sat, upon 76 horses, all horrible. They all stumble. The loins of some are higher than their shoulders, so that one slips forwards, and the back-bones of all are ridgy. Their hind feet grow into points which turn up, and their hind legs all turn outwards, like those of a cat, from carrying heavy burdens at an early age. The same thing gives them a roll in their gait, which is increased by their awkward shoes.”

However, “they are neither kicked nor beaten, not threatened in rough tones, and when they die they are decently buried, and have stones placed over their graves.”

Tomorrow, btw, we’ll still be in Kubota BUT there will be a wedding to attend.

* short version: He doesn’t hesitate to “squeeze” a little out of Isabella but nothing to egregious and she could have done worse in a guide.