Izzy Bird, customs of the country

Isabella is just north of Shinjo.* It is July 18 and she is ill enough from bites and stings** that they have called a Japanese doctor for aid. 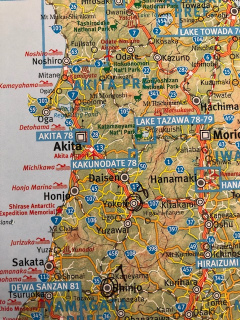 After Ito puts on his best silk outfit and the doctor, also in silk, prostrates himself the times in front of Isabella, he asks to see her “‘honourable hand,’ which he examined carefully, and then my ‘honourable foot.’ He felt my pulse and looked at my eyes with a magnifying glass, and with much sucking in of his breath — a sign of good breeding and politeness — informed me that I had much fever, which I knew before; then that I must rest, which I also knew; then he lighted his pipe and contemplated me.”

The doctor sends for his black lacquer chest, mixed up a lotion and a “febrifuge,*** which, as it is purely vegetable, I have not hesitated to take, and told me to drink it in hot water, and to avoid sake for a day or two!”

His training and treatments will sound familiar to anyone who has met an acupuncturist. He relies on needles and moxa as well as certain “animal and vegetable medicines,**** and certain kinds of food. The use of leeches and blisters is unknown to him, and he regards mineral drugs with obvious suspicion. He has heard of chloroform, but has never seen it used, and considers that in maternity, it must be fatal either to mother or child. He asked me (and I have twice before been asked the same question) whether it is not by its use that we endeavour to keep down our redundant population!”

* Not sure where to put this but want to share, sometimes, Isabella describes things in amusingly concise ways. My recent favorite is “samisen, that instrument of dismay.”

** left hand stung by a hornet and gadfly; ulcerated spot on her foot where she was bitten by a “horse ant.”

This part of Isabella’s journey seems marked by illness and death but not, you know, in a bad way. It’s more that she is interested in all of the routines of life - and has simply encountered more of the “in sickness” ones that the “in health” ones.

She is near Yakote (8 above) and has been invited to a Buddhist funeral. She borrowed an appropriate kimono from the teahouse, which was a thing you could do, apparently. She put a blue hood over her head and Ito coached her through the rituals of the thing.

Once such is that the deceased is laid with his head to the north. A saucer of oil with a lit rush, cakes of uncooked rice dough, and a saucer of incense sticks are nearby. The priests choose the kaimiyo (the posthumous name), write it on a tablet of white wood, then sit by the corpse. Forty-eight hours later, the body is washed, prayed over, has its head shaved, and dressed in a white linen or cotton robe.

Then, it gets interesting.

At the service, the “widow was painted white; her lips were reddened with vermillion; her hair was elaborately dressed and ornamented with carved shell pins; she wore a beautiful dress of sky-blue silk, with a haori** of fine white crepe and a scarlet crepe grilled embroidered in gold, and looked like a bride on her marriage day rather than a widow.”

“Owing to the beauty of the dresses and the amount of blue and white silk,” Isabella observes, “the room had a festal rather than a funereal look.”

The deceased processed to the graveyard by a priest carrying his “dead name” tablet, followed by one carrying a lotus blossom, then ten priest followed, “two by two, chanting litanies from books,” then the coffin carried by four men, then the widow, then everyone else.

Once interred and the prayers were said, the widow walked home unattended. “There were now hired mourners or any signs of grief, but nothing could be more solemn, reverent, and decorous, than the whole service.”

* My hips and knees hurt just thinking about this. There was also some debate about how the bodies are coaxed into this position once rigor mortis sets in. I’ll spare you that.