It is July 4 and Isabella is traveling to Niigata by boat on the Agano river. The first photo is a close-up of our trusty map; the second one shows how far she has traveled. 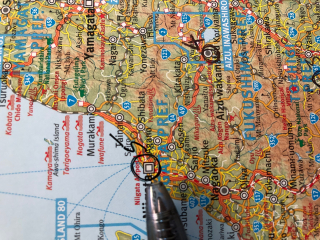 The boat itself is not a big one: 6’ wide and 45’ long. There is one man sculling at the stern and one “pulling an oar” at the bow. It is laden with bags of rice, crates of pottery, and 25 passengers, who get dropped off along the way. They reach Niigata with three. Isabella sits on a chair on top of the cargo and is loving not having to ride a grumpy horse up the mountains in the mud.

It’s a gorgeous trip. For the first 12 miles, the river is “hemmed in by lofty cliffs, studded with visible and sunken rocks, making several abrupt turns and shallowing in many places, hurries a boat swiftly downwards.

“… the downward passages apparently barred by fantastic mountains, which just opened their rocky gates wide enough to let us through, and then closed again. Pinnacles and needles of bare, flushed rock rose out of luxuriant vegetation… There were mountains connected by ridges no broader than a horse’s back, others with great gray buttresses, deep chasms cleft by streams, temples with pagoda roofs on heights, sunny villages with deep-thatched roofs hidden away among blossoming trees, and through rifts in the nearer ranges glimpses of snowy mountains.”

Closer to Niigata, the terrain flattens out and becomes “a broad, full stream winding marvelously through a wooded and tolerably level country…except the boatmen and myself, no one was awake during the hot, silent afternoon — it was dreamy and delicious.”

While Isabella’s trip cannot be had in the modern world, you can travel the same route on the Ban’etsu west line (its mascot is below) or via Journeys in Japan. 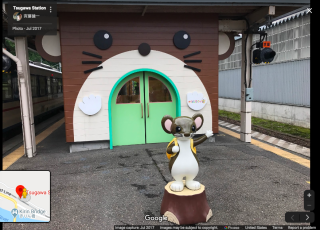 Isabella spent just over a week in Niigata, resting up for the next push to Hokkaido. The weather has been “abominable. The sun has been seen just once, the mountains, which are 30 miles off, not at all. The clouds are a brownish grey, the air moist and motionless, the mercury has varied from 82 degrees in the day to 80 degrees at night…evening does not bring coolness, but myriads of flying, creeping, jumping, running creatures, all with power to hurt, which replace the day mosquitos, villains with spotted legs, which bite and poison one without the warning hum.”

Despite that, she has spent time seeing the town, and has discovered one of the parts of Japanese life I find most charming: backyard gardens that are made to look like forests in miniature.

“… a landscape is skillfully dwarfed in a space often not more than 30 feet square. A lake, a rock-work, a bridge, a stone lantern, and a deformed pine are indispensable; but whenever circumstances and means admit of it, quaintness of all kinds are introduced. Small pavilions, retreats for tea-making, reading, sleeping in quiet and coolness, fishing under cover, and drinking sake; bronze pagodas, cascades falling from the mouths of bronze dragons; rock caves, with old and silver fish darting in and out; lakes with rocky islands, streams crossed by green bridges, just high enough to allow a rat or frog to pass under ….”