Isabella’s next few stops are kind of a guess. From Nikko (labeled 3 in the picture), she hops on horseback — the roads are more like trails and kurumas can’t pass — and winds up in Aizu-wakamatsu (4) a couple of days later. The towns she passes through/stays in are a) maybe called something else now; b) no longer exist or c) so anglicized in her letters that they no longer resemble what they are in Japanese. 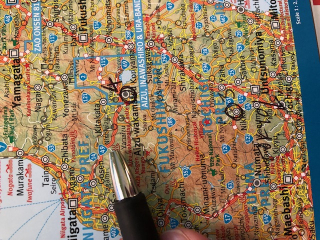 Regardless, it’s on this path that shit starts getting real. It has also started raining — sometimes a drizzle, sometimes a deluge, and all points in between — which it will do for the next few weeks.

“A road, at this time a quagmire, intersected by a rapid stream, crossed in many places by planks, runs through the village. The stream is at once ‘lavatory’ and ‘drinking fountain.’ People come back from their work, sit on the planks, take off their muddy clothes and wring them out, and bathe their feet in the current.

“On either side there are dwellings, in front of which are much-decayed manure heaps, and the women were engaged in breaking them up and treading them into pulp with their bare feet. All wear the vest and trousers at their work, but only the short petticoats in their houses… the younger children wear nothing but string and an amulet. The persons, clothing, and houses are alive with vermin, and if the word squalor can be applied to independent and industrious people, they were squalid.”

In another village, further on…

“The houses in this region … are hermetically sealed at night, both in summer and winter … literally boxing them in, so that, unless [the house] is falling to pieces, which is rarely the case, none ht the air vitiated by the breathing of many persons, by the emanations from their bodies and clothing, by the miasmata produced by defective domestic arrangements, and by the fumes from charcoal hibachi, can ever be renewed.

“… unless the women work in the fields, they had over charcoal fumes the while day for five months of the year, engaged in the process of cooking, or in the attempt to get warm…. The married women look at if they have never known youth, and their skin is apt to be like tanned leather.”

Isabella is still on the same trail as yesterday. The view is spectacular, for the most part. The horses are not. They bite and kick and grump. They also are wearing big woven shoes that tie onto their hooves, which seem to trip them up more than protect their feet. 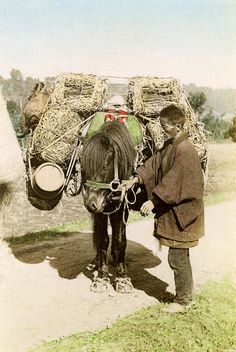 Still, she pushes on — and draws crowds wherever she goes.

“Fully 2000 people had assembled. After I was mounted, I was on the point of removing my Dollond* from the case, which hung on the saddle horn, when a regular stampede occurred, old and young running as fast as they possibly could, children being knocked down in haste of their elders. Ito said that they thought I was taking out a pistol to frighten them, and I made him explain what the object really was, for they are a gentle, harmless people, whom one would not annoy without sincere regret.

“In many European countries, and certainly in some parts of our own, a solitary lady-traveller in a foreign dress would be exposed to rudeness, insult, and extortion, if not actual danger; but I have not met with a single instance of incivility or real overcharge, and there is no rudeness even about the crowding.

“The mago** are anxious that I should not get wet or frightened, and very scrupulous in seeing all straps and loose things are safe at the end of the journey, and, instead of hanging about asking for gratuities, or stopping to drink and gossip, they quickly unload the horses, get a paper from the Transport Agent, and go home… They are so kind and courteous to each other, which is very pleasing. Ito is not pleasing or polite in his manner to me, but when he speaks to his own people he cannot free himself from the shackles of etiquette, and bows as profoundly and uses as many polite phrases as anybody else.”