We press on with Izzy Bird

Our Isabella has arrived in Nikko, a city so divine that it is said that a person who has not seen Nikko must never use the word “Kek’ko,” which loosely translates to splendid or delicious or beautiful. She goes on and on about the shrines and the plants and the manicured landscape — and having been to Japan, I could also go on and on about same. The places where people have spent 100s of years refining the natural world are breathtaking.

BUT. YOU GUYS. The most amazing thing about her stop in Nikko is that the house where she stayed is now a museum. It’s on the map and everything.

Isabella stayed in Nikko for a few days because she’d been warned that luxuries like flea-less bedding will cease once she leaves the city. While there, tho, she visits Irimichi (maybe Iramichi or Irimachi?) a nearby village. 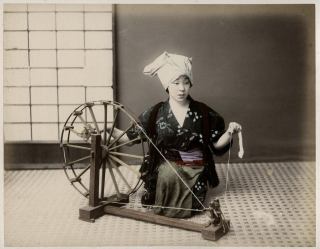 “In some [houses], the women are weaving, in others spinning cotton. Usually there are three or four together — the mother, the eldest son’s wife, and one to two unmarried girls. The girls marry at sixteen, and shortly these comely, rosy, wholesome-looking creatures pass into haggard, middle-aged women with vacant faces, owning to the blackening of the teeth and the removal of the eyebrows, which, if they do not follow betrothal, are resorted to on the birth of the first child.”

Boys don’t have it much easier, tonsorially. Because of a “hideous practice” of shaving their heads until they turn three, they all look top heavy. After that, the hair is allowed to grow in three tufts, one over each ear and one on the back of the neck. At ten, only the crown is shaved, and at 15, when the boy is officially a man, he wears his hear like one, which is super complicated and we’ll get there.

These village children, she observes, are beloved. “I’ve never saw people take so much delight in their offspring, carrying them about, or holding their hands in walking, watching and entering into their games, supplying them constantly with new toys, taking them to picnics and festivals, never being content without them, and treating other people’s children also with a suitable measure of affection and attention.”

Despite all of this care, the kids (and adults, frankly) are stricken with “repulsive maladies” like scabies, scald-head, ringworm, sore eyes, “unwholesome-looking eruptions” and smallpox scars.