Izzy Bird, all the plants

Isabella found the night too cold for good sleep and is back in the saddle early. The Ainu also were up at dawn to round all of the horses up, find the ones who aren’t saddle sore, and set out for the ride up the coast. The road is perfectly level for 13 miles. Isabella is feeling meditative and poetic, judging from this entry.

She spends the journey doing what most upper class women of the age did; she named all of the plants she saw. It’s a long list and includes: a dwarf rose, of a deep crimson colour, with orange, medlar-shaped hips*, as large as crabs, and corollas three inches across; a large rose-red convolvulus**; a blue campanula, with tiers of bells; a blue monkshood, Aconitum Japonicum; the flaunting Calystegia soldanella; purple asters; grass of Parnassus; and yellow lilies. There is also some kind of vine, remarkable only for its unique pistils and “most offensive carrion-like odour.”

After a tea break and change of horses, she is riding again when she realized she’d forgotten to ask if she had a “front horse,” that is, one who insists on being at the front of any horse train.*** “… just as we were going at full speed we came nearly up with the others, and my horse coming abruptly to a full stop, I went six feet over his head into the rose bushes. Ito looking back saw me tightening the saddle-girths, and I never divulged this escapade.”**** 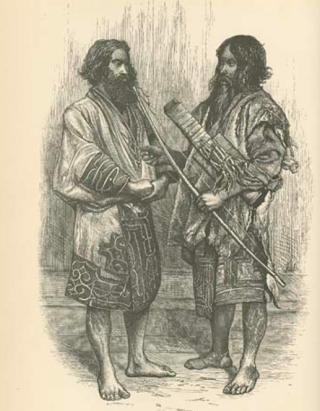 The Ainu in this part of the country scratch out a meagre living by producing fish oil, which means most of the place has a distinctive smell to it. At her evening stop, she went for a stroll to the shore, “and found open sheds much blackened, deserted huts of reeds, long sheds with a nearly insufferable odour from caldrons in which oil had been extracted from last year’s fish, two or three Ainu huts, and two or three grand-looking Ainu, clothing in skins, striding like ghosts over the sandbanks, a number of wolfish dogs, some log canoes or “dug outs,” the bones of a wrecked junk, a quantity of bleached drift-wood, a breach of dark-grey sand, and a tossing expanse of dark-grey ocean under a dull and windy sky.

“The deep boom of the surf was music, and the strange cries of sea birds, and the hoarse notes of the audacious black crows, were all harmonious, for nature, when left to herself, never produces discords either in sound or colour.”

*** for the record, I have a “front corgi” who has to lead any dog walk, despite the length of her legs.

A medlar is a fruit (in the rose family). From what I can see online, they’re yellowish and round. I’ve mostly read of them in old cookbooks. They’re generally eaten bletted (past ripe into squishy soft). No idea what they taste like, but bletted is a superb word, no?

A rose hip is what a rose bush forms after the rose. You frequently see red or orange ones on rose bushes in the fall.

And bletted is a wonderful word and I'll try to work it into casual conversation.

Like rose hips. They were cooked into a syrup and were used medicinally and as a somewhat tart and fragrant sauce.