Isabella is having a very good traveling day.

“Above all, I had a horse so good that he was always trying to run away, and galloped so lightly over the flowery grass that I rode the 17 miles here with great enjoyment. Truly a good horse, good ground to gallop on, and sunshine, make up the sum of enjoyable traveling.”

As is her habit, she noted all of the flora she passed, including: reedy grass as high as the horse’s ears, Ailanthus glandulosus (which was much riddled by the mountain silkworm), and the undergrowth of the familiar Pteris aquilina.

Tonight she is stopping a Japanese village, which she calls a colonization settlement, mainly of displaced samurai from a nearby province. Tomorrow she’ll go deeper into the mountains, which will be more Ainu than Japanese. 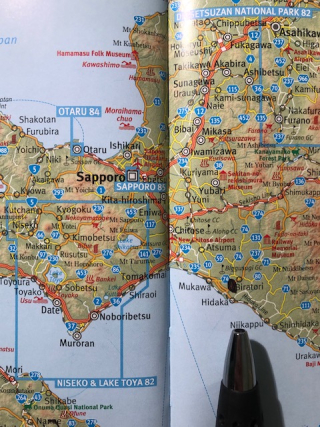 (I believe she is at the dot where my pen is pointing. Place names are a little sketchy in this stretch.)

Our Austrian/French friends Mr Von Siebold and Count Diesbach* have turned up in the same village and are returning from their trip to map rivers and drink claret. They were successful with one of those pursuits.

“They have suffered terribly from fleas, mosquitos, and general discomfort, and are much exhausted; but Mr Von S thinks that, in spite of all, a visit to the mountain Ainos** is worth the long journey. As I expected, they have completely failed in their explorations, and have been deserted by Lieutenant Kreitner. I asked Mr Von S to speak to Ito in Japanese about the importance of being kind and courteous to the Ainos whose hospitality I shall receive and Ito is very indignant at this. ‘Treat Ainos politely!’ he says; ‘they’re just dogs; not men,’” which just goes to show you how bad feelings about the native people you’ve displaced are standard across cultures.

** I just now realized that I’ve been spelling it “Ainu” and Bird’s been using “Aino.” I’m 99% certain it’s “Ainu” but it might have been one of those spellings that morphed over time. Bird also  flips between Eskimo and Eskimeaux, fwiw. Language is weird.