Izzy Bird, on to Hokkaido

After a muddy journey to Aomori, during which Isabella is flung from her kuruma and saved from being crushed by a wheel by her air-pillow*, she is ready to catch a ferry to Yezo**, which is on Hokkaido. Aomori is a “town of grey houses, grey roofs, and grey stones on roofs, build on a beach of grey sand, round a grey bay — a miserable-looking place, though the capital of the ken.” 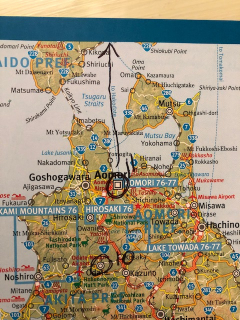 As she is boarding the ferry, three policemen demand her passport and travel papers. “For a moment, I wished them and the passport under the waves!”

Still, she makes it on the boat, which is a “little old paddleboat of about 70 tons, with no accommodation but a single cabin on deck. She was as clean and trim as a yacht, and like a yacht, totally unfit for bad weather.”

You know, of course, what’s coming.

They set sail under a brisk northerly breeze, “which chopped round to the south-east, and by 11 blew a gale; the sea ran high, the steamer labored and shipped several heavy seas, much water entered the cabin, the captain came below every half-hour, tapped the barometer, sipped some tea, offered me a lump of sugar, and made a face and a gesture indicative of bad weather, and we were buffeted about mercilessly till 4 a.m., when heavy rain came on and the gale fell temporarily with it.”

Isabella is so impressed by the Captain’s calm stoicness in the face of rough seas that she’s convinced he could be a Briton. 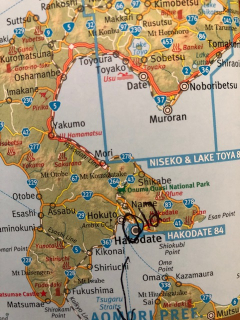 After landfall and finding the house a British couple in Tokyo invited her to stay in once she made it to the north, Isabella is “unfit to enter a civilised dwelling; my clothes, besides being soaked, were coated and splashed with mud to the top of my hat; my gloves and boots were finished, my mud-splashed baggage was soaked with salt water; but I feel a somewhat legitimate triumph at having conquered all obstacles, and having accomplished more than I intended to accomplish when I left Yedo.”

Here she sings the praises of the northern ocean ***, enjoys being in a more English house that has doors that lock and a real bed, and settles in to read the 23 letters from home that have finally caught up with her.

* “I escaped with nothing worse than having my clothes soaked with water and mud, which as I had to keep them on all night, might have given me a cold, but did not.”

** also known as Hakodate (for our purposes, anyway)

*** this is how I know Isabella and I are sisters in spirit. I could not care less about warm beaches with their soft sand. Give me rocks and wind and cold with my ocean and let me wonder in its fierceness.