When Isabella first hired Ito, she did so without a character reference, for reasons too arcane to go into. Ito told her that he was free to enter into her service. Ito also told Isabella that his previous master, Mr Maries, later asked him to continue on — but Ito said he “had a contract with a lady” and could not.

Which was both true and not-at-all true. Hence the scandal, if you can call a donnybrook about contract law a scandal.*

Mr Maries, as it turns out, is staying in the same house in Hakodate and he and Isabella decided to compare notes about Ito’s service. Turns out Mr Maries, who is on the island collecting botany samples, had a long-standing contract with Ito, who Mr Maries had trained to dry plants and collect seeds. Their contact paid $7 month and Ito bound himself to Mr Maires for as long as he was needed. But when Isabella offered Ito $12, he scampered off with her.

Isabella and Mr Maries (and Ito) agreed that Ito would return to his previous service once Isabella returned from the wilds of Hokkaido. Then Mr Maries*** will travel with his help to China and Formosa** for a year to continue collecting. As well that ends well, I guess. Ito seems to have responded to the whole thing with a shrug.

Isabella is preparing to pack up and head out — but first she had one last dinner at the British Consulate in the town. Also dining that evening were Count Diesbach, of the French Legation, Mr Von Siebold, of the Austrian Legation, and Lieutenant Kreitner, of the Austrian army. They are about to start their own journey into “the interior, intending to cross the sources of the rivers which fall into the sea on the southern coast and measure the heights of some of the mountains. They are ‘well found’ in food and claret, but take such a number of pack-ponies that I predict that they will fail, and that I, who have reduced my luggage to 45 lbs will succeed!”

She’s looking forward to starting off tomorrow. “A visit to the aborigines**** is sure to be full of novel and interesting experiences.” 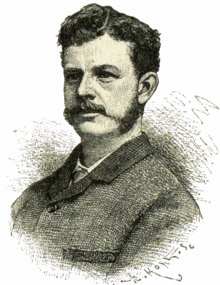 *** Mr Maries is likely Charles Maries (pictured) who is a botanist of note. Or, at least, interesting enough that he has a wikipedia entry.

**** the Ainu are this northern island’s native people and, like native people nearly everywhere, have been treated amazingly poorly by their invaders