Izzy Bird, waiting out the flood

Isabella has been confined in the small mountain village of Ikarigaseki for three days now and is weary of it. Those of us who are currently “safer at home” know this weariness all too well.

We, however, are warm, dry, and well-fed. She is none of those things.

Three times per day, Ito and others go to see how far the river has fallen. The short answer each time is “not enough.”

Isabella spends her time talking with the yodoya house-master and watching the cooking, spinning, and other “domestic processes” around her. She’s been lying on her cot, sewing, looking at maps, and reading the papers of the Asiatic Society, some of which survived the trip.

She’s also using her tubes and tins of zinc lotion to treat a number of residents who have eye infections, which is buying her the good will of the locals, who continue to bring her all manner of skin diseases for her inspection, “most of which would never have arisen had cleanliness of clothing and person been attended to. The absence of soap, the infrequency with which clothing is washed, and the absence of linen next to the skin*, cause various cutaneous diseases, which are aggravated by the bites and stings of insects.”

The kids in the town spend their time obeying their parents, flying kites, and learning lessons. School is closed right now because it’s a holiday and there’s a big flood but there will be tests when it reopens. Isabella admires two boys who have fastened paper carts to the backs of two beetles and are seeing how many grains of rice each can pull. You make your own fun, is what I’m saying.

Her “small stock of foreign food has been exhausted, and I have been living here on rice, cucumbers** and salt salmon — so salt that, after being boiled in two waters, it produces a most distressing thirst.”

She doesn’t have to worry about the thirst for too long because the salmon runs out quickly.
“I opened my last resort, a box of Brand’s meat lozenges,*** and found them a mass of moldiness.” For the foreseeable future, it’s just rice and cucumbers as far as the eye can see.

At the end of this entry, she’s certain they’ll leave tomorrow.

* The absence of “linen next to the skin” is a big no-no in her book. It comes up frequently.

*** They are “A meal in the vest pocket” according to this WWI-era ad. 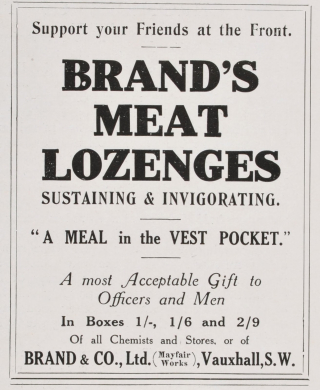