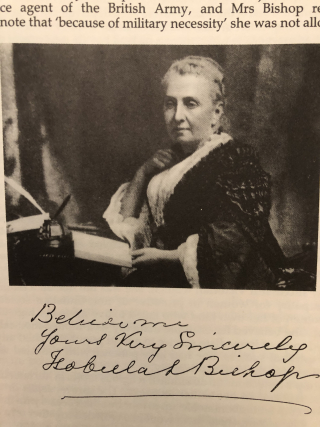 I promised the start of a new adventure — this one will involve the man who was likely the one true love of Isabella’s life* — but I want to take a quick detour first. This will a) give me a little more time to read further ahead and b) helps round out Our Isabella a little more.

One of the books that rekindled interest in Bird briefly was Cicely Falser Havely’s** This Grand Beyond. It’s a compilation of the best bits of Bird’s books, which is interesting enough. What I found more compelling was Falser Havely’s introduction. It does a great job of putting Bird in context.

“No one ever seems to have told Miss Bird that what she wanted to do was too dangerous for a woman. Nor, of course, was she the sole example of her kind. We think of middle-class Victorian women as living in some kind of purdah, but some of those who managed to escape were able to enjoy an enviable degree of freedom which may in part have been due to the very notions of sexual propriety that tended to keep the majority respectably at home.”

And that's one of the parts of Isabella's story I find most interesting. We think of women’s lives as incredibly constrained in all of the years before we get to, like, 1968. But that's not true.*** Women’s autonomy waxes and wanes throughout the centuries, just like everything else. In Jane Austen's times, certain classes women were free to wander the countryside (even with men) with little social scandal. By Victorian times, this would never have been done. Like any progress, it looks like a series of stair steps rather than a smooth, upward arc.

“Rare though it then was, Isabella Bird's freedom to share with men companionably the pursuits traditionally reserved for men alone became for decades after her time not less but far more difficult for a woman to achieve,” Falser Havely writes.

The standards for acceptance changed during Bird’s time, too, just in the span of a few years. In 1890, she the first women awarded a Fellowship in the Royal Scottish Geographical Society. In 1892, she was one of the first women elected a Fellow in the Royal Geographic Society. Then, by 1893, the Society decided it had too many women and met to remove them all. Her acceptance was always conditional, which is familiar to those who aren't white and male no matter when they lived.

** also British but a modern scholar.