Izzy Bird, just taking it all in

#52
Because Isabella is in a beautiful part of the country and in a mood to capture it all in a letter, I’m going to let her words do the work.
“It was a heavenly morning. The deep blue sky was perfectly unclouded, a blue sea with a diamond flash and a ‘many twinkling smile’ rippled gently on the golden sands of the the lovely little bay, and opposite, 40 miles away, the pink summit of the volcano of Komono-taki, forming the south-western point of Volcano Bay, rose into a softening veil of tender blue haze. As the day began, so it closed. I should like to have detained each hour as it passed. It was thorough enjoyment. I visited a good many of the Mororan Ainus, saw their well-grown bear in its cage*, and, tearing myself away with difficulty at noon, crossed a steep hill and wood of scrub oak, and then followed a trail which runs on the amber sands close to the sea, crosses several small streams, the ocean always on the left and wooded ranges on the right.
“Usu is a dream of beauty and peace. There is not much difference between the height of high and low water on this coast, and the lake-like illusion would have been perfect had it not been that the rocks were tinged with gold for a foot or so above the sea be a delicate species of fucus.** In the exquisite inlet where I spent the night, trees and trailers drooped into the water and were mirrored in it, their green heavy shadows lying sharp against the sunset gold and pink of the rest of the bay…
“In spite of Ito’s remonstrances and his protestations that an exceptionally good supper would be spoiled, I left my rat-haunted room, with its tarnished gilding and precarious fusuma, to get to the last of the pink and lemon-colored glory, going up the staircase in the stone-faced embankment, and up a broad, well-paved avenue, to a large temple, within whose open door I sat for some time absolutely alone, and in a wonderful stillness; for the sweet-toned bell which vainly chimes for vespers amidst this bear-worshipping population had ceased.”
I know. I want to go there, too.***
* Like one does.
** photo attached. 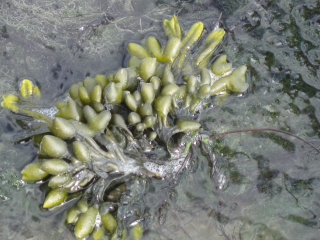 *** while I was scouting around for pictures (and found none that fit, really), I found this and can now think of nothing else.