Izzy Bird, of course there is

Isabella is sailing from Hakodate to Yokohama. It should have taken 50 hours. It took five days. 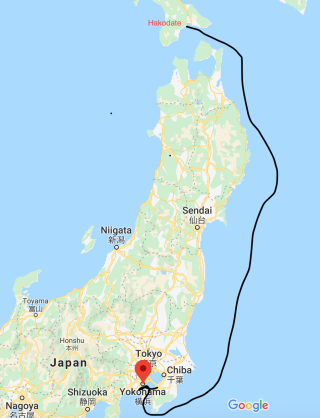 The first two days, Isabella and her two fellow British travelers stayed in their cabins and were tossed around by the sea. On the day they emerged, a “great heat came on with suffocating closeness, the mercury rose to 85 degrees, and we encountered a ‘typhoon,’ otherwise a ‘cyclone,’ otherwise a ‘revolving hurricane,’ which lasted for 25 hours and ‘jettisoned’ the cargo.”*

The captain drew a diagram of the storm for Isabella and showed all of his attempts to avoid the worst of it, to varying degrees of success. Once it passed, the typhoon was followed by dense fog. Because of course it did.

When they finally land in Yokohama, they are greeted with destruction, which you’d imagine would happen if a 19th century town was hit by a typhoon. The railway is flooded and the the rice crop is likely ruined. Once train travel is possible again, Isabella heads to Tokyo and settles in for a period of “rest and ease” under Mr Wilkinson’s roof**.

“The afternoon was bright and sunny, and Tokyo was looking its best. The long lines of yashikis*** looked handsome, the castle moat was so full of the gigantic leaves of the lotus that the water was hardly visible, the grass embankments of the upper moat were a brilliant green, the pines on their summits stood out boldly against the clear sky, the hill on which the legation stands looked dry and cheerful, and, better than all, I had a most kindly welcome from those who have made this house my home in a strange land.”

* I feel like “jettisoned the cargo” should be code for something but know not what.

** We met him when she was outbound.