a touchstone for tough times

I ran the trifecta of the modern writer's bucket list during the week Somebody's Gotta Do It came out. There was a New York Times review. I was made into a meme. And Hillary Clinton tweeted about my work. It would have been enough.

But there is more to the story. I've not told it because a) I can't quite believe it happened and b) it felt too tender and personal to share. However, now is the time.

After the tweet, a little bird at the publisher's office told me that HRC herself would like an autographed copy. With it, the wee avian suggested, toss in a personal note and something small from your region, because she really loves this part of the state. Which is what I did, after 48 hours of agonizing about what to say and what to send. Like one does.

Then a pandemic happened. It's the same one that continues to happen so we have that, at least, because a new pandemic on top of this one might break me. While I have had more than a few moments where I wonder what the sales numbers on my book would look like if the momentum of the first week wasn't interrupted by chaos and death, most of my mind has been on much more important things, not the least of which was what was happening on the county government level. It has been ... rough.

About a month ago, my Elder Teenager yelled up the stairs that a letter for the "Honorable Adrienne Martini" was in the pile of mail on the table. I assumed it was from someone who wanted to let me know that I was going to hell or a worthless shill for "King Cuomo" or the like. I get these often enough that they no longer phase me. I also don't rush to open them.

Oddly, all three of the other humans who live in the house were downstairs when I opened the letter. Those same humans also got to hear the string of very adult words I said when I realized who the letter was from: 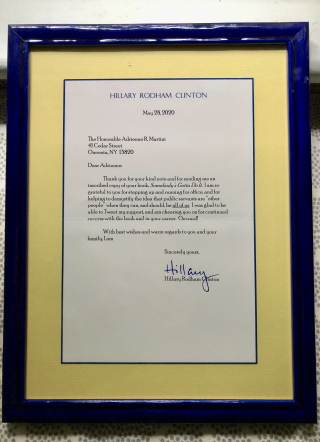 It just came back from Artware in Oneonta, the best frame shop in the region. I don't know where I will hang it but need it to be somewhere I'll see it when the work is feeling harder than usual and I've convinced myself none of it is worth all of the aggravation.

This is a big deal. Kinda like you. Congratulations!!!!

That is FANTASTIC! SO. COOL. You rock star. CONGRATULATIONS! (and beautiful framing)

Thanks to both of you! And the local framestore does a GREAT job.