Izzy Bird, into the West

She has just visited the Sandwich Islands (a.k.a. Hawaii) and decides to see the American west on her way back to England. That collection of letters home is called “A Lady’s Life in the Rocky Mountains” and was first published in 1879.

The first entry is from Lake Tahoe - but her trip starts in San Francisco. 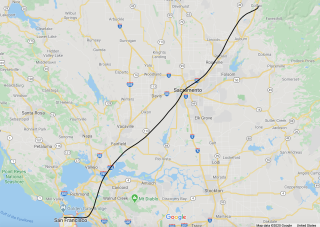 “I left in the cold morning fog early yesterday, driving to the Oakland ferry through streets with sidewalks heaped with thousands of cantaloupe and water-melons, tomatoes, cucumbers, squashes, pears, grapes, peaches, apricots* — all of a startling size compared with any I ever saw before…California is a ‘land flowing with milk and honey.’”

As much as she rhapsodizes about the state of the produce and the “at cattle, gorged almost to repletion,” she is decidedly not in love with Sacramento,** which she sees from the train west.

Soon enough, they are in the Sierras. “The dusty fertility was all left behind, the country became rocky and gravelly, and deeply scored by streams bearing the muddy wash of the mountain gold mines down to the muddier Sacramento.”

At the Colfax stop, she walks the length of the train to stretch her legs. Two engines with their “respective tenders loaded with logs of wood,” then a baggage car loaded with bullion and valuable parcels and guarded by two “express agents.” Then cars loaded with preached and grapes, then two “silver palace” cars***, a smoking car “full of Chinamen;” the five plain old passenger cars.

As for the rest of the passengers…

* and a partridge in a pear tree

*** These are luxury and/or private train cars that were extra swank. Allegedly, Amtrak will still let the well-heeled attach their own cars to a train, should they so choose. Which seems like a great way to travel, frankly.****

**** Scott and I once took the train from Austin to Chicago to Pittsburgh. I don’t recommend going South to North in July if you like a view that changes. It went from brown to green but remained more or less the same. *****