After the horses are found, Isabella saddles up. They continue trying to find the trail to Estes Park.*

After four fruitless hours, Chalmers goes off in search of the trail he just knows is there. He “returned rejoicing… soon, sure enough, we were on a well-defined old trail, evidently made by carcasses which have been dragged along by hunters. Vainly, I pointed out to him that we were going north-east when we should have gone south-west, and that we were ascending instead of descending.** ‘Oh, it’s all right, and we shall soon come to water,’ he always replied. For two hours we ascended slowly through a thicket of aspen, the cold continually intensifying; but the trail, which had been growing fainter, died out, and an opening showed the opening of Storm Peak not far off and not much above us, though it is 11,000 feet high. I could not help laughing… His wife sat on the ground and cried bitterly.” 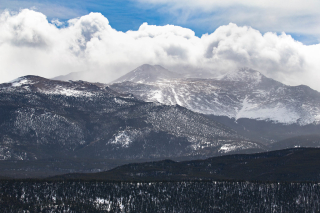 So they turn around. Mrs C is thrown from her horse, which is followed by the mule’s girth strap breaking (which flings their supplies everywhere), which is followed by Mrs C’s girth strap breaking, which flung her to the ground again. At the outlet of the trail, they start a fire, have some bacon and bread, and spend two hours searching for water. What they find is a muddle that has been “trodden and defiled by hundred of feet of elk, bears, cats, deer , and other beasts, and containing only a few gallons of water thick as pea soup, with which we watered our animals and made some strong tea.”

Thus fortified, they trudged four hours back to the Chalmers’ cabin.

“Yet, after all,” Isabella sums up, “they were not bad souls; and though he failed so grotesquely, he did his incompetent best.”

* Spoiler: they do not find it.

** Those who grew up in Pittsburgh will recognize this method of navigation.

I’m beginning to feel more and more sorry for Mrs. C, who’s saddled with this incompetent guy. How on earth does the C family survive?

Right? I'm not sure how they are making it - but suspect their sheer stubbornness is helping.