Caryl Churchill is one of my favorite playwrights - but I didn’t make the connection between her groundbreaking 1982 play Top Girls and Isabella Bird until my agent mentioned it. And, well, there it is, right in the first act.
Marlene, a career focused British woman,* hosts a dinner party with five notable historic women: Lady Nijo, a Japanese courtesan turned nun from the 13th century; Dull Gret, the subject of a Brueghel paining (below); Pope Joan, a female pope in 854-856**; Patient Griselda, the obedient wife in The Canterbury Tales; and Our Isabella. 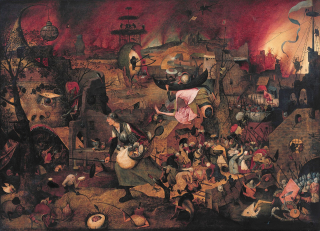 In the Metheun Drama edition of the play, there’s a wonderful, many-paged introduction that puts the work in context for students who may not know and/or remember what the early 1980s were like. I am one of those, mind. I was all of 9 and was only vaguely aware of Margaret Thatcher, much less all of the politics around feminism and work.
The bit that I find most interesting:
“[Marlene] rejects the ties of blood relationships and situates herself against a backdrop of significant and notable women, many of whom have nonetheless received little historical or critical attention. Crucially, Churchill does not choose the more famous women from history, legend, or literature to people this scene: No Queen Elizabeth I or Victoria, Boudica, Lady Macbeth, or Cleopatra. She chooses women who have been all but forgotten to those without a specialist interest in their stories.In doing so, she participates in a feminist practice known as “herstory:” the reclamation of important but largely forgotten women and assertion that their stories are as important as the figures that fill the pages of traditional, male-authored history books.”***
The National Theatre did a revival of Top Girls in 2019. Sadly, it’s not one that they are releasing online this summer. That would have “slapped,” as my eldest child says. Instead, here’s the poster art, which is lovely.

* Remember: this was the early 1980s and feels like more than 40 years ago.
** She gave the game away when she gave birth.
*** for nerds of a similar bent: this pieces very good, too.