Isabella is in Truckee, which she has heard spoken of as a “rough lumbering town.” I will let those who know this town either confirm or deny.* 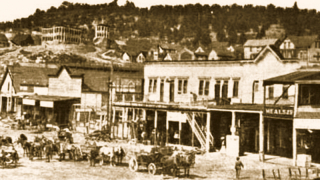 She arrives “much dazed” and “very stupid with sleep” and presents herself to a “rough Western hotel.” The public rooms are full of groups men drinking and gossiping around the fire. The “unholy sound of tom-toms was not far off. Mountains seemed to wall in the town, and great pines stood out, sharp and clear cut, against a sky in which moon and stars were shining frostily.”

And, now, another word that 100 percent proves that Isabella was a woman of her time, which is only a few years after the Civil War. Brace for impact.

“It was a sharp frost at that great height, and when an ‘irrepressible n——-,’ who seemed to represent the hotel establishment, deposited me and my carpetbag in a room which answered for ‘the parlour.’”

It’s less surprising if you’ve seen the HBO series Deadwood, which is set at about the same time.** I can not picture Isabella using some of the other, more anatomically evocative words in the series, mind.

I have nothing profound to add here.

Another man comes in to let Isabella know that he will try to get her a room but, because they are nearly full up, it will be a poor one. It is 11:30 p.m. and she hasn’t eaten since 6 a.m. She asked hopefully for a hot supper but no luck. He did return a half hour later with “a small cup of cold, weak tea, and a small slice of bread, which looked as if it had been much handled.”

While she waits, she learns that most rooms in the town are rented out to many men simultaneously. They then sleep in shifts, because mining and timber are 24-hour operations. “Consequently, I found the bed and room allotted to me quite tumbled looking. There was no window to the outer air, but I slept soundly, being only once awoke by an increase of the same din in which I had fallen asleep, varied by three pistol shots fired in rapid succession.”

* In my brain, Truckee is one of those mountain towns full of ultra runners and libertarians who manage to get along quite well. Am I close?

** Ian McShane is magnificent, as is most of the rest of the cast. The writing is a wonder, too.