Izzy Bird, the cut of his jib

Isabella has written an account of ascending Long’s Peak. The trip to three days and she is “much disinclined to write it, especially as no sort of description within my powers could enable another to realize the glorious sublimity, the majestic solitude, and the unspeakable awfulness and fascination of the scenes.”

Long’s Peak, 14,700 feet high, is called the American Matterhorn and had only truly been summited five years previous to Isabella’s arrival. Ever person she’s encountered in Estes Park has told her that it is far too late in the year to even attempt such a thing. And, yet, when Mountain Jim comes in and offers to guide her,* Isabella jumps at the chance. Mrs Edwards** bakes bread to last three days, “steaks were cut from the steer which hangs up conveniently, and tea, sugar, and butter were benevolently added.”

Isabella spends some time discussing Jim’s appearance. He “was a shocking figure; he had on an old pair of high boots, with a baggy pair of old trousers made of deer hide, held on by an old scarf tucked into them;*** a leather shirt, with three or four unbuttoned waistcoats over it; an old smashed wideawake, from under which his tawny, neglected ringlets hung; and with his one eye; his one long spur, his knife in his belt, his revolver in his waistcoat pocket, his saddle covered with an old beaver skin, from which the paws hung down…**** … he was as awful-looking a ruffian as one could see.” 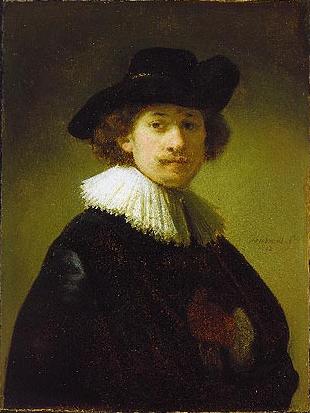 (pictured is Rembrandt in his wideawake hat.)

Thus packed and ready, they rode out and up.

“… up a steep pine-clothed hill, down to a small valley, rich in fine, sun-cured hay about 18 inches high, and enclosed by high mountains whose deepest hollow contains a lily-covered lake fitly names ‘The Lake of the Lilies.’ Ah, how magical its beauty was, as it slept in silence, while THRE the dark pines were mirrored motionless in its pale gold, and HERE the great white lily cups and dark green leaved rested on the amethyst-colored water.”

* the two young men who accompanied her to Estes Park also came along so there was no funny business.

** the woman of the house, I think, but not married to Evans? This is confusing.

*** anyone else get a Steven Tyler vibe? Just me, then?

**** she goes on in her description for a bit. It’s like her listing of every type of tree but with describing a dude.