now known as the Teen

One of the awesome things about having older kids is how little maintenance sleep-overs and other sorts of playdates require. Generally, the Husband and I are only needed for rides, snacks, and/or money. Or, likely, all three. So the Teen's birthday sleep-over was pretty low-impact for us.

There was, of course, cake*: 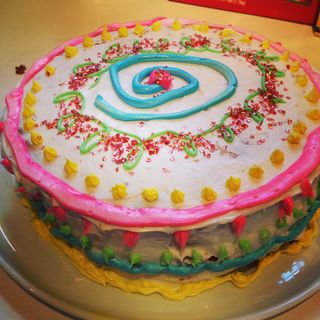 Which had been decorated by the Teen and her friend. Said friend brought edible glitter as a birthday present. 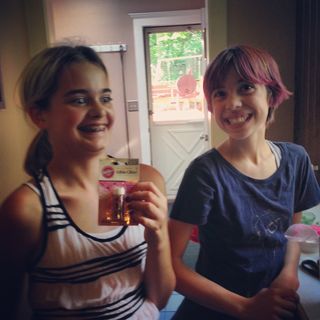 It was well received.

The Teens went roller skating, then came back and crashed in our front room. The next morning, Lucy decided to wait for them to come out to play. 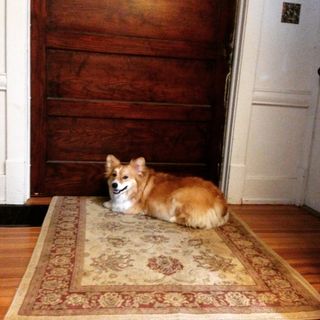 She waited a long time because Teens are not known for early rising. After all of the bonus kids took off for their respective homes, it was time for family gifts, which included a ukulele and a subscription to Japancrate: 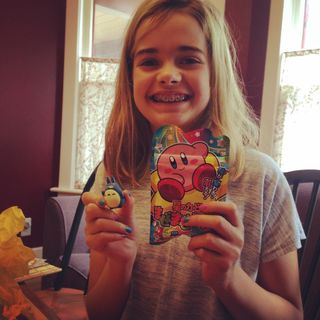 It might have been the gift winner this year. So much kawaii.

Add to that a nearly 14-mile run, by me, not the Teen, and that is pretty much the weekend that was. Hope yours was also as lovely, if slightly less exhausting.

* Gluten free, because the Teen has (and will always have) Celiac Disease. King Arthur's really does make the best GF mixes.

so many things in common

I make no apologies about my love for Jon Stewart. There's so much I'd love to just sit and talk with him about, because I think it would be great good fun. But what I didn't know was that our kids have somethig in common: Celiac Disease.

My daughter's experience was similar to his son's -- lots of vomit, anemia, general malaise, and wasting away. When she was 3, we watched her fade before our eyes. Where the experience differs, however, is in how quickly the Tween was diagnosed. Our peditrician at the time caught it in a flash. It sounds like Stewart's ordeal went on much longer.

The interview is here. It's technically more about Jennifer Esposito's book but, as with most good interviews, it wanders a little.

baking with the diva

Somehow, I met yesterday's deadlines. I'm stunned, too. But let's all keep our fingers crossed for no more snow/ice events. Mama needs some spring, already.

Which is why Maddy and I made gluten-free sugar cookies this weekend.*

I found a box of Cherrybrook Kitchen's Sugar Cookie Mix in the recessed of the pantry. We followed the directions -- but used real butter and cow's milk rather than margarine and soy milk. Those two items would have required a trip to the store, which was more than we could commit to.

We also rolled the balls in fancy sugar that also happened to be in the pantry: 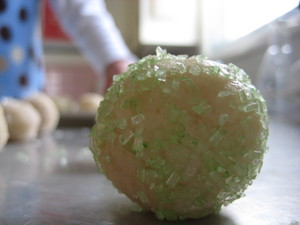 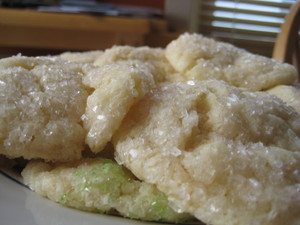 As far as cookies go, I wish I would have cooked them longer. But I couldn't stand to hear "Are the cookies done yet" one more time.

As far as GF cookies go, well, the dough had that weird grit that can plague mixes with rice flour.** The crunchy sugar on the outside covers it up OK but it's still noticeable. The cookies also lacked structural integrity, which might have been a result of pulling them too soon. Hard to say. Overall, they were OK, in my opinion. The Diva loved them, though.

Next up on the sugar cookie front will be the Gluten-Free Girl's recipe.

* No, we didn't *really* make them because we need spring; it was just a good segue. They are covered in spring-themed sugar, which ought to count for something.

** Does anyone know of a super-duper finely milled rice flour that isn't sandy?

I know that I haven't been talking much about the Diva's Celiac disease as of late. This is a good turn of events. I seem too only talk about things that are causing some kind of emotional upheaval. Managing her, as matthew puts it, "self-hating small intestine," is something we do out of routine anymore. Given how quickly she's been growing and how generally healthy she's become, we are doing well.

Still, things sneak up on us. I've gotten blase about reading labels on foods that shouldn't contain gluten in the first place. Like in chicken broth. Or tomato soup. Or butterscotch chips. In every case, the discovery came as I was throwing the package out after putting the contents in something I was about to feed to her. In the case of the butterscotch chips, I also had to throw out a batch of frozen mini-cheesecakes* I'd tossed them in.

Yes, I know, my vigilance should be constant. Yes, yes, I could get around all of this by making every last thing from scratch. But, really, who has time to do this? While we don't eat that many packaged foods, we do eat some. Labeling laws have greatly improved, though, which makes it pretty dang easy to find the gluten --- if you can remember to check in the first place.

With the chicken broth (College Inn has gluten) and the soup (Campbell's does too), it was easy enough to find another brand. Not so much on the butterscotch chips but it's also not that big of an issue. The Diva's diet mostly consists of food in their natural states. Partly, this is because of the Celiac but, mostly, this is because she's a preschooler. Complicated food will be shunned, regardless of whether or not its gluten free.

*the mini-cheesecakes are one of her favorite treats and the thing we bring in when a kid in her class has a birthday. Essentially, the mini-cheesecakes, which I make in a muffin tin, are cream cheese, eggs, sugar and vanilla. If we're feeling kicky, we fling on some colored sugars or chocolate chips. I keep a bag of the 'cakes in the freezer, where they will happily sit until some kind of event calls for one. The Diva like them more than she ever liked cake, frankly.

god (of your choice) bless the internets

picture stolen from Austinist.com and explained below.

The great thing about the Diva having celiac now as opposed to ten years ago is that there is so much more information out there currently. I have been reading about what parents when through to get diagnoses then and thank my lucky cliched stars that our path has been much, much easier. I'm still trying to wrap my head around the fact that in five weeks we went from me pointing out my kid's big belly to her pediatrician to an official proclamation.

The amount of info is also the bad thing about the Diva having celiac now -- but it's the kind of downside I like to have. Still.

So far, I've found some great books, which are perfect for a global view. Thanks to a delivery from my friend the book fairy, I have been reading Danna Korn's Kids with Celiac, which has been recommended by pretty much everyone. It's haunting and oddly reassuring to see pictures of pre-diagnosis kids who look exactly like mine did. I don't agree with her advice on everything -- there's a bit of misdirection that she recommends for younger kids that won't work in our life for a variety of reasons -- but it is a great resource.

Also a great resource are Bette Hagman's cookbooks. I made her GF flour mix and the Dutch Babies last night. While cooking with non-wheat flours is going to take some getting used to -- I kept expecting the batter to do things that it was ill-equipped to do -- the result was a success. Needs some tinking, of course, but everyone snarfed it down. I suspect that one advantage I have going in to this is that I already have become a fairly good home cook and don't rely that much on pre-packaged stuff. This may kick me in the ass later.

For the Diva, the best book has been Eating Gluten-free with Emily. I'll catch her just flipping through it whenever she is in her room and she keeps asking to have it read to her. A good sign.

There have been some tantrums, of course. She's a kid dealing with a new regime. We carry on.

And on the bless the internet tip, there are some great sites, which are perfect for a personal view. I'm digging Gluten-Free Girl, whose promo spot was on the Food Network at just the right time, so much so it felt a little like some weird fate's finger thing. Her site led me to the Celiac Chicks, who make me wish we lived in the city and could hang out. Since I don't and we can't, I will do the next best thing, which is take the Diva to Babycakes next time she's with me on one of my NYC trips.

For those of you who don't give a rip about gluten or my kid's issues with same, two other links for your amusement: the nun themed coffee bar I wish I'd made it to in Austin and those pop watch guys want help choosing Katie Couric's new catchphrase. I'm voting for "Whoop, there it is."