"Someone's gotta be last. [Being last] doesn't bother me a bit. Eventually, everyone slows down. I think those guys who quit instead of dealing with getting slower are weenies. That's what I call them. I'll sacrifice my race if I see someone struggling. I'll slow down and we'll run together. Not so much with me -- they're macho and don't appreciate it -- but I'll slow down and help women if I see them struggling. Everybody needs help sometimes to get through it, and I don't look down on anyone who shows up for a race. I'll be 83 in August. I'm vertical, I'm ambulatory, my peepers are open, so I'd say I'm on top of the pile. If I have to stop running, I'll do what I hate doing: walk. But I won't quit."

the last CSA update (for now)

Given that our evening temps are now in the 30s, it seems that the CSA closed up just in time. In the last batch were two new treats. 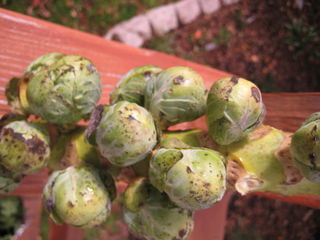 Brussels sprouts, which cleaned up much nicer than they appear and are one of my favorite veggies ever. On a food-related note: the Pie Goddess and I were arguing about the merits of fresh coconut. She believes that it tastes/has a texture like almonds. I think there is no way that the two could ever be confused. What do you think, dear reader?

ETA: There seems to be some blog weirdness in terms of load time, etc. Will look into it.

I can't seem to get the hang of Wednesdays. So, quickly, this week's CSA bag was full of a lot of the same stuff that was in other bags -- kale, potatoes, various lettucey greens, carrots. But then there were these: 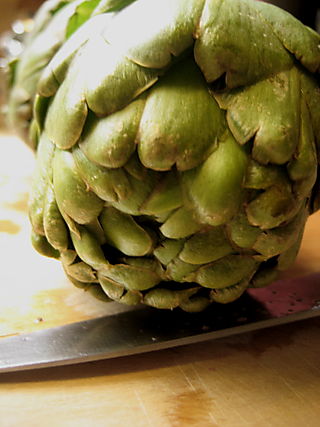 I handed them off to the Pie Goddess, who'll have to comment on the quality of the 'chokes. While I think artichokes are one of the prettier veggies on the planet, I don't care to eat them. Weird, I know.

Also, more beets, which I will eat in massive quantities. 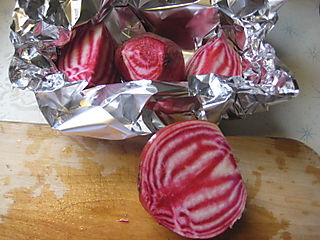 This coming weekend marks the end of the CSA. Our growing season is rapidly becoming too cold for life season. We have, however, committed to buying parts of one of the CSA pigs (including some bacon, the tastiest part) so there will be more "eat the view" news even after everything green dies.

When I unpacked the CSA bag on Saturday, I found something long and maroon bundled with two carrots, which makes perfect sense because it was, indeed, a carrot as well. Pretty, no? 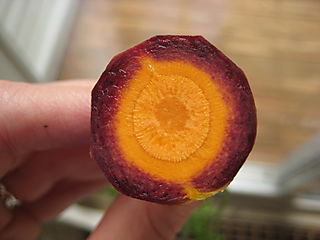 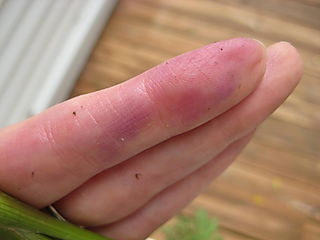 As for the taste, eh. These were woody and a little bit bitter. Dunno if that was just this particular carrot or all Aggie-loving carrots. This kids -- especially the Dude -- really loved them, tho.

As for the rest of the produce, I used most of it for corn chowder, with CSA potatoes, CSA celery and local corn. The only thing that wasn't locally grown was the dairy. How hard would it be to start a CSA dairy?  I would even volunteer to churn or milk or whatever it is one does with cows in exchange for some local butter. 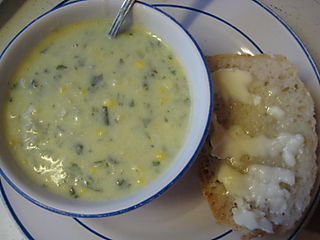 The chowder is gluten free, even though the Diva refused to touch it. The bread is not GF and is Alton Brown's no-knead recipe, which I find much tastier than Bittman's. YMMV.

So in last week's CSA basket, there were two somethings that looked suspiciously like yellow tomatoes. 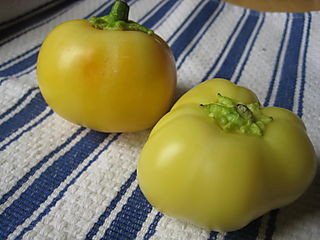 Closer inspection -- and warning from the Pie Goddess who discovered their true nature when she hacked one up for a salad -- revealed that they are cheese peppers. 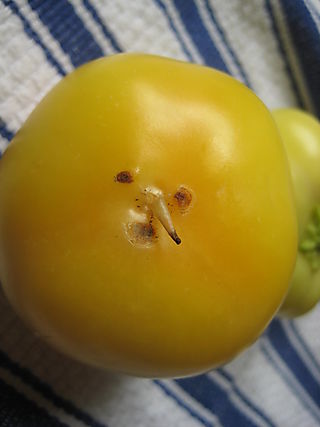 To my palate, they tasted like your standard green pepper -- but were too small (between a golf ball and a baseball) to stuff, which is the best use for a bell pepper that I know of. So I made chili, using said peppers, onions and a carrot from the same CSA box. I also whipped up some polenta, which I chilled, cut into nuggets and pan-fried. Yum.

Also for the domestic goddess file, I've started a new knitting project. When I was in Toronto, I met up with one Amy Singer, who had some test skeins of a colorway she is designing.* While we chatted, I knitted a swatch out of one** of them so that we could all see what it looked like as a fabric, rather than as a skein. Amy gave me two of the test skeins for my home knitting pleasure. And a pleasure it has been. 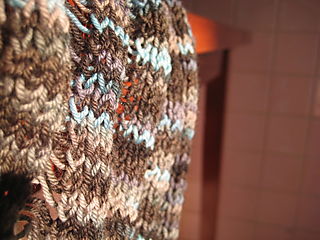 So what do you make when you have two skeins that only sorta match each other in a colorway designed by the knitter behind Knitty? 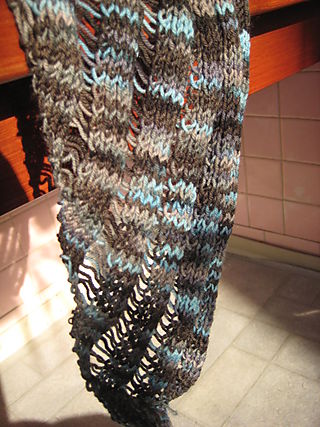 A lightweight Clapotis, of course.

* I'm not sure how much I'm allowed to reveal.  I'll add more details when there is a big reveal.

** Three other knitters knit swatches that night, too. I don't want to make it sound like I was hogging all of the yarn love. Not that I wouldn't have.

I've been remiss with the csa updates. Sorry about that.

If you find yourself in possession of a lot of yellow squash, this cheesy casserole is a great use for them. I'd show you a picture but it was consumed by the time I remembered my camera.

In other news, time for another book-related road trip, this one to a far off land that requires that I find my passport. Well, not requires but I get so much of a thrill out of having my passport stamped, I'm bringing it anyway.

Any guesses where I am off to?

I'll preload stuff, including a knitting debacle (with pictures) because sometimes I am not very observant.

A PS: You know how sometimes you just wake up in an inexplicably bleak mood? I can't be the only one who does that, right? Today is that day -- but this squirrel post at Cute Overload! made everything much better. Still inexplicably bleak, of course, but with occasional giggles.

Tomorrow I shall be off to the big city to do some interviews for the sweater book. I will also be visiting with random folk, several of whom aren't knitters. So, a little business and little fun.

But today requires running about. So, briefly, this week's CSA bag was the mother-load, complete with a dead ripe cantaloupe (technically a muskmelon), green pepper, more zucchini and yellow squash, spinach, carrots, tomatoes and an onion. There was more, I suspect, but a fair amount has been consumed already and my memory is short.

The eggplant saga ended with me giving up and giving the noxious fruit to Doula K, who loves them. I appreciate all of the ideas, tho, even if I couldn't work up the courage to try them. Next time, maybe.

In search of more recipes for produce, I picked up a copy of Barbara Kafka's Vegetable Love at the library. Do not do this. The two recipes that I tried -- Cauliflower Au Gratin and Focaccia -- weren't a) good or b) well copy edited. While I should have listened to my instincts on the focaccia, which told me that 2 Tablespoons of salt was waaaaaaay too much, I'm still not such what was up with the ratio of veg to cheese sauce on the gratin. I hate to tar the whole book based on two recipes but, well, no I don't. I'm tarring the whole book.

I'm now putting zucchini in places one wouldn't think it should go. 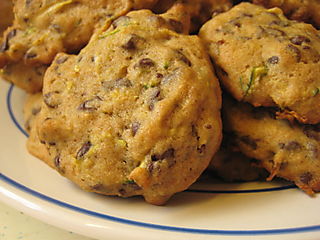 The Spouse was skeptical. Hell, I was skeptical. We should not have been because they are yummy. Next up are loaves of zucchini bread, most of which I'll freeze so that we'll have them in the dead of winter and dream of these long, warm days.

Also from the CSA, cauliflower and chioggia beets, which I roasted ... ... and served with risotto, which I finally got right, and random greens. 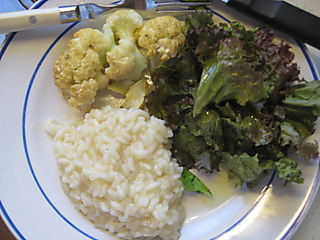 (There are no beets in this picture because I ate mine standing up in the kitchen. It tasted like candy and I just couldn't help nibbling at it while I sliced one up for the Boy.)

Also in this week's bag was my bete noir: 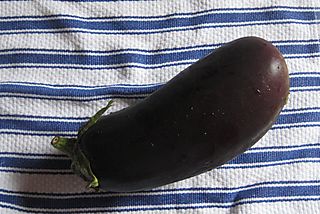 I have yet to meet an eggplant I like. My aversion to eggplant, I think, is largely one of texture, not taste. Scott suggests we bread it and deep fry it, which is his solution to most things. Anyone else care to weigh in?

Tonight I will use up the rest of the kale and chard in a pasta sauce.

Gratuitous Trout, who will not also be tossed in the pasta sauce: 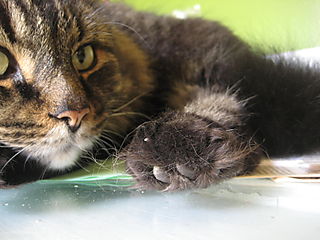 * recipe is about halfway down the page.

And some weeks, there's zucchini. 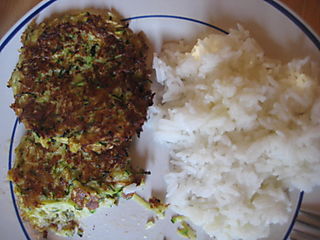 Fritters a la the Pioneer Woman. Good -- although I wish I'd added more cheese. Next time.

Other than that, lots of greens, shell peas and more kale. Oh, the kale. Anyone have any exciting suggestions for three or four leaves of kale?

Based on this recipe from the Cleaner Plate Club, I made soup: 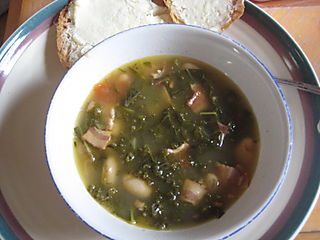 Only instead of prosciutto, I used bacon. And rather than garlic, I used garlic scapes. And rather than escarole, I used kale. Because those were the things I had on hand. Other than that, it was exactly the same. It was very, very good.

Because I was offloading the camera - this is a picture of how I spent a brief part my 4th of July. Maddy was giving me a foot massage while Cory jumped up and down on my back. It was very...soothing. 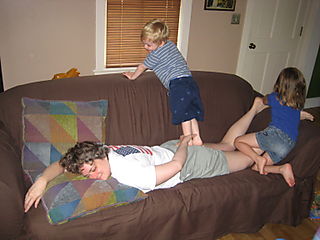 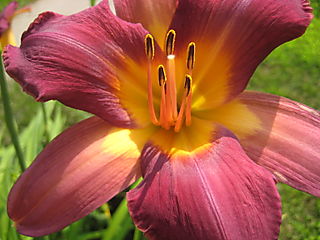