so that was a hoot and a half

I'm gonna hold the "many things" post for next Tuesday, largely because it isn't many things if your list only has one thing on it. And one thing doesn't really make a post.

Houston tends to be the butt of jokes when one lives in Austin. "Jokes" is the wrong word. It's more that Houston is used as a worst case scenario, like "if you think you've had a bad day, you could have had it in Houston, which would be much, much worse."**

I made the mistake of incorporating that into my worldview. I am here to say that I was full of cow pies. Houston is delightful.

Look at these knitters: 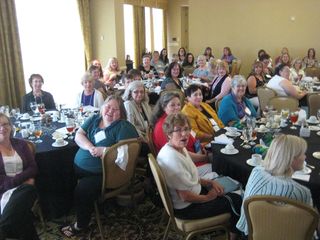 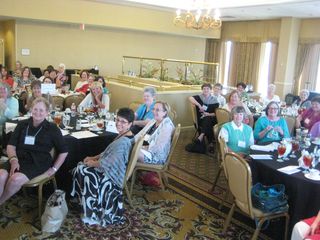 And there was a bunch in the middle, who I didn't realize didn't get in either shot. They were equally lovely.

From my perspective, the talk went well. There was laughing and questions. Plus, there were cupcakes. It's always more fun with cupcakes.

In between, I ate as much Tex-Mex as I could hold. I had at least one Shiner Bock, which I pine for, and an obscenely big (and obscenely delicious) watermelon margarita. 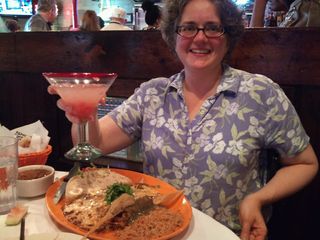 Marilee, Brine, Roddie, Theresa (who took the picture above), Dianna, Mary Lee, Anna Marie and all of the Knit at Night Knitters were most wonderful.

Plus, there was yarn. 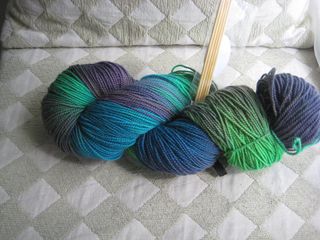 It's a colorway (named "Jane" in memory of one of the founders of the guild) dyed by Mama Llama for the guild's 15th anniversary. Tucked into our place settings were bamboo double points, just in case we should want to start something right there. A few did, in fact, and I can't wait to see what they come up with.

The next morning, I took off for Austin. I also took two pictures at a convenience store near the turn-off for College Station. I had to wait to take them because my glasses immediately fogged up when I went from my well air conditioned rental car into the East Texas July. 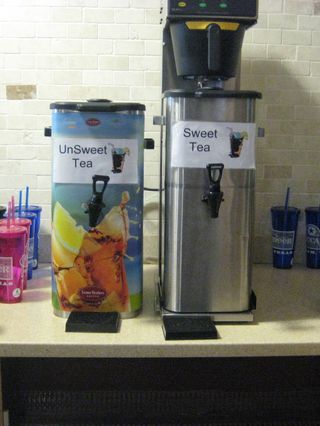 This is one way to tell you're not in the North anymore. 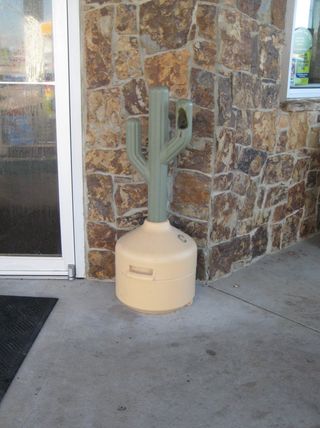 This is the other.

I made it to Austin in good time, took myself out to lunch at Threadgill's, which I miss even more now, and drove down Congress. Then it got, as the Austin Chamber of Commerce says, weird.

* Austin will in another post. First, I have to send the paperwork to the Department of Public Safety.

** If you are a New Yorker, insert New Jersey for Houston. Or if you are a Tennessean, insert Alabama. You get the idea. 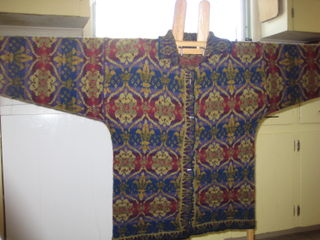 I thought about being all coy, like, "Did I finish it? Read the book and find out!" But, dudes, I suck at coy. Ask anyone I've ever flirted with.  And, so, here she is, on her wooly board in my filthy kitchen. I would have put her outside, to dry in the sun like the Shetlanders do,  but I was afraid she'd freeze. 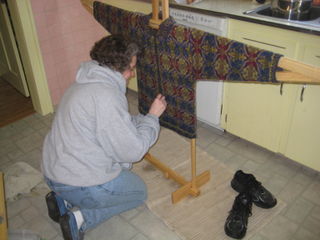 I was either pinning or genuflecting. Your call. 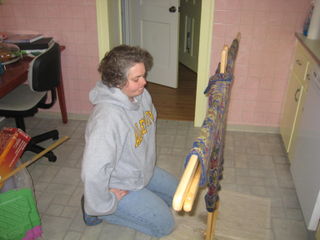 When did I get so gray? Must get some Lady Clarol.

Now to finish up the more mentally taxing portion of the project. By Monday, it will all be out of my hands for a while. Or my brain will have exploded. Either is likely.

i should have been a plumber

Thanks to an evening full of football (I heart Polamalu) and tennis (I heart Andy R.), I had some concentrated knit time. Look! I finished a sleeve! 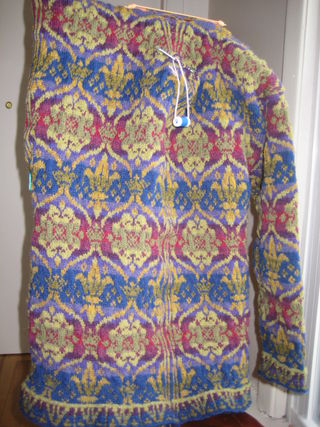 The color is more accurate in the photo below. That dark blob in the lower right is Barney, eater of handknits. 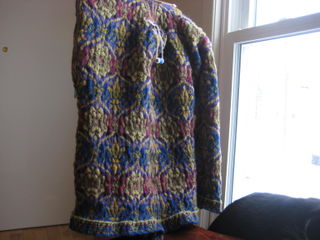 I can't get a decent natural light shot because we are now dealing with winter sun, which never really seems to shine in a satisfying way. I was hoping that the snow would give me some good bounce light but it didn't work out. How much snow? 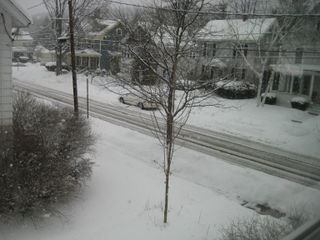 About a foot, as of 9 a.m. this morning. Woo. It's starting to get a little wearing. Good thing we only have three more months of winter to deal with!

The Featureless Saint and I built a very small wall. 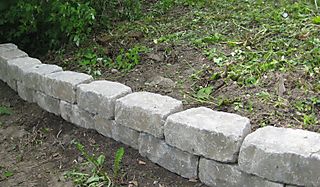 Truth be told, the FS did most of the assemble to this point, mostly because he has more patience with making things level than I do. Now I'll take over and weed/plant/beautify.

Heidi, Joe and their kids stopped by for a quick visit. We (well, not the kids) all went to college together and I don't think we'd seen each other for...14? ... years. A good time was had and plans to do it again were bandied about. Hopefully, it won't be another 14 years.

Progress was made on the sweater: 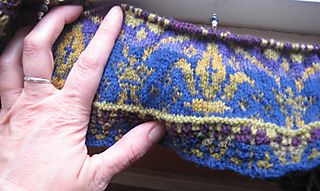 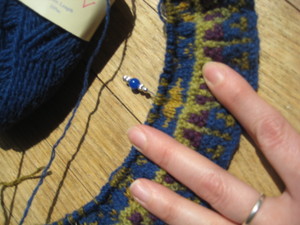 And because my brain is focussed on the worrying (and finals), you get a picture of Trout. He's a very handsome cat, no? 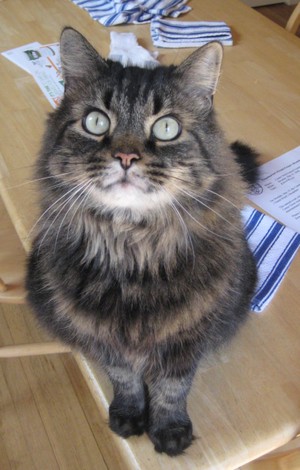 Please keep the suggestions of knitters coming. I have Ann and Kay and Stephanie on my list. Someone suggest Cheryl Oberle, which is a great idea. Anyone else? There must be more. 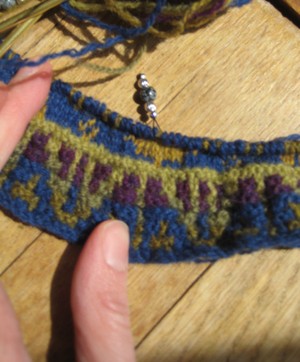 Yup, I'm just zipping along. It is faster now that I'm past the purl rows -- but faster is totally relative.

New sock, which is what I work on when the Mary Tudor makes my brain hurt: 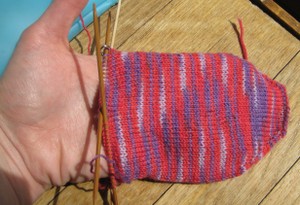 It's Lorna's Laces "miata" that has been kicking around the stash.

This will be going in the stash: 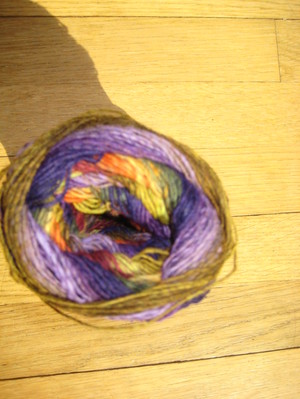 Purchased from my LYS. Even tho Noro is scratchy, I can't resist the colors.

And the promised cat. Barney would desperately like to go outside. The squirrels are mocking him. 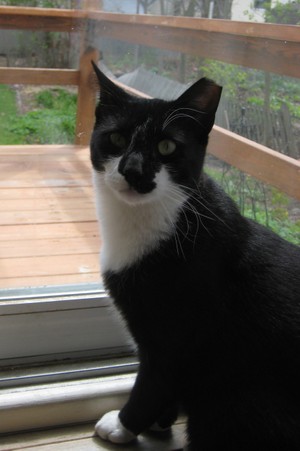 I don't have the heart to point out that those squirrels would kick his ass in nine different ways. Oh -- and that despite all of the green out there, it is only about 45 degrees outside.

Speaking of Barney, Neil Patrick Harris is interviewed at EW.

i got nothin' + wee progress

We have entered the part of the academic year in which I find it hard to not strangle students. "Yes," I want to tell them, "I totally understand your problem, which is exactly the sort of problem you will laugh about in 15 years because it will seem so trivial. But, yes, I understand. I don't, however, care."

I say nothing because I'd like to remain employed, which is one of the few motivators I have left.

So, some pictures, while I grade more fucking papers, a few of which are late because it is hard to be 20. 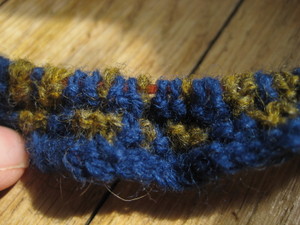 Stunning, isn't it? I'll be done any day now, given my lighting-like speed. You don't want to know how long that little bit has taken. Oh -- and for scale -- that big pink thing is my finger. 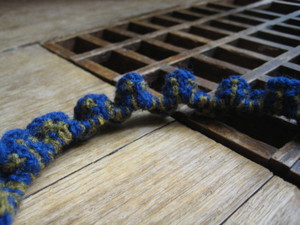 Finally, proof that Trout and the new cat are getting along quite well, thankyouverymuch. 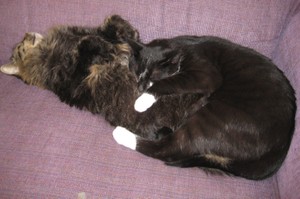 Maybe a little too well.